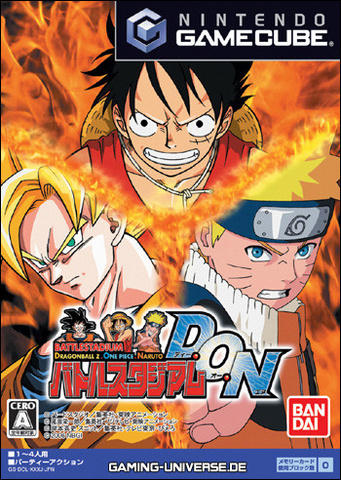 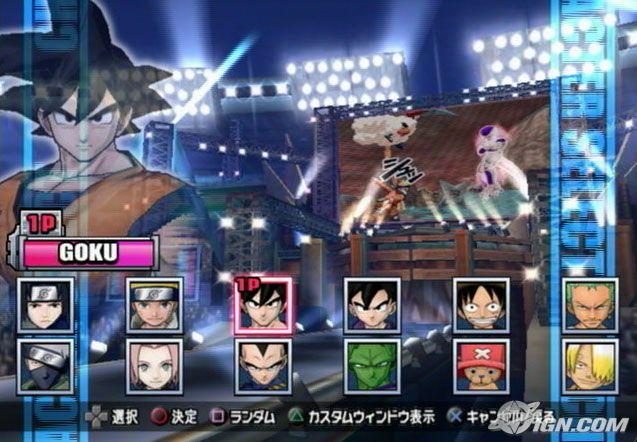 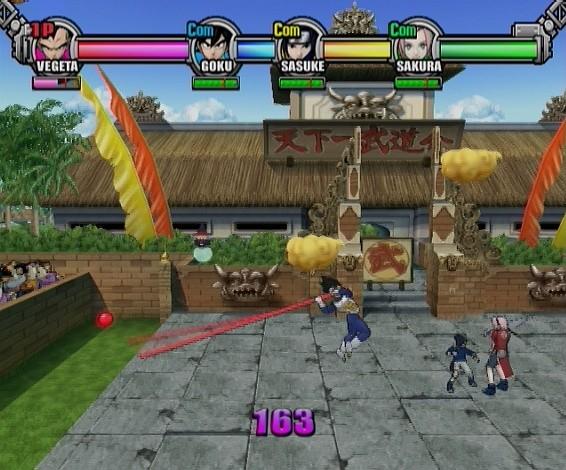 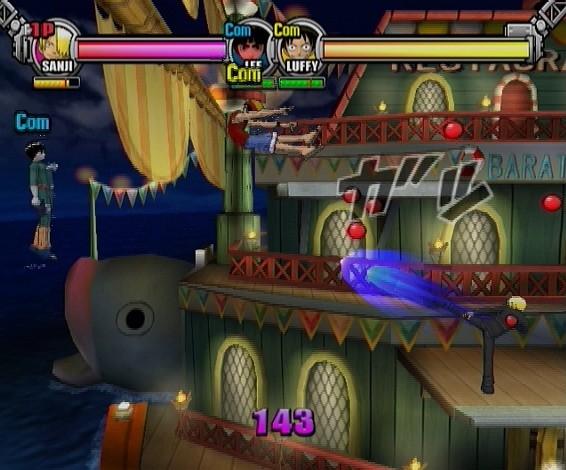 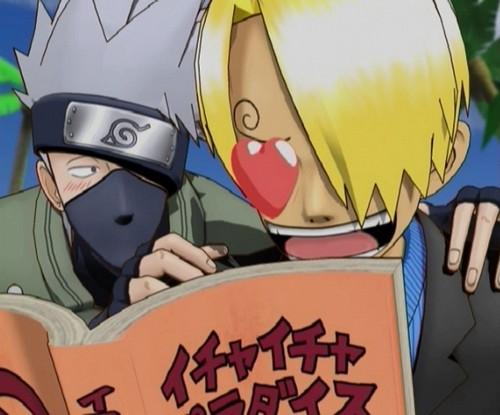 About the game:
Battle Stadium D.O.N. is a multiplayer fighting game (up to 4 "challengers") much like Super Smash Bros...but not as fun. It's available for both PS2 and Game Cube, but GC is probably the better choice since you already have 4 controller ports.

Bandai took characters from the Dragon Ball, Naruto, and One Piece series and voila! You have Battle Stadium D.O.N. This game has only been released in Japan, so you can only buy this game at import video game shops, online, and of course, on ebay. Prepare to pay a hefty price!


Controls:
Controls are very basic, and anyone can learn them. It is very much like Super Smash Bros. You have your regular attack button, special attack button, block, and Super (Burst) attack. You can also chain combos and all that good stuff. The moves are the same for all the characters, they just have different attacks. So once you learn the set of moves for one character, you basically can play with all the other characters as well. I only wish they had combos that were unique to each character, like in Tekken, but hey...one can always wish, eh? Each of the combo chains are about a set of 3-4 buttons, but you can string chains to create a longer combo. The control response time is good and I didn't experience any lagging. All attacks are executed exactly when you press the buttons. When you're stringing combos, you'll sometimes have to time your attacks to connect them smoothly. The only time you'll find the controls a bit challenging is in burst mode, and you're moving way faster than want to.


Characters:
There are a total of 20 characters in this game, but you start off with only 12.

There are 8 unlockable characters (2 from Naruto, 4 from Dragon Ball, and 2 from One Piece).

Your goal is to beat the living crap out of your opponents. Whenever you hit someone, or knock them off screen, they will drop red orbs. Different sizes equal the amount of damage inflicted. The more orbs you absorb, the more powerful and faster you become. Whenever a character is knocked out of the screen, they re-enter the match by aiming and shoot themselves back onto the screen, hopefully either damaging their opponents, or picking up the orbs they lost earlier.

There are no individual health bars or damage gauge. Instead, there's a shared health bar. As you beat up more people and absorb more red orbs, you will take over or fill up more of the health bar. On the other hand, the more you get beat up, the more red orbs you lose, your portion of the health bar will diminish. Once you have the majority of the orbs, you will transform into BURST MODE. You become super fast and super strong. Even your supers become more powerful! For a more devastating attack, you can charge your supers to the max and then unleash its awesome powers. However, keep in mind that you can still lose orbs by getting hit in burst mode, and you'll return back into non-burst mode.

Items will randomly appear, such as a windmill shuriken, bombs, a pole, or a sling shot. There are also items that alters your status temporarily. Some items can shrink you, make you a giant, tie you down to a ball of chain, allow you to jump higher, move slower, or move faster.

There are only 2 ways to win. Either fill up the entire health bar...or just wait for the clock to count down. I don't recommend playing on no time limit, because sometimes it takes forever for someone to win. Not fun.

The game is in 2D but everything is cell-shaded to give it a 3D appearance. The backgrounds and battle scenes are beautiful, and stays true to the manga/anime. I have no complaints here.

Great music and the tone matches the backgrounds pretty well. The intro song is wonderful. I would play this game just to listen to the intro. The intro movie is awesome, too. I love the original cast from these animes, so having the original voice actors are a plus!

I doubt anyone's going to play this game every single day, but it's somewhat fun and unique, and worth adding to your collection. I still play it occasionally when I have friends over who are anime freaks.
Review Page Hits: 1 today (336 total)
mediahook