BC Racers tried to be the next Super Mario Kart, but it wasn't even close. 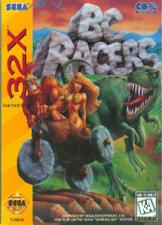 BC Racers is a cartoon-style bike racing game, and it is composed of elements from Super Mario Kart and Road Rash. I will make many comparisons between Super Mario Kart and BC Racers throughout this review. In BC Racers, the player races as one of six different teams of riders. Each team is composed of 2 people, the driver and a rider to the right who can hit other bikers. Sega 32X is the only platform one can play this game on in cartridge format. It was also released for PC and 2 CD based systems - Sega CD and 3DO. Sega 32X's version has more colorful graphics, and the CD versions have better quality music.

BC Racers has a very odd way of organizing its tracks. Please bear with me as I attempt to explain it. There are 4 races, which are divided by difficulty level: Easy, Medium, HARD, and ROCKHard! In the Options Menu, the player can also set the difficulty level of their opponents as Easy, Medium, or Hard. Each "race" (which should be called campaign) is split into 8 heats. Now here is where it gets tricky; while each heat is a different level style and track, the tracks are different for each Race (campaign) even when playing the same heat. For example, Heat 1 of the Easy Race takes place in a prehistoric city, and Heat 1 of the Medium Race takes place in a prehistoric city as well, but the track is different. This effectively creates 32 different tracks, but if the player presses the C Button when selecting the race difficulty on the Main Menu, the tracks can be flipped/reversed. The instruction manual proudly proclaims that this then makes 64 tracks in total.

The gameplay of BC Racers is a mixed bag. While it is fun at heart and there are many different tracks to test your skills on, there are some major flaws that hurt what could have been an extremely entertaining title. Unlike Super Mario Kart, there are no weapon power-ups of any sort, which is a major disappointment. Pursuing the red shell for your arsenal in Super Mario Kart was always fun. Hitting other bikers is difficult since you have to be right along side of them. When playing an unrealistic cartoon racer such as this, having a wacky weapon system would have felt just right. The enemy AI seems to be a bit too difficult on harder tracks. Once you spin out, it is rare to be able to catch up to the other racers. The bikes have a power system that goes down whenever your bike collides with something. If your power is depleted, the bike becomes wrecked and the race is over. You can regain power by grabbing the food that is near the beginning of every track.

The graphics in BC Racers are fine; it indeed has a cartoon graphical style. In fact, screenshots for this game look great. But wait, once in movement, the visuals are not so great. The frame rate is what hurts this game's visuals. While racing, the action scales choppily. It is noticeable, annoying, and ugly; but the game remains playable. The different level styles are adequate, except for the second one. The second heat takes place at night and the player's bike headlights are on to lighten the track, but this was implemented into the game incorrectly. It is simply impossible to sufficiently determine where you are going during this level. Also, the game's characters look fine; even slightly interesting, but they have no personality.

The sound effects in BC Racers are generic. You'll hear standard engine and skidding sounds. Too bad the characters do not have voices, as that may have spiced it up a bit. The music is what I'd really like to mention. It is boring. The game's musicians created goofy scores that were purposefully very slow because they apparently thought it would add to the cartoon atmosphere of the game. If you end up disliking this game (which is entirely possible), the music may force you into a deep sleep. Since BC Racers was already mimicking Super Mario Kart with this title, they should have attempted to copy the musical style of it as well. Oh how I love the upbeat music of Super Mario Kart!

BC Racers is a nice game to play for a few minutes when you want some quick fun. There are plenty of tracks to give replay ability, and there is a certain charm to be found in the cartoon graphics. Unfortunately, the frame rate is quite poor and the learning curve is high due to difficult controls, wacky turn physics, and cheap AI. This title had a lot of potential.
Review Page Hits: 0 today (210 total)
mediahook