Black and White 2 will disappoint some gamers who loved the first game, but at the same time, it's new focus is also going to attract people who didn't like the first game. 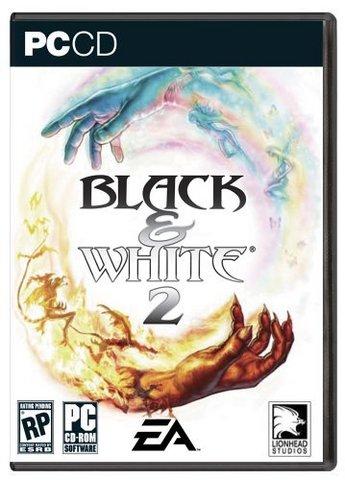 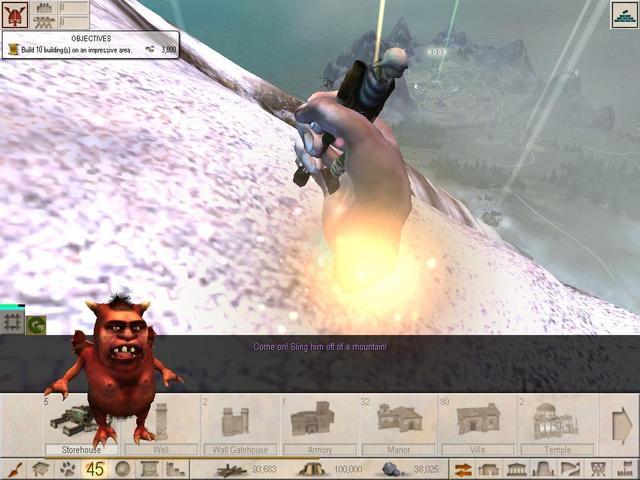 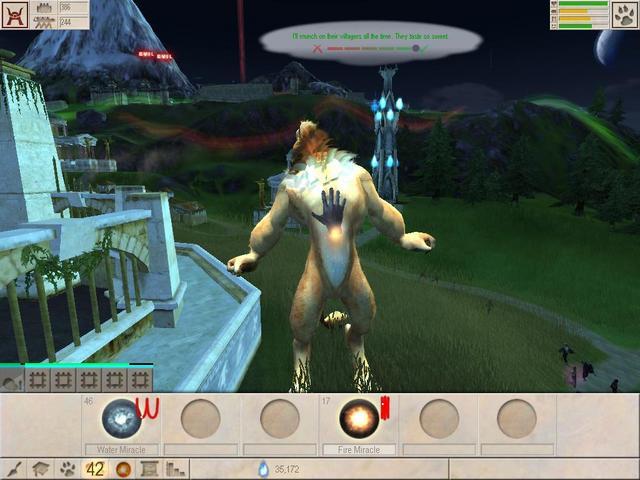 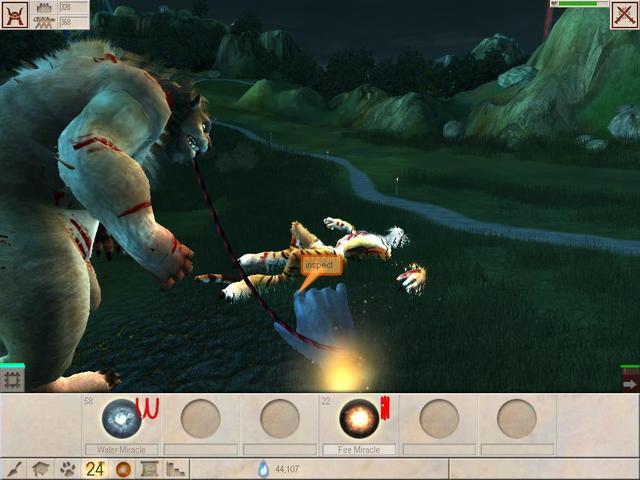 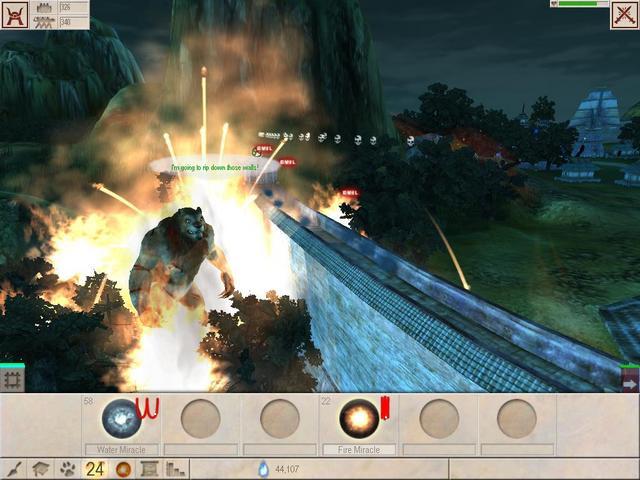 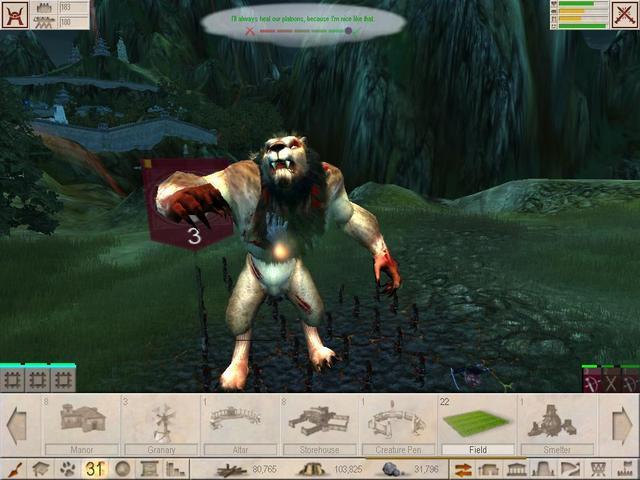 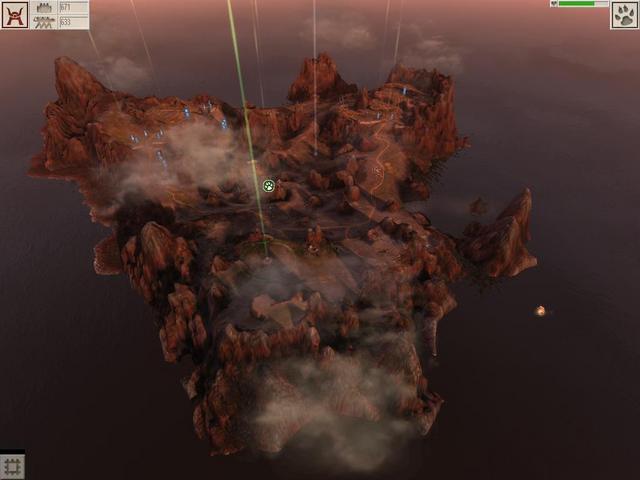 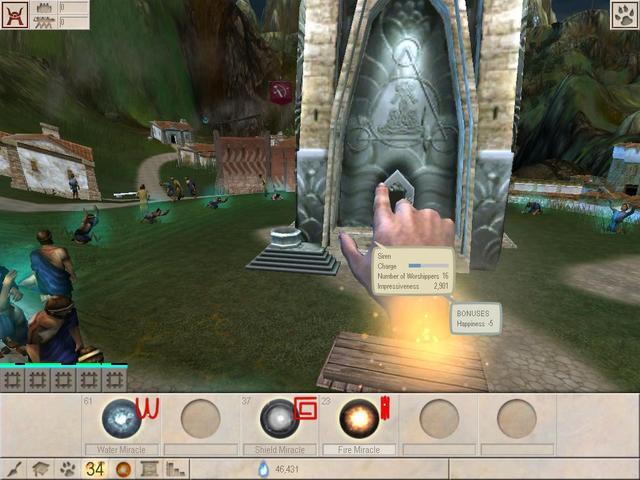 I have some good news and bad news. Bad news first: Black and White 2 is one of those games that a developer changes to try and please people who didn't like the first one. If you've followed the gaming scene for a while, you know exactly what I'm talking about. This decision often alienates the biggest fans of the earlier game, and sometimes can cause more trouble than it's worth with this new mentality to please all gamers. The good news is that in my opinion, while the sequel did remove some of the more charming aspects of the first game, it's still an extremely addictive game that this reviewer found to be as entertaining as the first one.

Any veteran of the Black & White series will notice one of the biggest changes instantly -- the creature training mechanics! If you ever grew frustrated with the first Black & White and a creature who would do the oddest things and never seemed to listen to your training, then this sequel is for you! The creature's thoughts are now displayed in bubbles above his head that will always let you know what he thinks of the environment or your training. While this eases a lot of the frustrating issues from the first game, it also removes some of the personality that creatures seemed to have in the first game. Black & White 2 allows you to pick a cow, wolf, lion, or monkey at the beginning of the game, and while they do have different learning abilities, you won't feel the differences as much as you did in the first game. With the new easy-to-use creature training, it's simple to turn your beast into a machine, and this reviewer noticed few differences among creatures when playing the game with two different animals.

Another change in the sequel is that while good and evil (i.e. black and white) still play a part in the game, it's not as drastic as the first one. If anything, this game encourages you to play as a grey god, not a black or white deity. Gone are the city persuasion abilities of the first game when your creature could win a village by performing good deeds and helping the villagers. Some of the more disappointing omissions in the sequel are the food, wood, and resource generating spells. Creatures are designed more for war than they are for peacetime activities, although they can still play a huge role in resource gathering, city building, and entertainment of villagers. In the sequel, the primary method to win cities over is either through influence, which is built up by establishing an impressive city (if you ever played Civilization III and the culture victory rules, you already have an idea of how it works), or by sending in troops to conquer the city, although the first method is easier (and also considered the good path!) because the residents will migrate to your capital and leave their town uninhabited. The colorful good and evil conscience characters have an encore performance in the sequel, and are probably more entertaining than the first game, especially the devil character.

City management is vastly superior to the first game and genuinely entertaining. There are a number of building types available and as you build tribute -- a collection pool that is enlarged by completing quests and meeting level goals -- you can buy more structures for your city. You can also spend the tribute on creature attributes and miracles if you'd rather focus on other areas, but it is important to build an intimidating city as soon as possible because this protects you from the enemy tribes that are in vast numbers on each level. Some of the best new city building additions are the Wonders, which allow you to perform incredible feats once your worshipers have built up a charge. These cost a bunch and take a while to save up for, but once you unlock them, you have the ability to cast volcanoes in the middle of enemy cities and other impressive natural disasters.

Unfortunately, the story in Black & White 2 is nowhere near the caliber of the first game. While island hopping in the first game seemed to make sense, the sequel feels more like a level-by-level conquest game with a side story thrown in. The creature and god conflict stories that were heavy in the first game are not in the sequel, and instead, emphasis is placed on tribal conflict which, added with some of the new creature management, causes the sequel to lose some of the novelty that the first game contained. While the game does lose some of its predecessor's charm, never fear because the silver quest scrolls are back. Villagers with their corny songs and hilarious requests are still abundant in the sequel and make a gamer remember all the similar adventures in the first game. Black & White 2 is still a terrific game on its own merits, but if you're comparing it to the theme of the first game, you may be setting yourself up for disappointment. If anything, Black & White 2 feels like a creative real-time strategy clone which is encouraging for this reviewer because most real-time strategy games on the market don't do much to separate their product from competitors.

If you're a big online gamer, you're going to be frustrated that the sequel left out multiplayer options in the sequel. This is also rather surprising because Black & White 2 feels like it would make for a much better online matchup system than the first game. Black & White 2 may be following the pattern of other popular strategy games and saving multiplayer for an expansion, but nothing has been confirmed yet. There is also no official toolset included with the game, but if you're familiar with common mod tools, there is already a robust mod community starting up for the game that includes several tools and tutorials. (Check the links in this review for further info.) You'll need to have some prior computer experience to be able to handle these, but if the first game's history is any indication, there should be at least a moderately decent supply of custom levels in the near future.

Black & White 2 is not a system hog, but it's not recommended for gamers who barely managed with the first game's system spec requirements. The graphics have been improved (most noticeably the water effects), but the game doesn't require an impressive video card and like most strategy games, it doesn't have many options for gamers with the latest and greatest hardware other than some additional options such as anti-aliasing. Just like the first game, the thing to appreciate in this game is the artwork, not the graphics. While other games have more impressive lighting and reflections, this game feels like it was truly designed by artists. The islands and scenery are beautiful, and the cities look lively. The creatures have been improved, but in this reviewer's opinion, some of the creatures in the first game looked better. Just like the first game, the creature and city will change appearance as you become more good or evil in your alignment. If you're worried about bugs, this reviewer didn't experience a single crash while playing the game and only a very few brief spurts as the frame rates slowed down.

As far as playing time, Black & White 2 takes a while to play even if you have plenty of free time on your hands. If you're the type of gamer who ignores quests and wants to get to the meat, this game will go a lot faster for you. If you're interested in the silver scrolls, tribute objectives, and making your creature perform in the most efficient manner, you're obviously going to spend several more hours. Replay value is high for this game, especially if you pick a straight good or evil path, and want to play the game in another role. It's also one of those games that begs you to play again because you want to explore some of the options you missed in your first playthrough when you were still learning the ropes of the game. One replay is enough, however, and you'll soon want mods or an expansion once you've learned everything you can about the game which does not take long to do at all, especially if you played the first Black & White.

Because it's a new game, a PC game (we need more PC gamers here!), and doesn't have as much mainstream appeal as other genres, Black & White 2 is going to be difficult to find for a while on GameTZ. If you can score this game now in a trade, consider yourself lucky. It will probably be a few months before some of the best mods are released and an expansion will probably be announced by then as well. My advice is if you're happy with the changes to the series I've described above then go out and buy it now and then either save it if you're in no hurry to find a new game, or trade it and grab it again a year from now when there are more mods and an expansion available. Just keep in mind that it's a sequel that is so drastically different from the original game, that is has the potential to disappoint gamers who fell in love with the first game. Find some more reviews on the web to make sure you don't fit in that category. Otherwise, install this puppy, and be prepared to lose your social life as you get sucked into hours of creative real-time strategy gameplay.

(Screenshots in this review are from this system and are not what your game may look like with better hardware and higher resolutions. Game was maxed out on all video settings except anti-aliasing, distortion and blooming which were turned off.)
Review Page Hits: 0 today (82 total)
mediahook