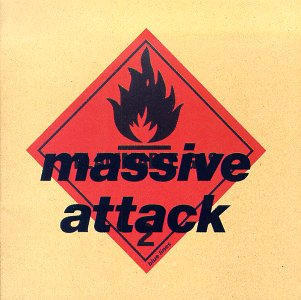 This was Massive Attack's first album. Ten years later, the group has several other albums and a very solid cult following. Massive Attack hasn't had a chart-topper, but it has had numerous commercial and soundtrack appearances, to the degree that even if you aren't familiar with the band name, you are likely to recognize several of the songs off this album or others.

"Blue Lines" pretty much created the genre of trip-hop for most of the world when it was released, so if you have an interest in this type of music, it comes highly recommended. If you are just interested in the band and have not heard any of their music yet, it's always fun to start at the beginning, but perhaps the more contemporary "Mezzanine" would be a better place to start. In any case, ten years after its release this CD still remains somewhat musically advanced and interesting. It's one of perhaps ten LPs that I can say truly changed my listening taste.

Tracks:
1) Safe from Harm - A female voice (Shara Nelson) sings over a somewhat haunting but pretty pop-ish background. If you are not familiar with trip hop this might be a good place to start since it is a pretty mainstream song. Nelson's voice is both cautionary and enticing all at once.

2) One Love - More typical of a Massive Attack song, One Love features a falsetto sort of reggae-infused drone (if you are a fan of Horace Andy I think this is his first major release). The song is not my favorite and I find the lyrics repetitive, but it's also one of the most representative tracks on the album. If you enjoy it, you are likely to love the whole album.

3) Blue Lines - An upbeat, laidback rappy trip-hop song. Very meandering describes both the tone and lyrics. Again, your enjoyment of this song is likely to be a barometer of how much you enjoy the album. Blue Lines a good intro to the type of rap that Massive Attack typically provides.

4) Be Thankful for What You've Got - Nelson returns. Again, this song is sort of catchy in a conventional way and had a video, etc. Be Thankful is more a solid 6 than an outstanding moment.

5) Five Man Army - For my money, this is the best track on the album, but that's clearly subjective. Daddy G opens up the rap and let's just say he is a baritone. This song is perhaps one of the top 10 Massive Attack songs of all time. If you dislike this song wholesale, you probably can dismiss the genre of trip hop (maybe even hip hop?) as not for you. It is a stripped-down and simplified intro to all of Massive Attack's later music. Five Man is in the hall of fame.

6) Unfinished Sympathy - This is a classic. Some people have referred to this song as the "best song ever played on radio." Yeah, holy cow. Nelson returns with her best song on the disc. Her soul just shines through.

7) Daydreaming - Another meandering rap song with Nelson providing the chorus. It's pretty solid when a rapper can incorporate the line "If I were a rich man, idle-diddle-diddle-deedle-diddle-doo" (from Fiddler on the Roof). This is more of a standard-bearer than a highpoint.

8) Lately - Nelson returns, but I feel this is one of the more disposable tracks. Still, her voice is memorable.

9) Hymn of the Big Wheel - This song is totally different than the rest of the album with both electronic moans and whale sounds incorporated to make a really haunting, but fragile ballad. Horace Andy returns to close out the album. I believe this song was used in the Thelma and Louise soundtrack. It is a very memorable song, but not indicative of the rest of the album. Its a great song to finish with though as it has a very uplifting message.

In the end, this CD is best thought of as a beginning. There are better trip-hop albums, but this is pretty much where it started. If that sort of thing appeals to you, it's worth checking out. It also features three tracks (Five Man Army, Unfinished Sympathy and Hymn) that are pretty classic. "Blue Lines" has several songs that have been outdone in relevance (or built upon) either by Massive Attack or other artists since and these songs do not age particularly well. Still it's hard not to recommend an album that, with repeated listening, had the power to change my musical taste.
Review Page Hits: 0 today (400 total)
mediahook