Return to the battlefield in a game that shows nothing new from the original game. Play with the same characters, same weapons and updated story in different locations. 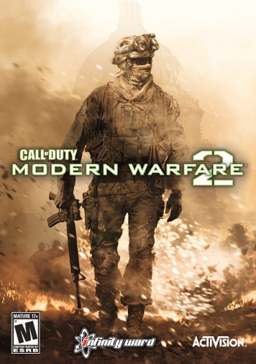 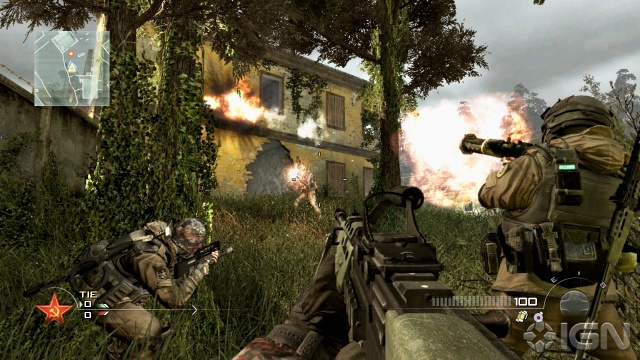 Modern Warfare 2 is an excellent FPS that follows the storyline of the previous title. The story isn't very strong because of the fact you're just trying to find a criminal in a foreign land and then finding a US General to end the game. Seems pretty simple and generic.

The gameplay in this game is very exciting and realistic. From the moment you step foot in the second mission you're immediately thrown into an intense firefight wit the enemy. From here on out the battles are all fun and they never get boring. The missions always seem to throw variety at you so you're not always doing the same thing, in one mission you could be riding the back of a humvee shooting at enemies on rooftops, another mission will have you infiltrating an enemy oil rig from an underwater submarine. You will also encounter enemies in a blizzard and have to escape on a snowmobile and then you will guide missiles via remote control from the Predators. There are about 18 total missions, each having their own unique and detailed environments. Ransacked buildings, an airplane graveyard, an oil rig and even a civilian neighborhood have amazing detail. The powerful graphics allow the player to enjoy such detail to every aspect of the game. Most of the levels also have intel to collect, I'm still not sure what purpose the intel has as far as incentive goes, perhaps it's for multiplayer but they serve no purpose for the campaign.

The weapons in the game are pretty fun to use. Whether you're using the dual wielding akimbo weapons, a shotgun, RPG or assault rifle, every weapon is very detailed and accurate which adds to the realism of the tasks at hand. The explosions and impact of grenades and bullets seem very real and are exciting to look at. The enemies and allies even die accurately and won't twitch like they do in most games. The enemy and ally AI is still very intelligent. They will continue to shoot at each other whether or not you're helping out and will take cover when necessary. The only problem I did encounter was every once in a while a member of my squad will stand right in front of me as I am firing away and cause the mission to end for shooting at teammates. It happens only a few times but it's still frustrating no matter how many times it happens.

The only other complaint is the targeting system, there are times where the automatic targeting system will miss its target or will go to the wrong player but that doesn't happen very often so it's a minor issue. The controls are very easy to use and remember while also remaining very smooth. Even if you don't use automatic targeting you will find it extremely easy to switch from enemy to enemy. Whether you're shooting, driving a vehicle, navigating the Predator missiles or just roaming the environments the control scheme makes you concentrate on the game and not the buttons.

As far as the entire game is concerned it doesn't bring anything new to the table from the original Modern Warfare. The voice acting, graphics, weapons and level design are excellent in this game but it doesn't stand out better than the first game. It's basically the same game with different missions and an updated story.

Modern Warfare 2 features a 1 or 2 player co-op mode called Special Ops. Each mission requires certain criteria to complete and meeting the minimum criteria opens up the next one. The online mode features Free-For-All, Search & Destroy, Demolition, Sabotage, Domination, Team Deathmatch, and Capture the Flag. Modern Warfare 2 offers a bunch of new features not found in the original game so the online multiplayer is what sets this game apart from the competition. That is what will keep fans coming back years from now since the rankings and progression system is very expansive.

Overall this is a pretty decent game, I personally prefer the first game over this one but Modern Warfare 2 is action packed and will not disappoint. If you're looking for an excellent FPS and don't want to spend too much money I'd buy the original Modern Warfare and borrow or rent the second one but either way this is a must play for any FPS fan.
Review Page Hits: 0 today (223 total)
mediahook