GameFAQs on this game
Find it on eBay!

Incredible lack of polish and a very unmemorable story keep this from A+ but that's it. It's a keeper. 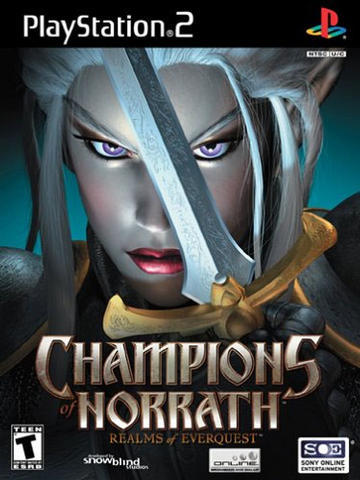 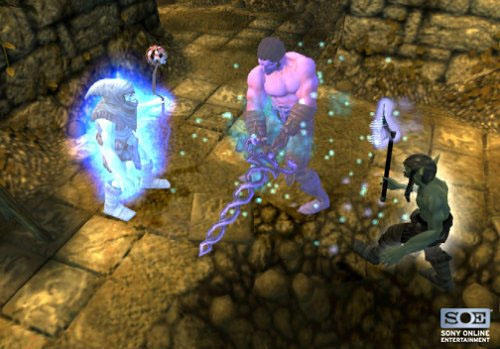 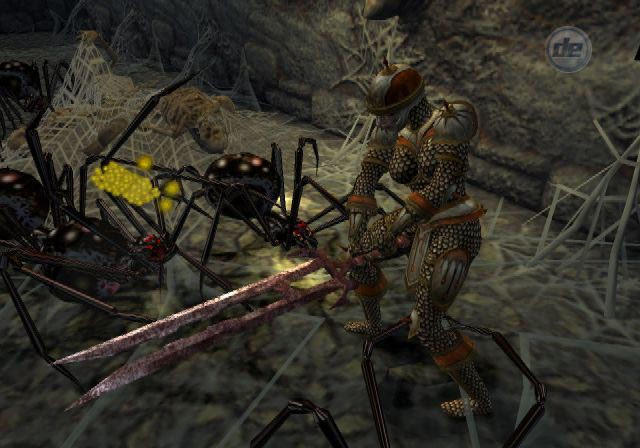 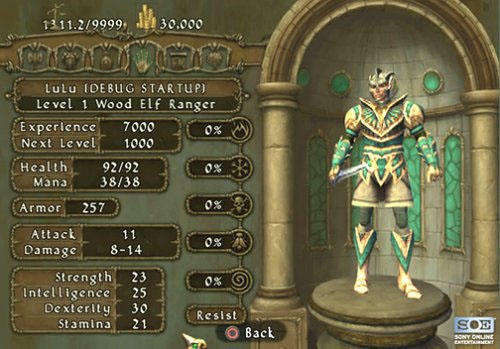 Let's begin by stating the obvious. This game is not as good as Diablo 2. It is WAY glitchier (unbelievable since it's on the PS2 as opposed to the PC.) Its on-line mode is setup as an easier way to access the multiplayer mode when your friends aren't around, as opposed to a full on separate experience as in Diablo II. The number of spells is more limited, and the game play is simplified. Finally, the story and voice acting are not nearly as satisfying. That my friend is why Diablo II is simply an A+, and this game is not. On the other hand, if you can get over this comparison, Norrath really does shine. In many ways it equals its big brother. Also it's really fun to go through a dungeon in multiplayer with your friends around the same TV and even Diablo II cannot boast that feature.

Those of you who played the first Baldur's Gate might wonder how this compares. Snowblind has basically just upgraded that game here. Those of you comfortable with the Baldur's Gate interface will jump in here in no time. The graphics are better and it's a great deal longer. (The first time through should take 15-20 hours or about 2 weeks playing in 2-3 hour bursts.) In addition 4-player mode adds to the furious action and makes the whole experience quite a bit different. The fact that you can play multiplayer either via the multi-tap OR on-line (voice enabled) adds to the chances that you'll actually get to try 4 player at some point.

Game play pretty much goes as follows: press your x button. That is the hit button and you'll be using it a LOT. In addition the triangle and O keys are hot keys for your spell wheel so you can keep 2 spells at quick access. The upper left shoulder button lets you switch between your range weapon (spear, bow) and your melee weapon (club, sword, etc). The other upper shoulder button is block - which you will rarely be using. The 2 lower shoulders allow you to quickly drink mana and health potions to revive your spell casting or vitality respectively. Other than the d-pad/left analog, which is used for movement, you don't really need to worry about much else. The right analog can be used to zoom in or out and to add a floating map in a variety of positions. Again most of the game will involve you either wading into a mass of enemies to slash them apart or picking them off from a distance while using your range weapon or spells, this will depend on the character type you choose but in any case you'll be pressing the x a lot. The one exception is there is an odd vehicular sequence about half way through the game. I wont give it away but it might have been nice to do more of this since I've never seen anything quite like it before in an action RPG.

In terms of classes its pretty standard stuff, magician, ranger (ranged weapons), barbarian, cleric (healing), and shadow knight (sort of a compromise between magician and barbarian). It was quite nice for Snowblind to allow you to be either a male or female of any class - about time for sexy barbarians, rather than simply the sexy sorceress followed by a bunch of brutes. There is also a fair amount of customization available to you right from the start - both in terms of the look and the attributes of your characters. Things like hair, facial expression, skin tone, etc are nice little add-ons to make you feel more in control.

The game is divided into 4 Acts. I found the second to be a bit long, and the 4th a bit short but they each have a variety of settings. (Yes, there is a snow level.

) The monsters are all varied and interesting. In addition to a variety of boss battles that each present a challenge beyond hacking and slashing, you will wade through a variety of different monsters: fire beetles that spew lava, wraiths that command undead henchmen, giant ants (fire ants, poison ants, AND your normal garden variety plain old giants), and plenty of orcs and goblins are just a start. It's not much of a spoiler to say the first vampire (those jumpy little devils) you encounter will bring a smile to your face.

Graphics are a HUGE selling point of this game and there have been major improvements to the engine since Baldur's Gate. The zoom in feature although sort of impractical from a staying alive perspective is totally worth using just to see things close up once in a while. Some of the backgrounds are just stunning, easily surpassing even Diablo II at times. The enemies are the same. Focusing in on a one-on-one moment with a giant spider is highly recommended; just creepy. If you are a graphics hound the game will not disappoint. I tried to find a good image from the "far overhead" view which you will most likely find yourself using but the images I found are overhead and closeup. Still they give you a good idea of the detail.

Sound is also a plus (if not as spectacular as the graphics). In addition to a generally creepy soundtrack that will remind you of Lord of the Rings at all times, the chomping and sledging of enemies usually provides you with aural cues of where to head next.

The biggest problem with this game in fact has nothing to do with any of these things. The game is just BUGGY. I dump this game from a top mark for this reason and this reason alone. I have never had my PS2 CRASH before and this happened 3 times while I was playing this game. When I say crash, I mean I had to press the blue eject button because the green power button was unresponsive. Furthermore there is a ton of noticeable pop in and blackout. Supposedly, the game was meant to be on 2 discs but in the end Sony elected to go with a double density disc. Well, whatever. This was a game that could have been a top 5 title for the platform that instead is *just* a very special game. I would never tell someone not to play this game just because of these factors, but you have got to be aware of them. It's absolutely necessary to save your game periodically or risk a very bad feeling in the pit of your stomach as the words "loading" flash in front of your eyes.

As a final note, the game is great in single player but it is also quite fun as part of a larger party. 2 people are quite good, but 4 are awesome. It does however change the game pretty fundamentally. From what I can tell, if you are on the screen you collect experience, even if you are not killing anything. Furthermore as a party of 4 you will simply cut through many levels in record time. This will be offset by the HUGE amount of time you'll be spending allocating the booty and equipping each character at the store. This ends up being approximately 20% of the game time in 4-player mode since you all have to go back together. If you don't have patience and a sense of humor stick to 1 or 2 player mode.

Once you finish the game you'll have the option of replaying it at a higher difficulty and collecting better items/more powerful spells. There are 3 difficulties in total and dungeons are apparently layed out differently at each difficulty level (though bosses seem to be in about the same place to me; I am half way through a second time). If you felt Diablo's new difficulty levels wasn't enough motivation to play again, this will not work for you either, but I am happy with it.

And that's it. The game is way glitchier than Baldur's Gate, and not as deep (in game play OR story) as Diablo II. Overall though, Norrath stands on its own as the game that any fan of Gauntlet or multiplayer dungeon crawls will want. If you own a PS2 you owe it to yourself to give this one a spin. At worst you will decide the genre isn't for you. If you don't like Norrath it's safe to say you aren't a fan of the action RPG. It's simply that definitive of a game.
Review Page Hits: 1 today (486 total)
mediahook