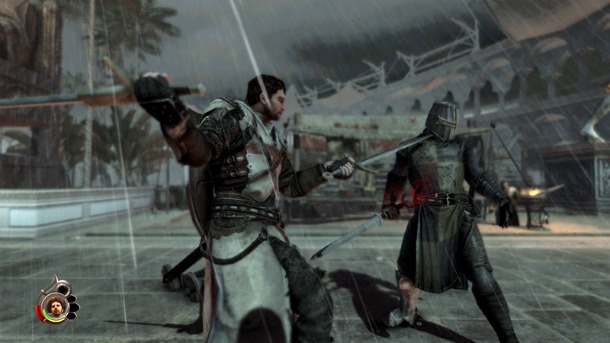 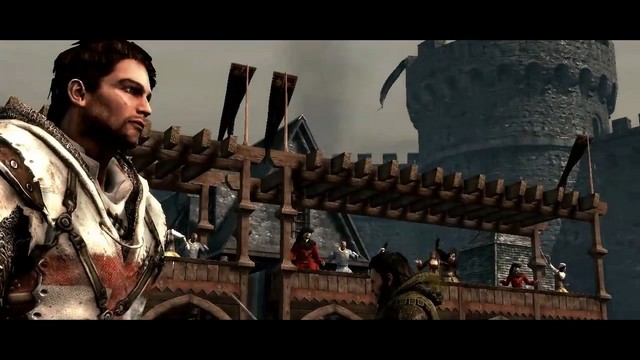 The Cursed Crusade is a brawler-style action fighter that blends a mix of martial melee, ranged weapons, and environmental combat. While it seemingly tries to mimic and even improve upon the mechanics of games such as Assassin's Creed, this game falls short in every regard. Sadly, there is not one single redeeming quality that warrants a purchase or even a rent.

One aspect of the game that is severely lacking is the storytelling. Players will find themselves immediately thrown into a wild amalgam of surreal demonic and "real life" encounters with little to no explanation of why or how events are taking place. The game begins with two warriors fighting side-by-side in some kind of crusade. They later find themselves confronted by an evil entity which also transforms the two protagonists into...evil entities. The player never discovers why, and the lead player just plows on as if nothing happened. Yet the second player keeps asking why they have been transformed into demons during random encounters. Disturbingly, the initial response is most commonly something along the lines of "It's cool bro, just keep hitting stuff. We'll get control over it sometime." The players then shrug it off and the story proceeds to tell us nothing.

Later the two protagonists find themselves without war and yet seeking more war (as if the crusade they were just fighting in together never happened). When suddenly, fortune arrives and the two warriors are solicited with an opportunity to fight in...wait for it...another crusade! Yay!

So the two steadfast heroes (though I'm not sure what they are heroes of) head forward into more murky storytelling and buggy gameplay.

Speaking of bugs, did I mention there are bugs?

Aside from the laughable plot and script writing, the player is forced to listen to voice acting which is almost worse than what was heard in Raven Squad. The sidekick second player thwarts every attempt at sounding distinguished by constantly yelling all of his commands and scripted lines in a Latino voice similar to that of a Cheech and Chong character. With this in mind, it's no surprise to find the Eastern European-themed environment peppered with random bits of Mariachi music, or maybe I'm the only one that finds it odd to listen to funky Spanish beats in the courtyard of a Saxon castle. The game also features consistent audio skipping. Did I mention there are bugs?

The combat is also home to its share of strange errors. There is a talent tree system, designed to allow you to level up your character via means of placing points into tiers of abilities that will further strengthen those said abilities. By placing these points, you are also increasing your potential weapon combos. Sadly, instead of actually performing a combo, you will instead (within one to two weapon swings) find yourself instantly decapitating, disemboweling, or performing surgical limb replacement on said foe, long before any of those earned and applied combo effects ever have the chance to take place. This entirely negates the effectiveness of the combo system. Also, feel free to ignore the weapons that are floating around inside heads and other organs. Did I mention there are bugs?

Speaking of bugs, the environment and camera angles are not immune to them either. There are certain contextual cues which take place such as moving a barrel, opening a door, and shoving a cart that are required to proceed through to certain areas. The execution of these parts is terribly buggy, too. Instead of defeating your foes and moving on to the object in question, one finds themselves instead faced with an object that won't become highlighted until it feels like it. Once highlighted, players must complete a quicktime event. The best method for overcoming these events is frantically mashing the button and hope it recognizes it. Did I mention there are bugs?

For anyone seeking the spoils of war through the thrills of solid and coherent combat enriched by deep evolving storytelling, I suggest you buy another game. However, if you're still intent on fighting through this game, don't say I didn't warn you.
Review Page Hits: 0 today (197 total)
mediahook