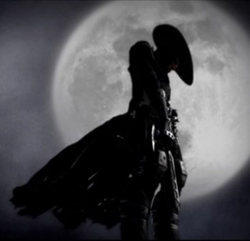 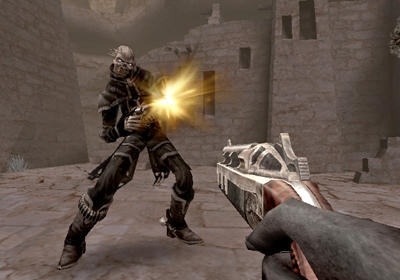 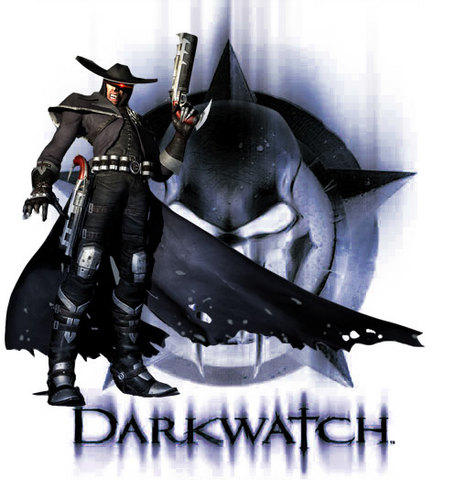 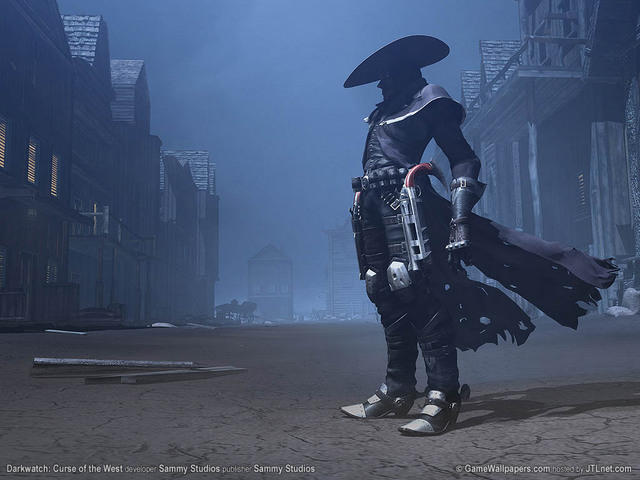 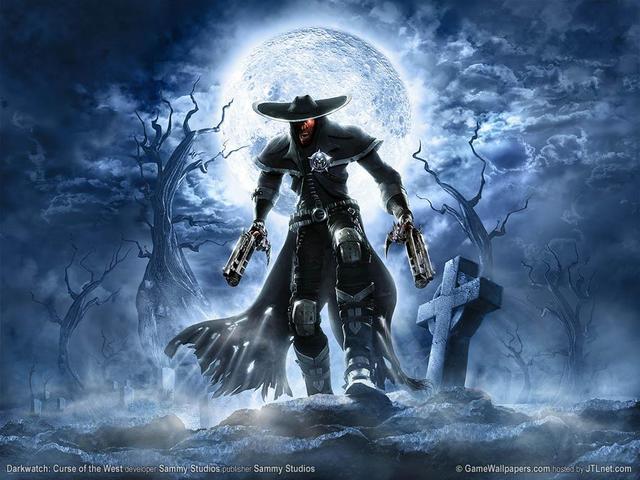 Another stab at the untouched, gaming style of the western era. No Clint Eastwood this time around, and don't expect the Duke to come sauntering in to whoop some ass, but play this game long enough, and you'll feel just as badass as the good 'ol Duke himself.

First off, let me just say that this game could have been a hell of a lot better if they actually took their time on it. But for what they gave us, it's pretty good. I have slight hopes for a sequel, as they sure as hell left room for one. Initially entitled Darkwatch: Curse of the West, you have your classic horror/shooter in the good old days of the Wild Wild West. And no, Will Smith will not be here to save you this time.

Alas, lost cinematics aside, this was a pretty decent game. So lets get down to the grit of it. I'll make it short and sweet, kind of like the game itself.

Story:
As with all shooters, this one is no different in its weakness of lacking orginality. You can grab this plot from most movies, Blade being the first to come to mind. Handing the zombies their butts on a silver platter is none other than Jericho Cross, and as Cross, you'll enjoy every moment of butt handing that you do.

Gameplay:
Good on all accounts. Nothing stellar, just what we've seen in almost every other decent shooter. You're just a vampire with sweet moves, powers, guns, and a reason to kick some serious ass. I mentioned that you get a "God Complex" about half way into it, and I am right. Once you beat the "bad-boy-boss-on-steroids" (which is his second form), you do indeed feel like that; which is a pretty damn good thing in a shooter. You're not invincible, but you sure as hell feel like it. There is one point in the game where it actually gives you a choice of missions that you have to complete to continue. It just gives you a choice of which you want to do first. Riding on horseback is easy, almost effortless, and somewhat fun. Did I mention your horse is a demonic horse? Oh yeah, Black Beauty ain't got nothing on this horse. Your powers that you get depending on your good or bad actions include, Vampire Jump, letting you fly like, well a vampire, while raining hot lead below. You'll also be able to work your blood eye. This baby lets you see weapons, and items in the dark, and allows you to tell the living from the dead. It's like thermal vision for the electroencephalographically challenged (politically correct term for the dead).

Most of the game has a House Of The Dead feeling to it, where you have creatures flying at you left and right, and occasionally have to find cover from zombie snipers. Overall, simplistic, yet loads of fun.

Sound:
Eh, not much to say. There isn't anything in here that will blow your socks off. The usual in any shooter really. No stellar soundtrack or "perfect" gunfire sound effects. The occasional scream here and there from when you blow a demonic flying chick's head off, but hey, who doesn't love that... right?

Graphics:
Again, nothing extraordinary here. Don't expect to see Halo 2 style graphics or cinematics here. Average, and a bit above is all you can expect. But don't let that sway you from playing. As I'll continue to stress, this is a fun game. Not perfect by any means, but still fun to play. The weapons have some decent detail to them, as well as the environments. The cinematics have a nice look to them as well, good use of particle systems and clothing movement effects, as well as good lighting effects.

Something bugged me in one cinematic (without spoilers) where the main character gets it on with this chick. Getting it on didn't bug me, what bugged me is the fact that they're outside on a cliff, she's naked, and he's fully clothed. Seriously, what's with that? How many people actually do that. And on a cliff alone. She didn't even have shoes on, and he still had his guns on his side. That was the only thing that bugged me in the entire game aside from the bosses. Eh, it's overlooked after you grumble enough about it. I have nothing against sex and nudity in video games as long as, 1) It's not over used to the point of stupidity, and 2) You actually do it right. I know you can't show full-on sex (Hot Coffee scandle with GTA:SA comes to mind), but if you can show the chick's breasts, you can at least see the guys naked back, or for gods sake, take off his damn gun, trenchcoat, and hat...on second thought you can leave the hat on, it looks cool...but no guns!

Replay value:
Replay value is very good. Single mission replay mode lets you replay what missions you want, in order to beat them within a certian time/style/manner etc to get bonus items. Just don't play it too much in a row, because you can easily get pissed off at it and not want to play the game for quite a long time. Take this game in portions, it will last longer.

Overall:
Rent this baby if you don't have the crumpled up green stuff to throw away. Buy it if you do. Either way, this is a fun game to play. Definitely not the best looking, but a very fun game nonetheless. I can't think of a better way to kill brain cells than by playing a game that gives you a vampire-God complex whilst killing zombies. Bloody hickey anyone?
Review Page Hits: 3 today (160 total)
mediahook