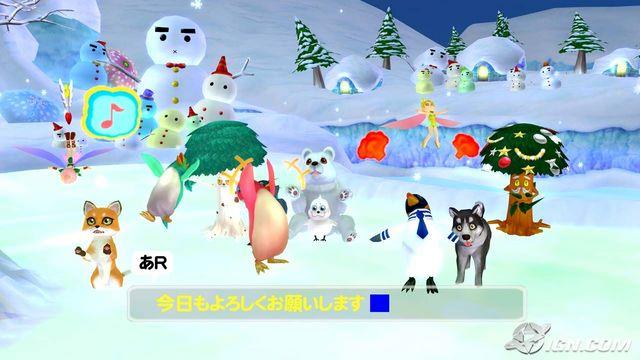 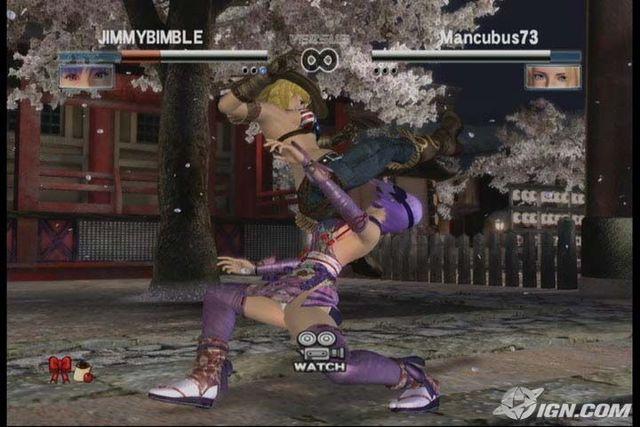 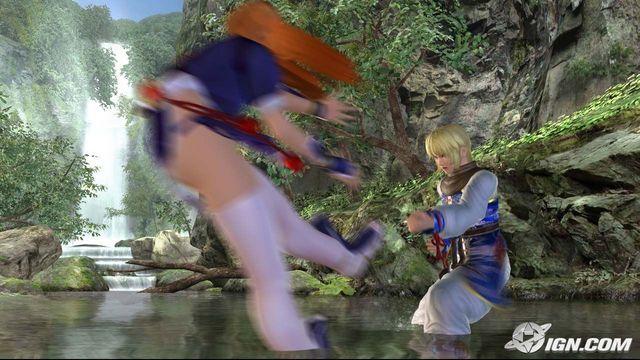 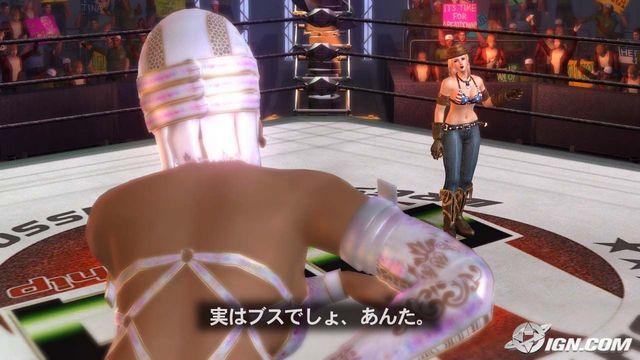 One of the supposed launch titles, DoA turned out to be MIA when the 360 came out. The extra time definitely paid off, though. Team Ninja has put all of its effort into the final installation of the Dead or Alive series and it shows. This game is an excellent glimpse into the future of the Xbox 360 as it delivers with its gameplay and its graphics, although it does fall short in some areas.

Since this is the "Next Generation" of gaming, I'm sure you're all wondering how this game does graphically. This is a tough call for DoA4 because it delivers very well on some parts, but falls short on others. For example, you simply have to see the backgrounds to believe it. They are extremely detailed and run flawlessly without any slow down. Most of them feature a lot of interactivity as well. For example, the 'Experimental Playground' takes place on a island similar to Jurassic Park. You can see all sorts of dinosaurs roaming in the background. You can get up close and personal with the Raptors as you hit your opponent into them to score some extra damage. The Pterodactyl also swoops in from time to time and hits you or your opponent with its outstretched wings. Another of my favorites, entitled 'Gambler's Paradise' takes place in the streets of a Las Vegas-esque place with cars driving through that you can throw your opponent into. The graphics shine in this level with its highly detailed lighting and wet streets. The character models look like they were just pulled straight from DoA3, given some slight upgrades and then thrown into the game. The girls, of course, look as pretty as ever with their overdone "assets" and silky smooth skin and the men ripped and rugged. The problem comes from the characters contrasting with the backgrounds. It just doesn't look right sometimes. They are too simple in the extremely detailed backgrounds. Other then that, though, the characters still look good. They interact with each other perfectly with almost no graphical glitches during the fighting. The only graphical glitches occur with the girls long flowing hair. It moves around unrealistically during the cut scenes and sometimes just slides right through the girls' shoulders.

Dead or Alive has always been a fairly simplistic fighter but this all changes in DoA4. No longer can you button mash your way through the game. The countering system has been given a drastic change and you're now required to be very precise with the timing and direction of your button scheme. Each character also has a larger selection of combos and throws to choose from. You can practice all of these moves in the sparring mode, and even go through an exercise with each character that takes you through the complete list of moves for your character. There are many different game modes to choose from to keep you occupied. You can go through the story mode to unlock the ending movies and new characters. The ending movies are graphically gorgeous, and vary from very funny (Lei Fang) to very sexy (Christie) to very badass (Hayabusa). You get to see the true ending of the game once you beat it with Helena. While DoA is not much of a story driven the game, the final cinematic is actually quite emotional. It's dramatic and action packed. Almost like a movie stuffed into a five-minute cinematic scene. Once you're done with the story mode you still have Time Attack, Survival and the wonderful online mode to play. Time Attack is just going through the game and trying to get the best time. It's fun to try and break your record, and beating Time Attack with all the characters will pay off in the end with some secrets. In Survival you have opponent after opponent thrown at you while you try to survive as long as you can. This mode is fun and challenging and also leads to some unlockables. The game has a tough learning curve, as the computer is amazingly good. It'll definitely take a while to get the counter system down and be able to hold your own against the CPU opponents.

The online mode really sticks out. Team Ninja went to a lot of work to make sure that the online mode was deep and could keep players hooked for a long time. The quick match option finds any available match for you and you can either choose to join or have it find another game. The custom match allows you to search for a game based on your criteria. Another fun thing about the online mode is the lobby. It is very cartoony and adds a fun little element to pass the time between fights. You can use the points you win fighting at Zack's Shop to buy new avatars and costumes for your characters. You can even buy little items to customize your avatar. This is just another example of the extra mile that Team Ninja went to flesh out the online experience.

Sound-wise, DoA doesn't accomplish anything mind blowing, but it doesn't do anything bad either. Most of the tracks are easily forgettable, but a few stick out. The Nassau Station level, which was created for the unlockable Spartan character from the Halo series, features an excellent remix of the main theme from Halo 2. Aerosmith also has a few songs on the soundtrack -- one of them is used for the final cinematic, which helps to add a lot to the experience. The characters voices are well done, with Japanese voice actors and English subtitles. None of them sound overly cheesy or anything.

Ultimately, DoA 4 doesn't do anything to change the fighting genre. But, it does improve upon an already excellent formula. This is definitely the game to own for the 360 right now. It's simple enough to just pick up and play for a few minutes at a time, but it still has enough meat to warrant a $60 purchase. The different single player modes and unlockables are enough to keep anyone occupied for at least 10-15 hours. Add the online mode and you're pretty much set. This is an excellent finale to an excellent series and I can't wait to see what Team Ninja is cooking up next for the Xbox 360.
Review Page Hits: 0 today (582 total)
mediahook