Behold the form of the destructor!... hey, is that a butterfly on his head? With warped humor and novel use of weapons, Crypto avoids being snared by FPS mediocrity. 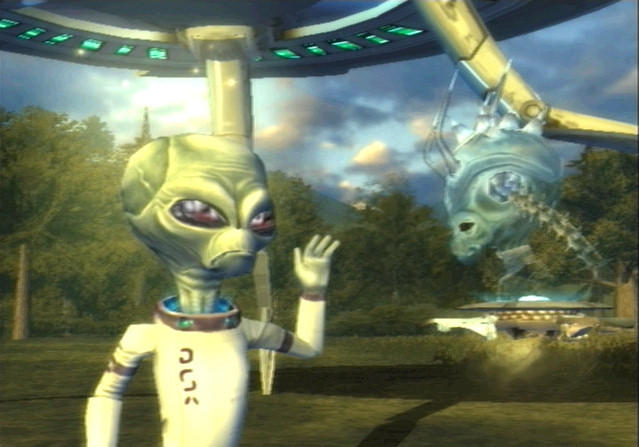 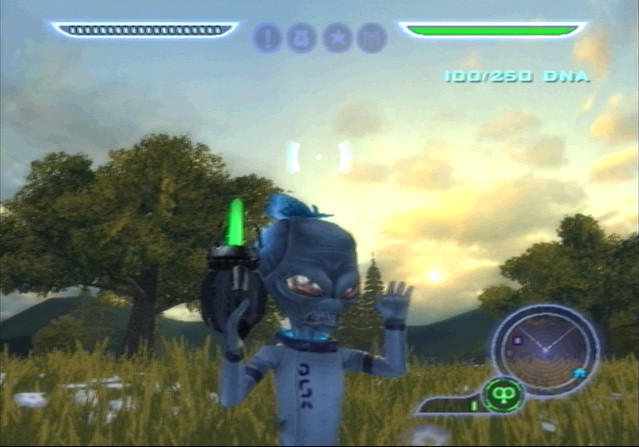 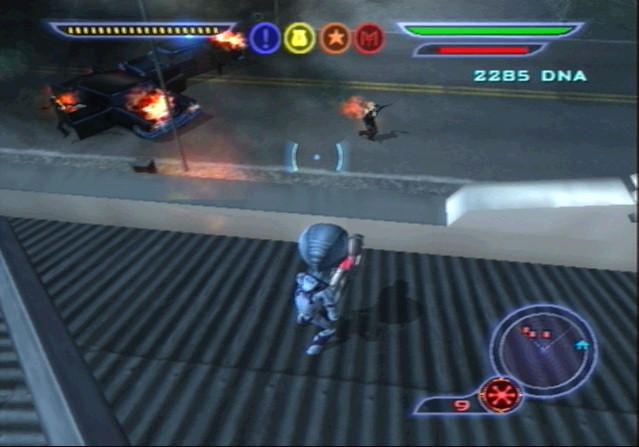 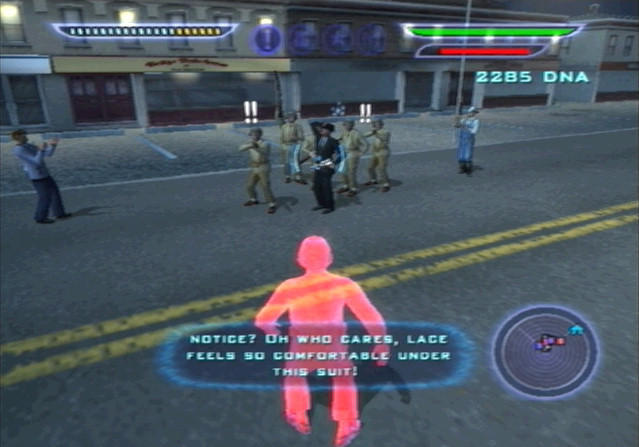 Background: Space. It's pretty vast. Along the way to vaporizing inferior organisms and conquering bold new worlds, warriors of the Furon empire made a little 'detour' and made shore leave on primitive earth. As a result, trace amounts of the Furon genome was... deposited with the inhabitants. In the present, due to massive irradiation, the Furon race is nearing extinction due to their loss of reproductive facilities and reliance on cloning. The DNA has been degraded. New genetic material must be gathered.

It is a scientific fact that the best DNA can be harvested by exploding the heads of organisms and using the juicy brain meats! Make the human race submit, harvest the trace DNA in their brains and level any resistance. And we do mean any.


And Then?: A brilliant game is made that way not because of puerile humor, but in spite of it. Despite the programmer's extolled 'cow poop' scene, philandering ways of the humans and some of their occasionally excessive vulgar language (especially being this is supposed to be the 50's), it's seriously a worthwhile title with some extremely witty humor. It transitions between two modes, ground recon with the 'hero' Cryptosporidium 137 and the above-city destruction with Crypto's UFO. While on the ground, one can harvest brains (which can be exchanged for upgrades), use telekinetic powers to fling loose objects (including people) and vaporize objects to your heart's content. Concerned citizens, police, military and the organization known as Majestic will try to bring the little gray man down. More complex operations involve using the Holobob to assume the illusion of being a human to infiltrate areas without being detected, scanning people's thoughts for passwords and other sensitive information, making people carry out your whims and assassinating societal leaders. While in the lofty perch of the UFO, Crypto can unleash a horde of weapons onto the heads of humanity, leveling buildings, using an abduction beam to toss objects (sometimes with explosive results) and to destroy the country's defenses. This is not to say that the Earthlings are left helpless to your reign of terror... as time progresses they will unleash more powerful and irritating appliances to bring about your doom. Granted all these can be blown to itty bitty pieces, but tesla-coil beams especially can be irksome to demolish.

The world is interactive to a surprisingly high degree. Using Crypto's evil psychic powers, people can be tossed, ground into objects with sickening crunches and flung skyward as they shriek to be put down. He can use mental persuasion to command the inhabitants to act as distractions, sleep or perform feats Crypto would not personally wish to pursue (driving a bomb around, anyone?). Of course he can also mentally make brains pop from their owner's skulls, but one of his weapons is much more efficient for this task. Crypto's chest of arms includes a standard electrical gun for frying, remote detonating mines, a gun of fiery chaos and the anal probe. The probe doesn't sound particularly menacing (violating, yes), but a fully charged shot will pop heads with minimal effort. Granted more sturdy individuals can take a few shots, but having the ability to kill and provide brains to harvest in one go is a wonderful time saver. Because Crypto's height is... quite disadvantaged... he is provided with a jet pack for ease of mobility and to reach higher areas with more of a degree of ease. Stairs do not exist.

Actually, neither do children. The world is inhabited solely by teenagers and adults. Perhaps this would be because of the defensive nature of the public not wanting to see Little Billy's head go 'asplode over his shiny new bicycle, or perhaps because it would just be too cruel. Interestingly one of the earliest builds of the game contained dogs, which were not shown getting blown up, but were capable of being holobobed.

The missions take place in mid to greatly expansive environments complete with mini-missions if the mood strikes you, multiple landing sites and an unending supply of cannon fodder. It's quite disturbing, actually, how many farmers magically reappear in one particular wheat field... where do they all come from? The layouts are rather realistic and well-thought out, with plenty of photogenic spots where an angry gray alien can stare into the vista while unloading electric death on a hapless crowd below. Granted how expansive the vista is depends on many factors. Especially from higher vantages, the draw-in can make aiming or even seeing objects difficult. Still, the frame rate usually stays constant and the pop-up is not deadly awful. Still, one cut scene is especially irksome as an army transport pulls up, first at low-res texture and *BAM!* suddenly at the higher res.

The camera does sometimes hide behind objects, but as it moves with Crypto it never gets stuck nor is it impervious to user input. Because of the full-range motion required in the conquest of a three-dimensional world, it's highly user-controlled. Crypto's movements themselves are highly refined. Rare is it to find a game where the footfalls of a character actually reflect how fast they are treading. Normally walking is out of sync, especially for slow-movement, but in Destroy All Humans it is not the case. All of his movements are matched to his speed. It's a small touch, but the smallest details can make a game more enjoyable. Crypto controls just at a 'midget communist' should, rarely getting hung-up on objects or trapped inside of things. Some buildings are touchy, though. A few objects which should be solid aren't. He can get hung-up on eaves while flying. For the degree of complexity, however, it's not bad at all. Designing games and making the world work properly is a complete misery and to expect perfection is ludicrous.

It cannot be repeated too much, but it's the little things that can make a game the most immersive. The drive-in theatre plays Teenagers From Outer Space (starring Derick, the sensitive martian) and Plan 9 From Outer Space. Some adorably retro 50's pop plays at points. The world is littered with old-style advertising, girls wear poodle skirts and the men like Ike. Butterflies are attracted to Crypto's groovy glowing head. For whatever irksome glitches or valueless humor it contains, Destroy All Humans has a distinct character and charm. In this day an age, what game dares to dream of vaporizing the President of the United States?