This is the ultimate Diablo collection !!!!!!! 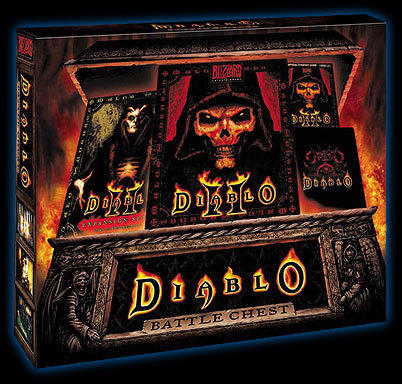 If you want to get ALL of the Diablo games in one nice package, then Diablo Battle Chest is the collection for you!

This great collection includes the original Diablo, Diablo II, and the expansion for Diablo II titled "Lord of Destruction." I have written a review for each of these titles, so I am NOT going to go into any serious detail about them. I am just going to give a brief description of gameplay, graphics, sound, replay value, and learning curve that covers ALL of these games. After that, I will list everything that is included in this Battle Chest. You can check out the reviews for each separate game if you want more details.

Gameplay was very good in these games and improved a great deal between the first one and second one. Diablo II was a much bigger game, and many more quests and areas to explore were incorporated into it.

The graphics remained pretty much the same throughout the Diablo series. Each game had extremely detailed dungeons and environments. One of the things that struck me as pretty neat with ALL of these games is that when the main boss monsters died, they did so with a lot of special effects and stunning graphics. That is always better than them just falling down into a pile of bones and dust.

The sound was excellent in ALL games. Exciting and robust music kept you roaming through dungeon after dungeon. The second game gives you the option of having audio alone or audio and text when talking with non playable characters.

On the whole, the replay value for these games is great. It improves a great deal between the first and second game, mainly due to the addition of more character classes. Also, there were more optional dungeons in Diablo II than the first game that could be explored for more riches and equipment.

The learning curve for the games in this collection is excellent. This is due to the huge strategy guide that is included with this Battle Chest edition (I will describe it further later). The ease at which you can operate the interface and the simple mouse driven commands also make for a high learning curve.

This great collection includes the following:

1.) 5 CDs, one for Diablo, 3 for Diablo II (install, play, and cinematics), and one for the "Lord of Destruction" expansion Set.

2.) Manuals for Diablo II and Diablo II: Lord of Destruction.

5.) Diablo II Ultimate Strategy Guide (this is a 288 page Brady Games strategy guide that covers both Diablo II and its expansion)

By far, the best thing in this Battle Chest is the previously mentioned strategy guide. It's huge, and goes into excellent detail about ALL of the quests for every act in Diablo II as well as Act V in Lord of Destruction. It explains each character class and their abilities. There is a complete bestiary included in it, an items list (both crafted and unique), and many hints as too how to deal with some of the more challenging monsters.

There was only one thing that I considered missing in this Battle Chest, and I think they could have found room to include it. There was NOT a printed manual for the original Diablo game. There is a .pdf file manual on the Diablo disc, but I always prefer the hard copy over the electronic one.

So satisfy your Diablo cravings, and get this Battle Chest ASAP! Trust me, you will not be sorry that you did and you will have hours of enjoyment provided by it.