Diablo is a classic RPG/Action game in which your character must save a small village from the evil hordes that have taken up residence in a dungeon directly under the town. 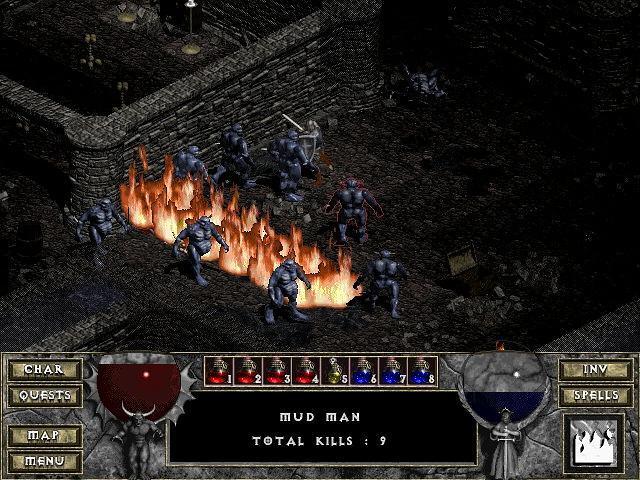 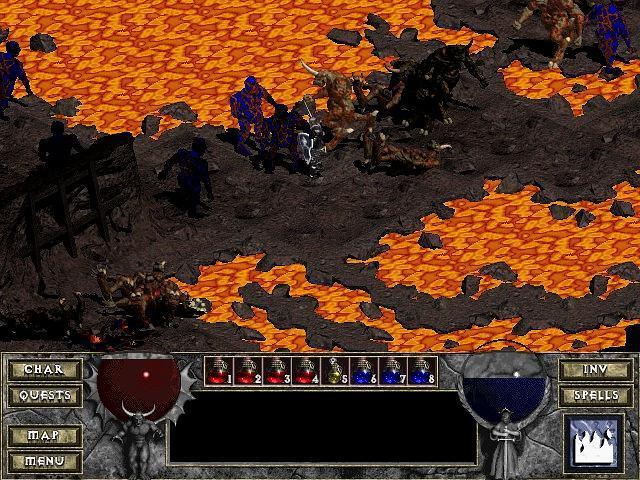 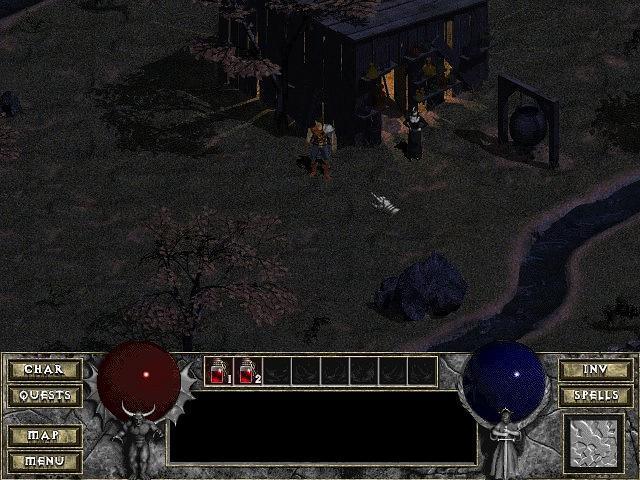 Diablo is a third-person perspective RPG/action game in which the character you choose must save the small village of Tristram from the evil lord, Diablo, and his legions of demonic creatures. The action takes place in a 16 level dungeon directly under the town, where Diablo and his minions have taken up residence.

Before you jump into the hack-n-slash action of Diablo, you must create a character. So after loading the game, and starting a single player game, that will be the next thing you do, character creation. This is one of the areas that I think this game fell short in. There are only 3 character classes to choose from: Warrior, Mage, and Rogue. You only get to choose what class your character will be. You do not get to choose sex, name, weapon specialization or any other stats that might be associated with character creation. I understand that some players may like the simplicity of this, but I, for one, like to have more options. It allows me to feel like I have created a character that is specific to my tastes and desires.

The game begins in the small village of Tristram, and you soon find that within this town is every kind of person that you need to keep you well armed and well stocked of magical potions and spells. There is a blacksmith, a healer, a witch (takes care of any magical needs), and another man by the name of Cain. He will identify items (for 100 gold) and keep you informed of what you need to do next during your adventure. There are other people in this town as well: a tavern owner, a barmaid, and some other townsfolk who may have a quest or two to offer, or maybe some special piece of equipment. But, other than that, they are useless. Once you talk to Cain, you get the low-down of what is going on in the dungeon that lies under the local cathedral. It would be wise to visit the blacksmith next, and arm yourself, because you are about to enter the dungeon and rid it of all the evil creatures that have spawned there.

Gameplay is good, but it severely lacked in several ways. First, I'll list what I found positive about the gameplay. The Town Portal scroll/spell was a very convenient and easy to use feature. It creates a doorway that you can use anywhere within the dungeon to instantly transport back to the surface. As you explore the dungeon, you also sometimes come upon other quick passages that take you to the surface.

The combat in this game was very challenging, with all kinds of evil creatures to slaughter. There are a wide range of monsters: skeletons, zombies, evil mages, demonic knights, and even the lord of evil himself, Diablo (who definitely proved to be one tough opponent).
Most of the gold and equipment that you find throughout the dungeon is dropped by these creatures. But, there are also plenty of treasure chests to be found. Although this game has its share of action, it is not totally without quests for finding specific treasures as well. At times during your exploration of the dungeon, or from the townsfolk above, you will get a quest to find items or eliminate a foe. All of these could be accessed from the quest button.

Nearly everything on the gaming screen is a mouse click away, and you gotta love that !!!!!! Movement and combat is mouse driven. You just click where you wanted to move, or click on the monster you want to attack, and off you go. In-game tools and features are easy to find and use. This really helped with the learning curve of this game. On the bottom of the screen is the following (going left to right):

The inventory screen is where you equip your character with weapons and armor. The following items could be equipped: helmet, amulet, weapon (left side), shield (right side), body armor, and two ring slots. Keep in mind that if you use a two-handed weapon, the shield slot will be unavailable.

This brings me to the points about the gameplay that I dislike. One is the small amount of inventory space for items that you are carrying around, only 40 slots. This is a very low amount to work with, considering that some pieces of armor or weapons take up 4 to 6 of those slots.
The overall gaming area is very small as well. You basically just have the village and the dungeon to explore, you can not venture outside of the village.

Another irritating feature of this game is that saving saves in the same slot, and does not give you any options to choose the slot in which you save your game. So this takes out any chance of going back to a previous save game. You can only load the one that is current. There also seems to be some technical problems that cause the game to "freeze up" sometimes, or completely exit out to the install menu. This may have been due to my cheap computer, though. But, it seems to happen more often during the NPC speech moments.

The graphics in this game are very good. The town and the dungeon are well rendered and extremely detailed. The spell graphics were nice. Each spell has a colorful effect, whether it be a flaming fireball, or sheets of lightning. There aren't many movie cut-scenes that you have to sit through. There is one at the beginning of the game, one at the end (after you defeat Diablo), and another right before you fight the arch-bishop Lazaraus. Your character also changes appearance, depending on what type of body armor he/she is wearing.

The learning curve is the other high mark for this game. As I mentioned before, the interface was extremely easy to use. All of your tools and needed features are assigned an easy access button. There is no tutorial option on the main menu, but I do not consider this a problem for this game. Within a few seconds, you can learn everything you need to play Diablo. Just examine the interface buttons, and see what they do. Even initiating dialogue with NPC's is extremely easy. Just click on them, and choose the dialogue option from the provided list of topics.

Now I come to the worst part of this game, the replay value. The main reasons for my low replay value score are the lack of a large gaming area to explore, and only having 3 character classes to choose from. You can play another character class when you play Diablo again. But, I have played 2 of the 3, and did not really see much difference in the game between the two. There isn't even a difficulty setting in the game options. Sometimes that can provide for a totally new gaming experience, if provided. There is one thing that could help make a gamer want to play Diablo again, and that is the fact that some quests will be available to certain character classes while other's will not.

The sound is good in this game. There are authentic weapon sounds and the magic spells have some exciting sound effects as well. Your character does not have a voice, but all the other NPC's in Tristram have a unique voice to them. The monsters, including Diablo himself, really only have "grunts" and "growls" associated with them. There is pleasant background music associated with the town, but as soon as you entered the dungeon again, you get chilling demonic music playing in the background. One thing in particular that I noticed about the sound in this game, is that it made use of stereo effect sound. You can actually here parts of the music flowing from one speaker to the other, that was nice.

This game does have an expansion pack called Hellfire, and I would suggest you pick it up.
There is also a Diablo 2, and an expansion pack for it called Lord of Destruction. I have the Battle Chest edition of these games, and I plan on writing a review of it. So, look for it in the future to find out what it contains. I will also be writing a review for the sequel to Diablo, so be looking for that once I have played the game. There is also a Collector's Edition of Diablo 2, but I am not sure what extra goodies it contains. You can probably count on the Collector's Edition of having some really great extra items, they usually do.

Although I mentioned several things that I think this game lacked, the good news is that it looks like the sequel, Diablo 2, has addressed all of these problems, and from what I can tell by looking at the strategy guide, it is a much better game.

In conclusion, I would say that Diablo is worth a try. This game has some serious attention given to it when it first came out, and many people praised it as the greatest RPG ever created. I may not totally agree with that conclusion, but I do understand its impact on the gaming world, and it still deserves to be played.