Buy from GameStop
Trade for on GameTZ
Read about on MobyGames

Does Drakengard "Drag-On" or does it "Drag-Past" its problems to become a successful action game? 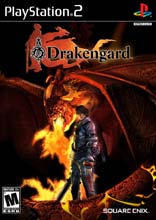 Drakengard is Square Enix's attempt to break free from its RPG reputation and produce a game that is part Dynasty Warriors and part Panzer Dragoon. While much is done right, much is also done wrong. But overall, it's a game worth a rental.

Presentation
A definite upside to the game is how it is presented. Expecting only the best from Square Enix, Drakengard is no exception. Menus are nicely done, giving off the fantasy feel. The game's load times are very quick, and the colors are dark, which is appropriate for a game with a dark tone.
SCORE: B+

Storyline
The story is about a conflict between two sides, the Empire and the Union. You play as the former prince of the Union, Caim. You save your sister from the clutches of the Union, but at the expense of your health. Slowly nearing death, Caim does the only thing he can and makes a pact with a captured, but dying dragon. The pact gives them both renewed life, but they're both bound to each other. While he has to protect the princess, his sister Furiae, and her fiancť Inuart, Caim gets caught up in his disdain for the Empire, often leading to problems between the three. The tale is told over 13 chapters, with many twists and turns. While not as deep as a full-fledged RPG, it definitely holds it own.
SCORE: B+

Graphics
While not drop-dead gorgeous graphics, they are suitable. The character models are nicely done, with a few jagged edges. Enemy design does not get old (well, unless your fighting battalions of the same troops). You have the basic foot soldier, the distinctive general, heavily-armored guards with gigantic axes, and of course, rather large dragons and mythical beasts. Explosions look great as well. However, the game has that "fog of war" effect, not being able to see far into the distance. Thus you'll never know what lies ahead until you move forward. However, the CGI cutscenes are something to drool over. Environments are of the usual breed, from plains and fields to castle outskirts and castle insides. The textures are nicely done, nothing too blurred or bland.
SCORE: B

Sound
It's no Xenogears, but Drakengard's soundtrack suits the game fine. Although it is hard to describe, the music fits every situation well. As for the voice acting, it's not as good as Metal Gear Solid, but not as bad as Resident Evil either. A little above par.
SCORE: B-

Gameplay
What makes a game? The gameplay of course! Square Enix is fairly successful in producing a game that captures both the action of Dynasty Warriors and Panzer Dragoon. Attacking on foot is very straightforward, using one button to hack 'n' slash your way through constantly spawning soldiers, while using another to launch magic attacks. Lather, rinse, repeat. In the air on your dragon, one button launches fire from its breath while another launches a "nuke-like" attack that damages everything on the screen. Weapons range from your trusty sword to spears, axes, lances, hammers, and more. And if melee weapons aren't your forte, unleash some supernatural elemental spells. Burn 'em, freeze 'em, quake 'em. All the casual spells are there. The two problems lie in the control and in the gameplay itself. The controls aren't as tight as Dynasty Warriors'. Sometimes they feel unresponsive as your character continues attacking without your input. With that said, that's what the game is about. Attacking, over and over and over. You advance the story by attacking. It may become real old for people with short attention spans.
SCORE: B-

Replayability
There are many unlockables in this game, including hidden characters, numerous weapons, hidden levels, as well as the ability to replay any completed level at any time. There is much to unlock, but is it worth the constant hacking 'n' slashing?
SCORE: A