Legends of Aranna is an expansive continuation of Dungeon Siege that takes your character on another grand adventure to save the continent of Aranna. 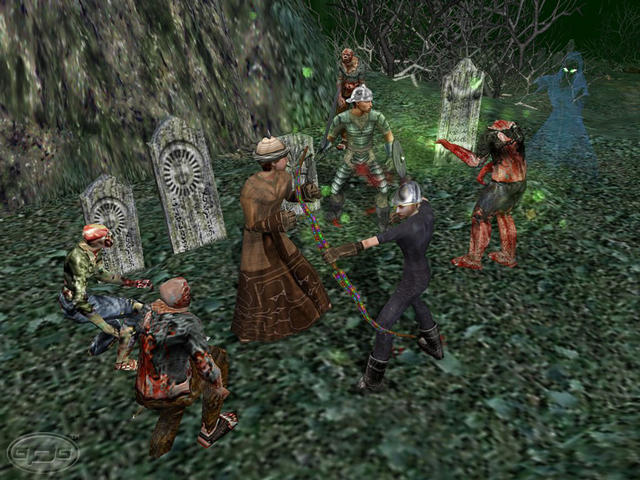 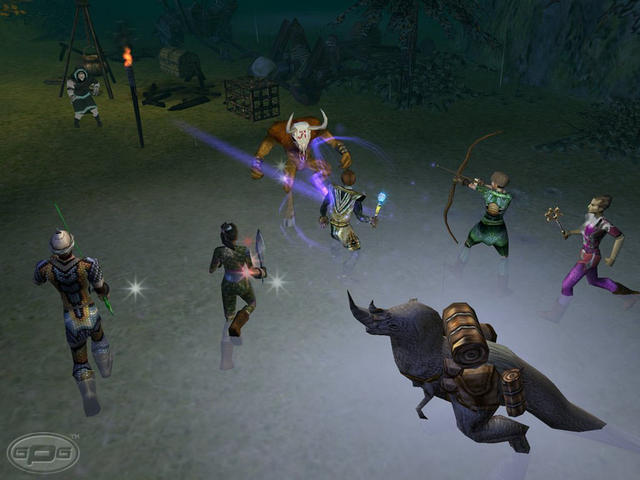 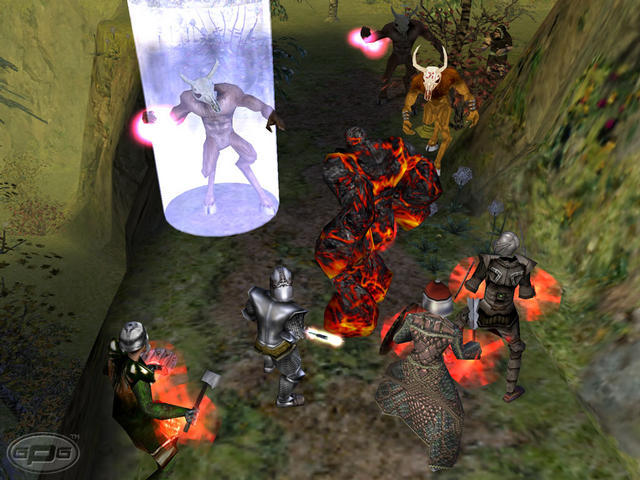 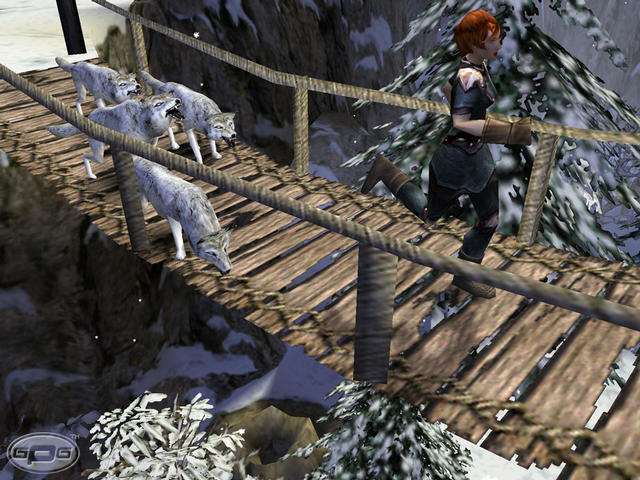 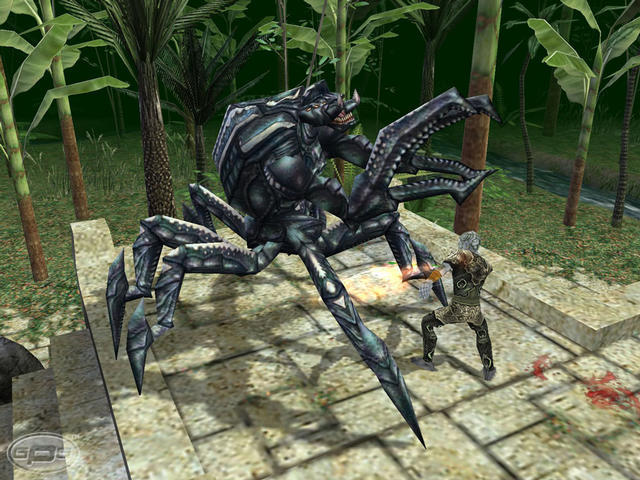 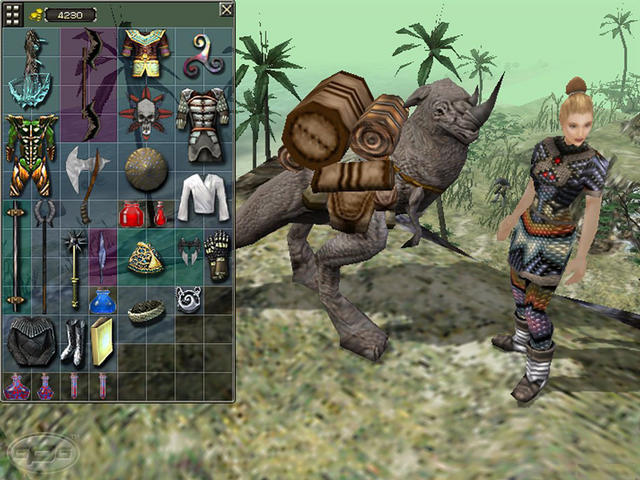 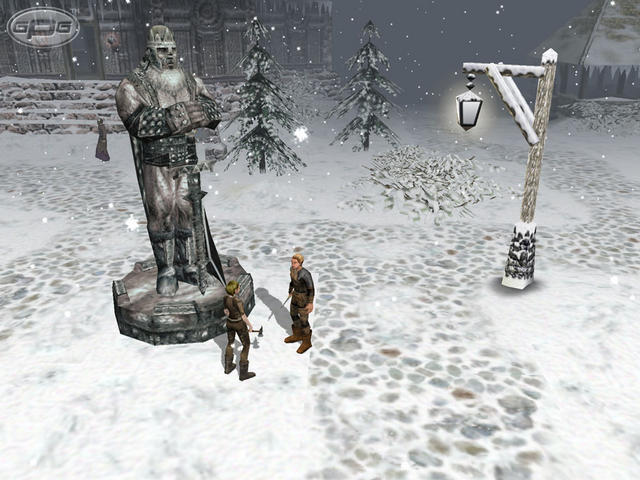 Legends of Aranna is the expansion pack for Dungeon Siege, and you would be wrong to assume that it is a small add-on like most expansion packs. It is a good sized game by itself, and it includes a FULL version of the original Dungeon Siege with this expansion, which is really a good deal.

Your adventure takes place on the continent of Aranna, and as the game begins, you are practicing your combat skills at your family's farm, located in the garrison town of Arhok. You are summoned by the town's mayor, and the adventure takes off from there. The basic story is that a powerful magic staff has been stolen, and you are sent to find it. Along the way, you are presented with many other quests and challenging monsters to defeat. The game comes to a conclusion when you must face the mad wizard who has stolen the staff, and he is trying to use the staff's power to destroy all of Aranna.

The graphics are excellent and are the same quality as the original saga, with environments and cities rendered in great detail. The sounds are great, with ambient sound effects providing a realistic adventure, and a background music score that will drive your party to victory. The NPC's also have unique and entertaining voices, with their own war cries.

The gameplay is very good with plenty of combat to keep your party busy, and a wide range of quests to complete. The interface is very easy to use, with everything you need a mouse click away, and that is the best way to have things set-up. The playing screen is set-up identical to what it was in the original game, with your companion portraits lined up on the left side, and party formations, game options, and health/mana status listed on the bottom of the screen. Replay value is very high because the gaming area is so large that there is no doubt that playing the game again will reveal treasures and areas that you missed the first time around.

There are new races that you will come in contact with during your adventure. Some will be hostile toward you, and others are needed to complete quests. Here is a list of the new races, and a brief description of them:

There are also new weapons in this expansion, including the Sai (a triple bladed dagger), the Jade Staff (made from island jade and magically imbued), and the Gas Gun (a gun that sprays deadly gas). Of course, that means there are new armor types as well, and they include Spidersilk (woven from the silk of giant spiders), Beaded (complex weaving with detailed bead work), and Ceramic (makes the warrior almost invulnerable).

As you might guess, there are also new spells for your spellcasters to use. They include Orb of Frost (a glowing blue orb circles the caster sending shots of frost), Summon Barkrunner (summons a powerful tree-like creature to fight for the party), and Slow Crowd (freezes/slows down enemies). Legends of Aranna is full of powerful new monsters for your adventuring party to try to defeat, and they include such foes as the Scorpiot (giant robot scorpions), Automatons (relentless clockwork figures), or the Fleshrender (ghoulish flesh eaters).

One of the main additions to this game that I hope will be incorporated into Dungeon Siege 2, is the traveling devices known as "displacers". These are convenient devices located throughout the land, that literally "fly" you away to other places on the continent of Aranna. This was a very neat feature, and one that helped cut down on time used to travel from location to location.

In addition to the new features listed above, there are several others that you will enjoy when playing Legends of Aranna, and they are listed for you here:

1) Improved Control Groups - This feature allows you to save any configuration of weapons and spells that any party member wants to use to any number key, and then that set-up can be chosen anytime by pressing that corresponding number.

2) Improved Tooltips - Every weapon's tooltip now shows you the average damage inflicted over ten seconds as well as the price of that item.

4) Transformation Spells - These are spells that transform your spell caster into powerful melee beasts.

5) Orb Spells - Creates a powerful orb of energy that revolves around the caster shooting nearby enemies with whatever the orb specializes in (Frost, Fire, Lightning).

6) Imbued Items - These are special objects that will enhance your abilities in combat. They can be weapons, armor, rings, or any other item that can be equipped. They will show up in your inventory with a purple background to them.

7) Treasure Sets - This is the MOST enjoyable part of this game. This feature alone makes Legends of Aranna worth playing, and I do know that it will be part of Dungeon Siege 2. There are pieces of rare equipment located throughout the lands of Aranna, and if you take the time to look, you can find them all. Composed of 3 to 5 pieces of weapons, armor, rings, amulets, shields, or spellbooks, these sets are endowed with bonuses that can turn the tide of battle. Each item itself has special enchantments, but when you have all the items of a particular set, then you are granted even more bonuses. The treasure set items will have a aqua background color to them.

8) Off-screen Attack Warnings - If a party member is out of your view and under attack, then that member's portrait will flash orange, letting you know that they need help.

9) Localized Attacks - Holding down the Shift key during combat will cause your characters to attack the enemies closest to where you click the mouse.

10) Unsummon Creature and Untransform button - Located on the bottom right of the screen, where the other game options are. This new feature allows you to unsummon creatures you have called to aid you, and untransform yourself back from whatever beast you became. It basically allows you to do this at any time, instead of having to wait until the spell wears off.

11) Glyph Traps - These are traps that you can place on the ground and lure monsters to them, inflicting considerable damage.

12) Group Awareness - If you have not set the AI on a party member, than they will automatically come to the aid ofother party members.

13) Backpacks - This is another one of my favorite features in this game. This item increases the inventory space allowed for each party member. Only one backpack can be used by each member, and of course your pack animal cannot use one.

14) Sell All - This is a new feature that only appears when you are bartering. As the name implies, you can quickly sell all unequipped items for gold. There is also a drop-down menu that will allow you to be more specific about what items you want to sell.

15) Auto-Arrange Improvements - When a character picks up an item, it will be automatically arranged into their inventory. Before you would have to sometimes move items around to make room.

17) World Map - A world map is now available. This map allows you to see the grand scale of Aranna. At the beginning of the game, the map is blank, but as you progress through your journey, more of the map will be revealed.

18) Distinct Party Members - Each member of your party will have their own voice. Sometimes they can be annoying, but for the most part, they provide comic relief. They also have their own war cries, LOL.

19) The Tragg - This is the new pack animal that is available in this expansion game. Another one of my favorite features. For the most part, it serves the same purpose as your trusty old pack mule did, by carrying your loot. The main difference is that this animal is better at defending itself and helping out in combat. It reminds me of a miniature T-Rex, a dinosaur-like creature that has a horn on its head that it uses quite often to try to gore your opponents. Of course in order to have a more combative pack animal, you had to loose something, and that something is inventory space. The Tragg does not have as much inventory space as the Pack Mule did, but the old Pack Mule is still available in this game if you prefer to use them.

So, as you can see, this expansion pack offers A LOT of new features, and will give you a very enjoyable RPG experience. The inventory screen and all the other pop-up screens are laid out in the same manner that they were in the original game, so there is no difference there.

I would HIGHLY recommend this game to any RPG fan, and even to those who do not play RPG's that much. It is a very enjoyable game that can make you stay up to all hours of the night trying to make it to the next area. LOL