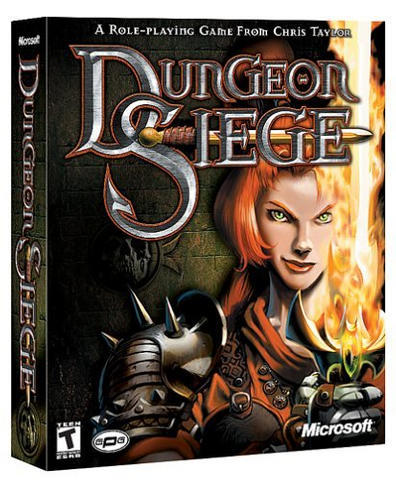 Welcome to the World of Dungeon Siege, a game that will take a lone farmer and plunge him into an epic adventure in which he must save the Kingdom of Ehb from the ruthless Krug and Seck.

So you begin the game as a farmer who is confronted by a dying friend who tells you that the lands you live in, called the Kingdom of Ehb, are being overrun by a terrible race called the Krug (goblin-like creatures). As you progress through your adventure you find that there is also another evil group at work here called the Seck, and their leader, Commander Gom, wants to unleash a horde of evil creatures upon the land you call home.

The only thing you get to adjust about your character before the game begins, is the appearance of him, like your clothes, your hair color, body style, and tattoos, if you want any.
One of the major differences between this RPG compared to other ones, is that your party can be up to 8 members strong, where as most other RPG's allow you only 6 at the most.

There are four different fighting styles that you can practice and eventually master, and those are Nature Magic, Combat Magic, Melee, and Ranged. Of course, they will advance whenever you use that style of fighting, so the more you use them, the higher ranking that style will have. Nature Magic will includes spells like Lightning. Combat Magic covers spells like Fireball. Melee is wielding one handed or two-handed weapons. Ranged is wielding Bows, Flamethrowers, or Grenade Launchers

You start the game alone, but as the game goes on, you will have the chance to recruit other people into your party. Some will join up with you if you agree to help them out with something they need help with, while others will require you to pay for their services, and most of the time it is not cheap, but their expertise can be invaluable to your adventure. They include characters from Rangers to powerful Mages, and they can often turn the tide of battle for you.

Another unique feature this game has is the Pack Mule. As the name suggests, this is a Mule that you can purchase early on in the game that will have the task of carrying ALL your extra equipment that you pick up during your journey, and believe me, you will come across a lot of stuff. Even if you do not end up using all of it, you should save as much as you can so that later on you can sell it to merchants and make tons of money off of it. The only defense that this Mule has is that if a creature does get close enough to it, than it will start kicking at it with it's hind legs, and it will count as one of your 8 companions.

Graphics are superb in this game, and it is beautifully rendered, and everything looks real, the grass, the mountains, the water, and so forth. The sound is also very well done. Every character, including yours, has a unique voice, and all the ambient and surrounding sounds are great and add a lot to the adventuring experience.

Gameplay is good, but could have been better. I think the only thing I disliked about it was that there was a lot of creatures to fight, and not much story telling going on. I think they could have done better by cutting back some on the combat, and adding more to the story.

Learning curve was good, everything was a mouse click away, and that is always nice. You had easy access to features like a quest log, map, inventory, and party control. There is not any kind of training mission, but with such an easy interface, it will only take you a few minutes of playing to master the controls and find out how to get to all the features that you will be using in your adventure.

You only get experience from killing creatures, and they are not counted as simple experience points. Instead, your fighting and magic skills will increase the more you vanquish evil monsters from the Kingdom of Ehb.

Your foes will be anything from the Krug and Seck to wolves, bears, and Goblins who wield more advanced weaponry like Lighting Guns, Flamethrowers, and Grenade Launchers. Once you have defeated these creatures, you will always have lots of gold and items to get from their dead bodies as reward for your hard battle.

The game screen was set up very nicely. You have your character portraits and current spells and weapons listed on the left side of the screen, and on the bottom right are game control options like party formations, AI control, and menu options like save and load games. When you click on the portrait of a party member, you will bring up their inventory screen which will also display their current stats and what level their skills currently are. Although there aren't really experience levels to obtain, you do have "titles" that change during the game according to what you have chosen to master. For example, you may reach the title of Man-at-Arms, Skirmisher, or Magus. The only exception to this screen is the Pack Mule, when you click on it's portrait, it just brings up what it is carrying.

The items you get to change out on the inventory screen include Helmet, Body Armor, Boots, Melee Weapon, Shield, Ranged Weapon, four ring slots, Gloves, Amulet, and a Spell Book which can be opened up to list your current spells in use as well as a list of ones that you can choose from.

Most of the equipment you buy or pick up will require certain levels of Strength, Dexterity, or Intelligence to use, but once again, if you do not meet the requirements then you can always sell them for a nice profit.

So, I would highly recommend this game, it is a very entertaining RPG, and I am eagerly awaiting its sequel.