A LOVE OR HATE GAME - AFTER A WEEK OF PLAY, YOU ARE EITHER SICK OF IT OR ARE HOPELESSLY ADDICTED. 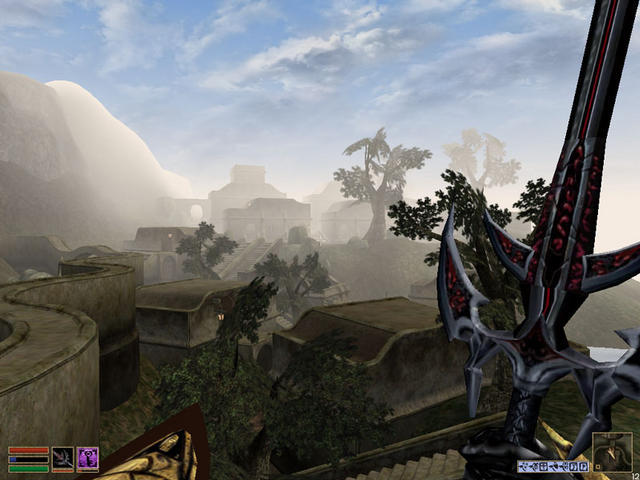 Unfortunately, dialogue-heavy roleplaying games that stay true to an epic scale and living, breathing world are few and far between. On the PC and on consoles, many developers would rather focus on "hack and slash RPGs" such as Diablo, Dungeon Siege and Baldur's Gate: Dark Alliance, which probably cater to a larger market and sell more copies. Every once in a while, though, a company releases an RPG with a grand story and world to explore that may remind someone of the first time they read a book such as Lord of the Rings. The Elder Scrolls III: Morrowind is one of those games.

I have to admit, when I first played this game, I was floored by the beautiful world and scenery. This may be the most "realistic" RPG you'll ever play because it feels like a real world with its breathtaking landscape. To add to this, very few elements of the story are scripted and most of the world can be explored at your own pace. Instead of some RPGs which force you to complete elements of the story in a certain order, for the most part, Morrowind leaves it up to the player to decide. You can pursue a few quests that are essential to the game's story and then suddenly change your mind and spend a week trying to become the master of the local mage's guild. Everything in Morrowind is up for grabs and would-be thieves can make a killing by getting their hands on anything that isn't nailed to the ground.

While this may sound fantastic, there are a few limitations to this game which cause some people to lose the initial awe they experience after a few days of gaming. One thing is that, while there are hundreds and hundreds of quests and NPCs in the Morrowind game world, very few are unique. Many NPCs will tell you the same thing even though they have several dialogue options. Most towns contain about 15% merchant NPCs, 15% quest essential NPCs and 70% filler NPCs. And the problem with the quests is many of them are what the RPG gaming world calls "FedEx quests." This means that most quests will be simple and quick story fillers such as an NPC who asks your character to deliver a package to someone in a distant town, retrieve a package from someone in a distant town, or maybe even assassinate someone in a distant town.

Another Morrowind player once told me that Morrowind is a game that requires a vivid imagination and I couldn't agree more. If you only go by what is said in the game and written in your quest index, you'll get bored quickly. If however you create a story in your mind as you go along, the game becomes much more interesting. To give you a small example, the game allows you to kill almost anyone or steal anything, but that doesn't mean you have to. You can roleplay your hero as a chivalrous knight and give your in-game hero a degree of self-control. Because of it's extreme non-linear design, your adventure in Morrowind is basically yours to create.

The gameplay in Morrowind is easy to learn. The game almost plays like a first-person shooter. Although you can change the camera to an optional 3rd person view, it's much easier to play in the first-person view. Assign a few hot keys to crucial gameplay items such as your sword, lockpicks or healing spells and in no time at all, you'll pick up the magic and combat system in Morrowind. The magic system is practical and all spells and enchantments essentially spawn from a basic spell. For instance, there may be a power called levitate. With different techniques, it's possible to create armor which levitates your hero for thirty seconds, a potion which levitates your hero for one minute or even a regular levitation spell which lasts three minutes. The possibilities are endless.

An extra benefit in the Morrowind Game of the Year edition is the inclusion of both expansions: Tribunal and Bloodmoon. Tribunal adds a new city located off of the main island where the original game takes place. This expansion is heavy on NPC interaction and adds to the story you learn in the first game. Bloodmoon adds an entirely new island to the game as well as the world of werewolves. Both expansions provide plenty of new creatures, armor, weapons, quests, and other fun elements. However, another complaint some people have about the game is that it becomes too easy once your hero reaches high levels and this is a legitimate issue. While the expansions provide new content, you may find that your character is so powerful by the time he or she completes the story in the original game, there's no use playing anymore because everything is too easy. Never fear though because there is one solution: MODS!

Luckily, Morrowind happens to boast one of the best custom content communities in the PC gaming industry. There are thousands of new additions available for download because Morrowind comes included with an easy-to-use toolset which allows players to create new quests, new content and other features that sometimes dramatically change the shape and focus of the original game. Check some of the links in this review and search around as much as possible because there are several excellent mods which make Morrowind a better game. Some mods I recommend include Giants (adds new creatures and spawn locations), Better Heads (adds custom face art which is much better than the original), Ice's Hideaway (provides a huge custom mansion to store all the treasures you find in the game), and Weathered Signs (converts runes on signs to English text). Also check the official site because the developer, Bethesda, has also designed a few mods that you can download for free.

The Elder Scrolls III: Morrowind is one of those titles that gamers either love or hate. Most people are initially impressed by the game but not all of those same gamers share the same joy a week after playing Morrowind. If this game is to your liking, say good-bye to your social life because Morrowind is a title that can make you forget to watch the clock as you spend hours being sucked into its grandiose virtual world.