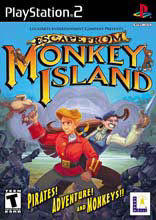 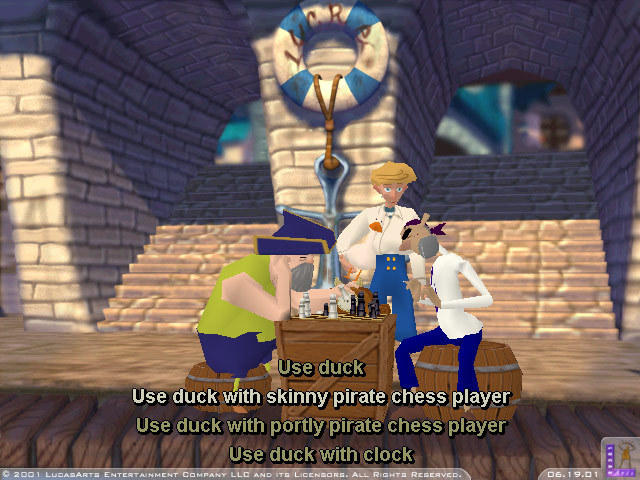 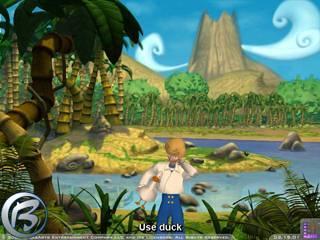 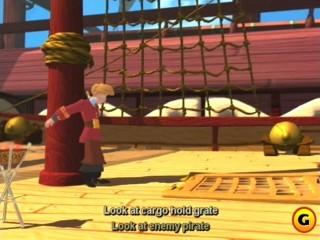 Escape from Monkey Island is the fourth (and probably last) of LucasArts' humorous pirate-themed adventure games. It was ported to the PS2 during the summer of 2001, so those of us lacking a modern computer can appreciate the experience of an adventure game.

The game immediately flings you into the shoes of Guybrush Threepwood, self-proclaimed "mighty pirate" as you attempt to save Guybrush's wife, Elaine, the Governor's Mansion, and all of pirate-kind from the ghost-demon-zombie-politician-pirate LeChuck and Australian landshark Ozzie Mandrill. This is done by achieving goals through a set of tough puzzles.

For example, the first mission sends you to Lucre Island and you get blamed for a bank heist. To beat this part of the game, you need to catch the guy who did it, get the loot, and find evidence that the guy was at the scene of the crime. Accomplishing this requires a ridiculous amount of finding objects that can be used and finding the right people. Hints to the puzzles are usually in conversations with the locals, but are well-hidden.

Consulting a strategy guide may be the average gamer's way out, but doing that ruins much of the experience and the rewarding feeling you get from beating a sadistic puzzle. This is one of my main gripes about this game: the difficulty is way too hard. LucasArts' previous adventures (Sam and Max Hit the Road is the one that I have the most experience with) haven't been easy, but have not been this challenging. This one just is sadistic, but fortunately, Guybrush cannot die, and all puzzles can be reset in case you mess up.

EMI's gameplay is good, but it could be better. The LUA engine that is used in this game is hard to operate at first, but once you get the hang of it, it becomes second nature. LUA is also lacking compared to the SCUMM engine for ease of use, but you could argue that LUA would work better on the PS2, because it is keyboard based instead of mouse based. This game also has no replayability. Once you're done, you're done, and there is little reason to play it again.

On the A/V front, EMI succeeds. The graphics are competent and well-polished, but are lacking compared to later games on the PS2 and rely too much on pre-rendered graphics. The sound is great, featuring excellent, hilarious voice acting and the occasional music chord or two that fits perfectly. The sound effects also work when needed.

If you are looking for a challenge or a classic LucasArts adventure game for the 21st century, EMI is right up your alley. I would recommend a rental or, if you can get it for a low price, a purchase.
Review Page Hits: 0 today (294 total)
mediahook