The classic Cotton series shoots into your Pocket. 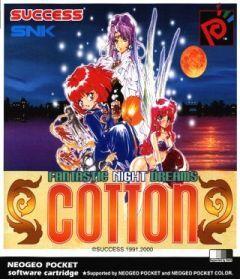 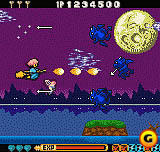 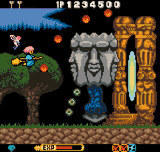 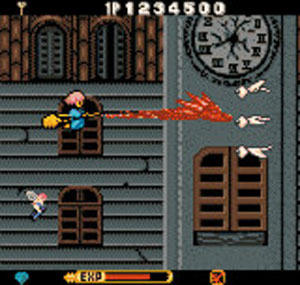 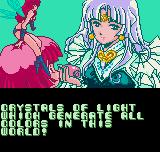 Gameplay & Control
Cotton is a horizontal shooter much like Gradius but instead you play as a witch on her broomstick. You travel through a mystical world getting attacked by all sorts of demon-like creatures. Almost every enemy you defeat drops a yellow crystal that you can collect to increase your experience bar, which gains you larger weapons and stronger attacks. If you continue to shoot the crystals that fall, they will either turn blue or red which are more effective to your experience and against your enemies.

The control is steady and nicely responsive with the analog stick. The A button shoots your horizontal attack while the B button shoots your bomb type attack. Increasing these weapons brings other abilities like a bomb that will run along the ground until it hits an enemy. You also have a fairy companion that fires at your enemies as well. This adds strategy into the mix because you can position the fairy in any place around you as you move in the end creating a larger, more powerful beam or many beams taking up more space.


Graphics & Sound
The graphics are impressive on the NGPC. The colors are plentiful and sharp but the only real character animation is the broom bristles and coat as they move with the passing air. The bosses, for the most part, are big and have more animation. They take up a lot of the screen, a lot of the time, and have some nice attack animations. The sound works. The theme is cute and catchy but does get annoying, and the sound effects match the gameplay nicely.


Replay Value
Since this is a one player game with only a story mode, there's not much else to do once you beat the game. But the game is challenging and regardless, is fun enough to warrant more than one play through.


Overall this is a very fun game and a great addition to anyone's NGPC library. Its rarity and therefore high price may turn some off but I would recommend those willing to pick it up.
Review Page Hits: 0 today (412 total)
mediahook