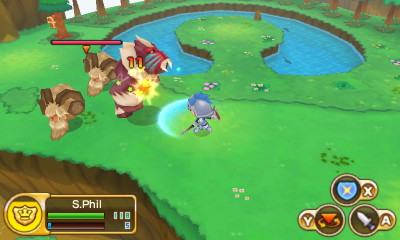 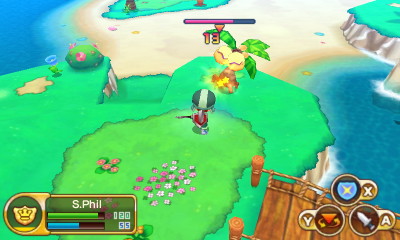 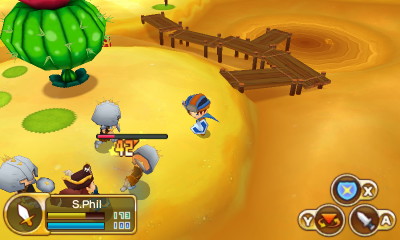 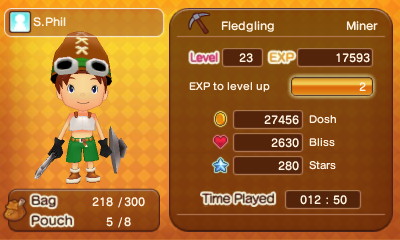 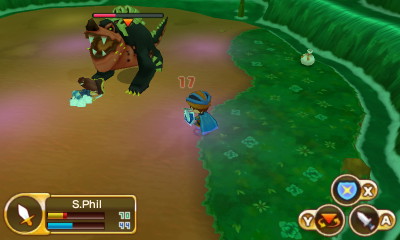 Though the system's library at launch started out anemic and ridiculously slow, we've reached a point with the Nintendo 3DS that it seems every month the system is getting a must-play game. Developer Level 5 has been a big supporter of Nintendo handhelds since the original Nintendo DS. Now with the Nintendo 3DS, their support continues with a charmingly delightful action-RPG with a massive amount of content, Fantasy Life.

Fantasy Life puts you into the game, creating your own personal avatar from a wide range of customization options. After tinkering with your looks, you're thrust into the world, the capital city of Castele, to be more specific, where you meet a strange and curious little butterfly which serves as the talkative part of your eventual partnership. After all, your avatar is like the heroes of RPGs of long ago, totally silent and mute.

The land in and around Castele is dealing with falling meteors known as Doomstones that are plaguing the lands where they crash, causing creatures to become more feral and violent than normal. It's with the assistance of the king and numerous NPCs that the mystery behind these Doomstones is explained.

Fantasy Life's main story mode takes around 10-15 hours to complete, and it's unfortunately mostly just dialogue and overly long chat sessions. Of course, there's moving to and fro from place to place, but most of the time you'll be mashing on the A button to advance the dialogue, though it is rather charming and humorous. There's just too much of it. If you decide to just plow through all seven chapters of Fantasy Life's story one after the other, you very much will get burnt out on the game halfway through, and much more at the actual end.

Thankfully, you can progress the story at your leisure, any time you want. Fantasy Life's abundance of content happens outside of the story anyway. It's through selecting one of twelve Lives (i.e. job types) and progressing from being low skilled to a complete master that the real fun of Fantasy Life happens.

Even though you can select a Life, you're not stuck with that Life for the entirety of the game. Much like advancing through the game's story, you can choose a different Life at your will. You just need to head to a Guild, located in every major town, to switch Lives. Skills learned from a previous Life can be used in a new Life.

As stated, there are twelve Lives to choose from in Fantasy Life. These range from the offensive juggernauts and short-range fighters of the Paladin and Mercenary Lives to Miners that mine ore to be used by the Blacksmith Life to create new weapons, armor, gear, and furniture. Then there are the long-range Hunter (bow-user) and Wizard Lives, Woodcutter, and more.

Also as stated, each beginning of a Life starts you with a limited skill set. To advance to the next skill level, you have to acquire stars from completing certain in-game tasks, as specified by your Life's Master, the person you train under. For instance, starting out, the Paladin Life needs to take out five common sheep enemies on the East Grassy Plains, while a task for a later level of Life mastery requires a Paladin to take out one of the game's much stronger and less common boss-like creatures, such as a formidable dragon. Another task could be defeating such a creature and taking the bounty, a cage imprisoning the defeated beast, to the local Bounty office for a cash reward.

Outside of a number of objectives to complete at different skill levels of Lives, NPCs around Castele and the lands surrounding it sometimes offer a myriad of quests for players to complete. These don't award players with stars, but they do offer prizes like common as well as rare items, and cash rewards. These quests can range from defeating a certain number of a specific enemy to delivering a desired amount of items or materials to an NPC. These quests add even more replay value to the immense amount already available in Fantasy Life.

Combat in Fantasy Life plays out like in typical action-RPG fashion. Offensive-oriented Lives do great in battle, as expected, allowing the ability to unleash deadly combos that deal plenty of more damage than simply attacking with a weak strike over and over again. There's a degree of welcomed timing to have battles be about skill. Harder boss-like creatures encourage a hit-and-run type strategy, as well as a hurt-and-heal type strategy. The latter basically has your avatar attacking without regard for taking damage, only retreating to occasionally heal him or herself.

Depending on the Life chosen, your plan for battle can change dramatically. While a Hunter can attack from far away, this Life's attack stat isn't the greatest. Meanwhile, a Paladin has the luxury of drawing out a shield to defend themselves, while a Mercenary has a stronger attack in exchange for no way to defend themselves.

Overall, combat is fun and doesn't feel overly passive. The ability to enlist a maximum of two NPCs makes it so you need not battle alone, or, better yet, as cruel as this sounds, you have two people to use as decoys, which is particularly great for stronger creature encounters.

The world of Fantasy Life is quite expansive, offering a wide amount of areas to explore. Many of these areas aren't even necessary to explore in the story mode, thus offering some of the game's hardest challenges. There are wide open plains, mysterious caverns, vast deserts, closed-in forests, archipelagos, sandy beaches, and isles in the sky to venture through and traverse.

Customization is heavily supported in Fantasy Life, whether it's custom-fitting your character with different weapons and armor (with each changing the on-screen look of your avatar), or buying or building furniture to put inside one of your homes in Animal Crossing-like fashion. It all adds up to a wealth of options to make your character and your home your way, allowing a great amount of creativity and personal style.

Fantasy Life supports a gorgeous cartoon-like art style with plenty of charm and character. Areas are bright and possess an admirable amount of detail to them, character and creature models are impressive to gaze upon, and the frame-rate usually behaves itself, outside of heavy traffic combat areas. The man best known for his work with the Final Fantasy series, Nobuo Uematsu, delivers a fresh soundtrack with plenty of cute melodies and themes that punctuate the gameplay of Fantasy Life splendidly. It all equals a presentation package that is utterly delightful, especially when looking at it with the 3D slider turned all the way up.

For those looking for an action-RPG with plenty of content to it, Fantasy Life is a great selection for a Nintendo 3DS owner. The story sequences do little to excite, but at least the dialogue is funny enough that it's not worth skipping completely. The real fun comes from expanding each of the game's twelve Lives, eventually becoming a master and beyond for each of them. If this challenge seems worthwhile enough (and I argue it very much is), then Fantasy Life is definitely a terrific game to let you live the double life you've always wanted to have.
Review Page Hits: 0 today (745 total)
mediahook