Excellent Strategy RPG for the NGPC. 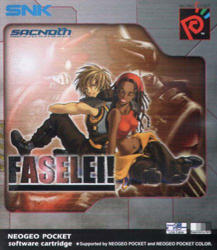 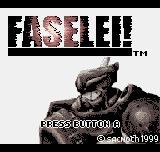 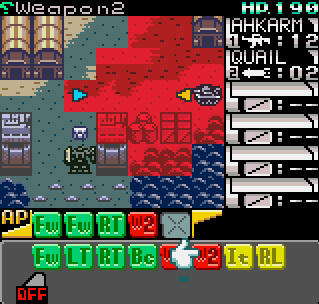 Faselei! came towards the end of the Neo Geo Pocket Color. It was only released in the US and Europe but no manual or case exist for the US release, making the European version very saught after and rare. In the game Faselei is the codename for the 13th division of the army that your character is in but instead of fighter with people, they fight with giant mechs among other equipment.


Gameplay & Control
You always start at your base and from there you can go to many places. Like many mech based strategy and role playing games, you can go to the shop and upgrade from the type of mech to its weapons. Aside from the type of armor and jamming equipment you have a backpack you can upgrade that limits how many items ou can carry, and the size of you CPU that controls how many programs you can have. Deciding on chips is important because it determines what you use during battle, which I'll talk about more with control.

After you buy or sell from the shop you can go to the Dock where your mech sits and where you can customize it with the parts and weapons you bought. Weapons range from assault rifles to rockets, to beams and swords. Going to Command or Task advances the story along and when you finish a task you also get more money to customize your mech further. Finally, the library holds all the information you've gathered so far on various mechs.

During gameplay you control you mech and team in classic turn base style, using the chips you bought in the shop to attack, defend and move on the enemy. This is where strategy plays heavy because even though you have an unlimited amount of times you can use the movement chips, your weapons ammo can run out leaving you sunk in a mission.


Graphics & Sound
The graphics are some of the best of the NGPC. During battle everything is nicely detailed as well as your mech when you customize it in the Dock. Characters have nice animations during the brief, text based cutscenes and its cool to see the weapons fly around the map during battle. The definate highlight of the game is in its sound design. Yes the weapons each have their own specific sound and the music during battle is fast and compelling but the big story is at the beginning. When you turn on the game the first thing you'll notice is that an actual song is play. That's right, this game has voiceovers. Even though the quality is a little low it's still impressive for a cartridge based handheld game to include voiceovers.


Replay Value
The single player story is quite engrossing and well worth at least a second time through. If you bore somewhat from the single player game, there is a Vs mode selectable when you are in the Base. Here you can link with a friend and battle your custom mechs against each other or play a mission.


This is one of the best games on the Neo Geo Pocket Color hands down. From the graphics to the sound to the gameplay, this game is a can't beat. If you aren't into collecting the US version is easy to find and inexpensive. If you are into collecting, expect to pay a pretty penny for the complete European version.
Review Page Hits: 0 today (1,074 total)
mediahook