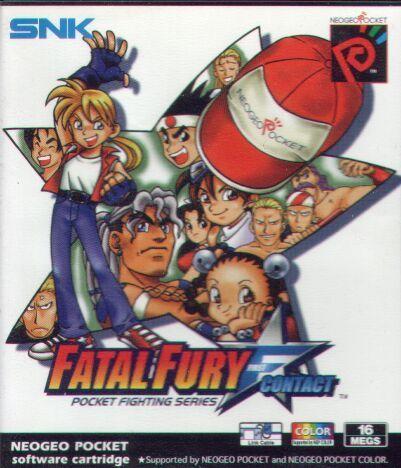 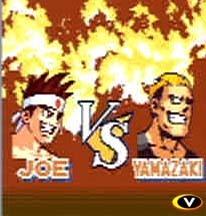 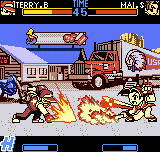 That's basically what Fatal Fury: First Contact is, just another fighter. It tries to be like Fatal Fury: Real Bout 2 for a portable but it falls short of being much more.

Gameplay & Control
You play through the stages battling a different fighter in each. There's a nice combo system here but no points are rewarded. The A button controls punching and the B button controls kicking, and once you fill your power meter up you can perform a power attack. Aside from the one player game you can link two NGPCs together and battle against a friend. Bottom line: the gameplay is really simple and there are no modes outside Vs mode and Story mode.

Graphics & Sound
The graphics do well to imitate Fatal Fury: Real Bout 2 but the backgrounds are rather bland and each character is represented only by one color. Animation like all SNK fighters is smooth, which helps to keep your attention to the match will the lack of color. The sound is adequate but nothing more. There are some nice sound effects and the music works but gets repetitive after a while.

Replay Value
Outside of the Vs mode, there are two unlockable characters, however once you unlock the first (Alfred) all you need to do is hold B while your cursor is on Alfred in Vs mode to unlock the other. The lack of unlockables and other modes really hurt this game the most.

As it already appears, this is just a bare bones fighting game. If it didn't include SNK's signature fighting system than this game would get a worse score but for that it is still fun. The fact of the matter is there is no reason whatsoever to get this game if you have either King of Fighters R2 or Match of the Millennium already.
Review Page Hits: 0 today (1,033 total)
mediahook