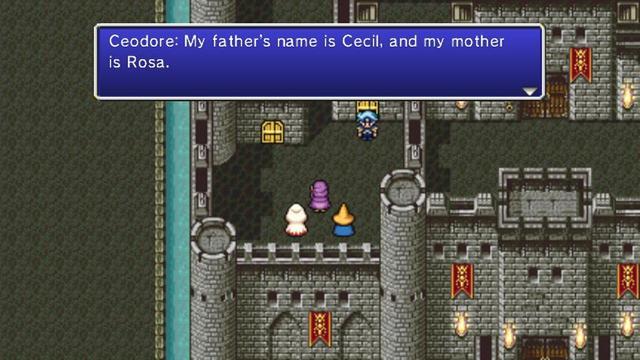 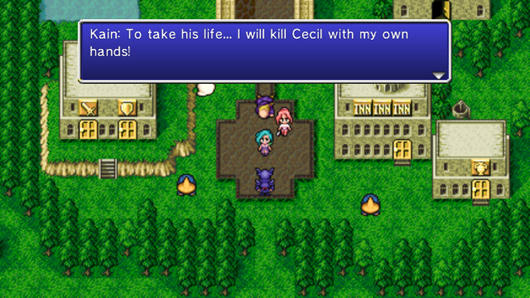 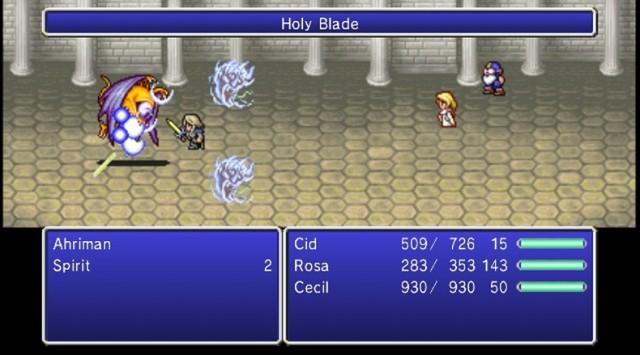 Final Fantasy IV: The After Years takes place over a decade after the events of Final Fantasy IV. Cecil and Rosa are the beloved king and queen of Baron, and have a son named Ceodore. The main tale of Final Fantasy IV: The After Years follows Ceodore's adventure as he tries to earn his title and reputation as a Red Wing of Baron. This isn't the only quest in The After Years; once you've completed Ceodore's adventure, you can purchase more tales (300 Wii points per tale) that feature familiar Final Fantasy IV characters. This is where the biggest issue with the game comes to light. When you finish playing through the central tale, you find out that the storyline isn't resolved; you're left hanging as to what happens next in the story. So basically, in what should be a story driven game, you get an incomplete story experience. The only way to see the full storyline and actual endgame is to buy and download the remaining tales. This gets to be fairly pricey for a Wiiware title that initially costs 800 Wii points, which seems somewhat reasonable. Until of course, you realize you need to blow roughly another $30 to actually have a 'complete' game. At least gamers have been thrown a small bone at the end of each tale though. Once you complete a tale, you can go into Namingway's dungeon where you can find valuable treasure and more powerful enemies. This at least can offer some modicum of replayability to the game once you've completed a tale.

However, the sad part is the fact that the storyline and new characters fail to capture the imagination of the original game. Ceodore is more annoying than compelling at times, and the story doesn't feel as though it's been well thought out. I'd go so far as to say it seems a bit shallow at times. It's as though the storyline was tacked on in order to cause Ceodore to revisit old locales from Final Fantasy IV.

With that being said, the actual game itself isn't too bad. Square Enix didn't change the basic gameplay mechanics of Final Fantasy IV much, except to add a few new features. Veterans of the original will have no problem with the ins and outs of the game. Random battles are still the bread and butter of your gaming experience. At times the encounter rate seems woefully high, which can be somewhat annoying, but this is to be expected from random battles. Compared to Final Fantasy IV, the sequel takes the difficulty level up a notch. It's a bit harder to slog through the game without stopping to level up at some point, but the higher difficulty level makes for a more rewarding experience.

One of the new features in The After Years has a direct effect on the ebb and flow of battles. There are four phases for the moon, and each phase can have positive, neutral, or negative effects on battle abilities. This means in some battles you may have to rely more on brute strength, while in other battles you'll rely on magic and special abilities instead. It's a simple concept to wrap your head around, but it doesn't really do too much to enhance the gaming experience. The other noticeable addition is the 'band system' of attacks. Bands are powerful attacks involving two or more characters. Some bands are revealed through story events, while others are found haphazardly through trial and error. The latter method is somewhat tedious, since characters that are compatible for bands don't necessarily perform one on the first try. Other than that, the gameplay remains faithful to the tried and tested methods used in Final Fantasy IV.

The graphics retain a similar style to those used in Final Fantasy IV, albeit with some slight improvements. Don't expect any crazy stuff, the game's graphics feel like SNES+. However, in flashback scenes, the style switches to SNES sprites used in the original game. I find this a bit bizarre, since The After Years doesn't stray too far from the classic look. Except to pull at nostalgic heartstrings, why bother to change the style?

Fans of the original game will recognize the game's soundtrack, as well as sound effects. Caves, towns, and mountains still have the same music, as well as dramatic moments. I can't really recall any new music in the game, but it's quite possible that any new songs don't really stand out in the pack. Battle and menu sounds are as they used to be, nothing really spectacular, but to their credit, they aren't ear grating or annoying.

Will Final Fantasy IV: The After Years keep you coming back for more? I doubt it. I'm a big fan of Final Fantasy IV; that's the game that got me into RPG gaming. It had a great story with twists and turns, interesting characters, and it left me wanting to know how things were going to end. Final Fantasy IV: The After Years fails in these three aspects. I've played through a few of the tales, but after a while, I found myself losing interest fairly rapidly. The story and new characters are lacking, and I'm not particularly curious to know what happens next. Topped with the fact that each time I finish a tale, I feel as though I've been ripped off because I have to buy another one to know what happens next really takes away from the experience. I would rather have spent $15 or $20 for a complete game that I could finish, rather than small story chunks that feel disconnected from one another for around $30. In the end, if you're a die hard Final Fantasy IV fan, you may as well get the game, but just try to realize what you're getting into. Disappointment.
Review Page Hits: 2 today (402 total)
mediahook