It's an entertaining PS2 RPG, but it doesn't feel like it's up to Final Fantasy standards. 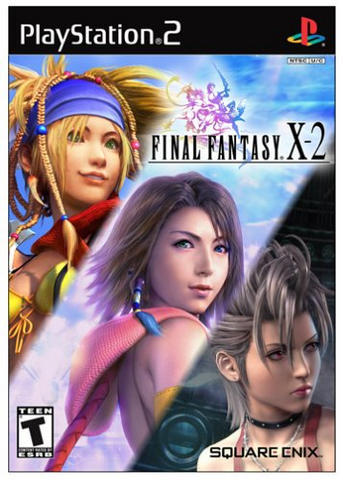 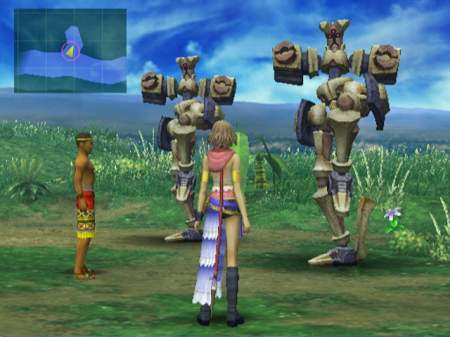 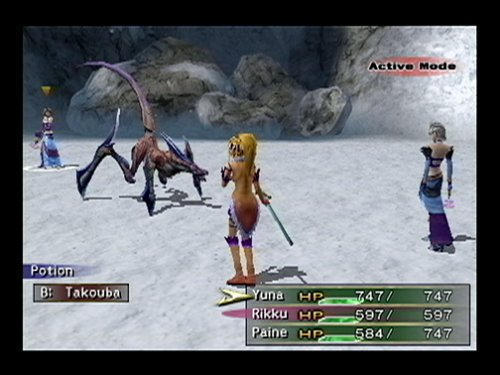 Final Fantasy X-2 begins with a new trio of heroes: YRP! This stands for Yuna, Rikku and Paine who bring an element of upbeat Generation X "girl power" to the series that may repel fans who have always enjoyed the darker stories in previous editions. The mission of YRP is to collect valuable and rare treasure spheres which contain clues to the past technology and history of the world of Spira which is just now starting to rebuild after the death of the powerful demon Sin. Along the way, Yuna is also attempting to discover clues to the whereabouts of her lost lover, Tidus, so fans of the first Final Fantasy X will be excited to know that while Yuna and Rikku now come across as futuristic versions of Christina Aguilera fans, the game does reference several characters and stories from the first Final Fantasy X.

This particular RPG also takes a new turn compared to the first installment. Instead of providing that famous linear direction that many Final Fantasy games are known for, gamers are allowed to pick their missions in the order they see fit. With a brand new airship available to YRP, the sky is literally the limit. There are certain chapter-concluding missions that must be done in a specific order but everything else is fair game. YRP can skip from island to island in any pattern they choose and complete many of the game's optional quests along the way. This becomes important later on in the game because it allows the game to be finished to 100% completion or powerful artifacts to be discovered. It provides an interesting new dimension to the Final Fantasy X duo which will probably be either a positive or negative for gamers depending on your tastes.

By the same token, another new mechanism in Final Fantasy X-2 will also either please or frustrate fans of the series. The ATB combat system is back! Fans of Final Fantasy VII may be delighted, but gamers who enjoyed the CTB combat system in Final Fantasy X (like this reviewer!) will be discouraged. Instead of the more strategic turn-based CTB (conditional turn-based) system, everything is in real-time action. No longer will you know the order of combat as you can be hit at anytime. Gamers will be forced to wait for their bar to fill up before they can begin any actions and the game even encourages you to wait until all bars are full because this allows lethal chain attacks. This new action system adds to an extremely fast-paced combat system which can sometimes be fun, but also limits your variety of actions as most of the game's combat can be resolved with powerful chain attack sequences.

Final Fantasy X-2 also gives gamers a new equipment system based on dress spheres. Unlike Final Fantasy X, which allowed players to make versatile characters with the sphere grid, characters are now more limited in what they can choose. As the game progresses, YRP will find various dress spheres. Each dress sphere allows a certain type of combat. For instance, one dress sphere could be a white mage outfit with all healing powers or it could be a thief outfit with stealing abilities. Your characters are only allowed to wear one dress sphere at a time and each dress sphere has its own experience and leveling grid so your choice of which sphere you will wear is important. Your character can change dress spheres at any time during the battle by moving her place on a preconfigured garment grid, but as the games go on and you find rarer more powerful dress spheres, you will find yourself changing less and less until you find a nice mix that will allow you to complete the game.

The graphics in Final Fantasy X-2 are very similar to Final Fantasy X. Many of the backgrounds are the same only with side characters and quests changed to reflect the new events in Spira. Unfortunately, the game lacks the same abundance of CGI cut scenes that were in the first version. The sounds of Final Fantasy X-2 are about what you'd expect for a Japanese styled role-playing game. The music was probably better in the previous game but the second installment does provide its fair share of production value traits.

Final Fantasy X-2 is a decent RPG for the PS2 but after completing it, it just didn't feel like an epic Final Fantasy experience. There were so many attributes in this game that were done better by its predecessor, Final Fantasy X, that the game sometimes came across as a laborious play. Fans of the Final Fantasy series will still play this game to the end but casual RPG fans who enjoyed the first version of Final Fantasy X may not find the drive to complete it. If you do ever decide not to finish Final Fantasy X-2 but would like to see the ending and the ultimate conclusion of Tidus and Yuna, you can click one of the links provided in this review that will take you to a spoilers anime site which has several of the game's important cut scenes including endings which you may not be able to watch if you don't finish the game with a 100% completion rate.

Right now, this game is one of the more popular PS2 games on the Game Trading Zone so there are plenty of gamers looking to trade it. It's still highly valued so you can expect to trade your fair share for it. If you're a PS2 RPG fan, this is the last single-player Final Fantasy until Final Fantasy XII is released (Final Fantasy XI was an MMORPG), so don't deny yourself a chance to play the latest epic installment in the most famous RPG series in the gaming industry.
Review Page Hits: 4 today (288 total)
mediahook