This game has one goal: to dominate the bottom of the bargain bin. 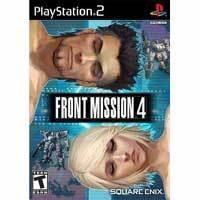 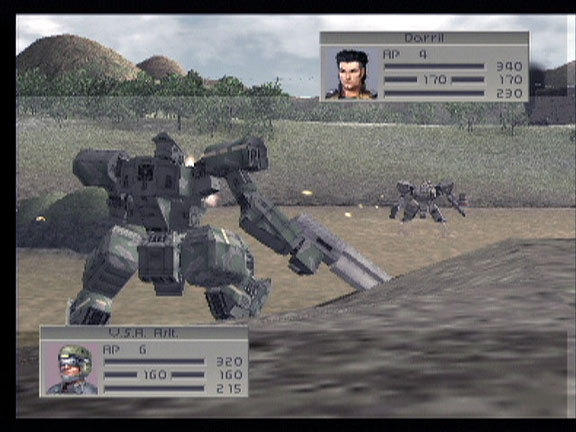 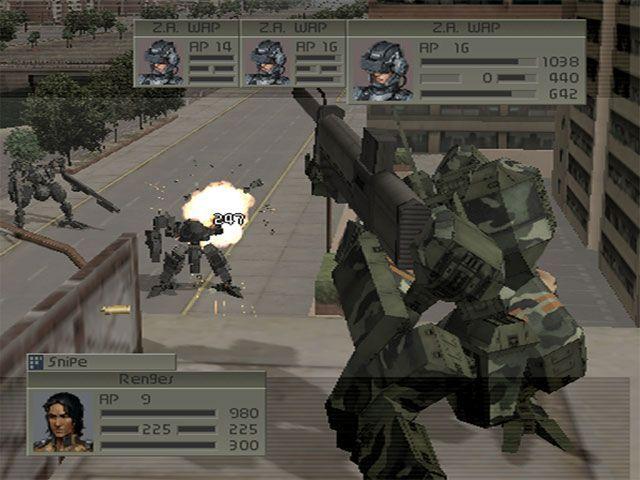 I tried for fifteen minutes to craft a witty intro to this review -- but I cannot seem to do so. Instead of pussy footing around the subject, I am just going to start, punches blazing': this game gosh darn sucks.

Front Mission 3 found its way into my life via a good friend of mine with a huge, disposable income. One day I came over to his house, and out of boredom, he sat me down to play FM3. What I found was a futuristic real world story following a motley crew of odd, emotionally-troubled characters cast inside a rather fun strategy RPG. It hooked me, and still stands as one of the weirder games, story-wise, I have played.

A few years later, development on Front Mission 4 began, and soon was announced for U.S. release. Overjoyed, I was. When the game was released, and the ho-hum reviews came out, I ignored them. Front Mission 3 wasn't a reviewer's darling, so I was hardly worried when the game joined my collection. Little did I know what was in store for me when I finally picked up the game a year later.

Load the game up, and you will be greeted with a stunning FMV of wanzers (the game's name for mechs) and it does an excellent job of pumping you up. Once you start the actual game though, it all goes downhill.

For anyone who has played Front Mission 3, you will instantly recognize the set-up for pushing the story along. Talking heads and text bubbles pasted over boring, in-game graphic wanzers. This time we are provided voice-overs, which are an absolute must since the developers felt the need to keep nearly all the story sequences wanzers only or still-screens only. Hey, saves time and money from actually having to create character models, locales for them to interact with, etc., and so forth. Who doesn't like to save money, even at the cost of quality?

Hey, I can deal with that. I dealt with it for nearly 80 hours when I played through the two storylines in Front Mission 3. But the problem here is that we have changed systems and whatever free passes were given, presentation-wise, are no longer transferable. At this point, the polished up of the graphics from their PSOne days is a slap in the face to a fan, more than anything.

The storyline fares only slightly better. Following a two "main character" arc, we spent time with cover gal Elsa in Europe and Darril in Venezuela. Each character is caught in the middle of a governmental problem (Elsa and economic exploitation; Darril and the effects of puppet governments) and the boiled down themes could hold my interest if they weren't told with, again, a piss-poor presentation and Swiss cheese script that keeps all characters flat and unidentifiable. Swiss cheese grumbles include: why does Elsa, who at the start of the game just became a member of the group "Durandal," seemingly acts as the high ranking officer, yet the true leader Zead just goes along with it or encourages the insubordination? Why is Darril trying to steal 25 million dollars in gold bars? The wanzers they walk around in are probably worth quite a pretty penny alone and would fetch a fortune on the black market? Hiring a script editor to catch discrepancies would be a waste of money when you can just hope your audience is stupid enough not to think that deep, and who doesn't like saving money?

Alright, the graphics suck, the storyline is as deep and meaningful as a Fruit Roll-up, but we still have a tired and true combat system. If the developers are as lazy as this review is setting them up to be, they probably just slapped the Front Mission 3 combat system into 4 and called it a day, right? We can all dream.

Utilizing many of the usual strategy RPG fare, such as grid-based movement, turn-based battles, unit customization, and expansive battlefields, Front Mission 4 rolls them on into a ball, urinates on them, washes it with vomit, and then sells it to us. The A.I. is about as basic as they come: stand pat until the enemy gets close, then attack one unit until someone blows up. Same exact pattern for every single battle. Unit customization is okay, but having to access different menus for everything is unnecessary. The battlefields are quite large, but since the A.I. only reacts to threats once they enter close proximity, the game forces you to waste turns walking the map just to reach enemy units. Unacceptable.

Front Mission 4, as 3 did before, tries to mix up the run-of-the-mill combat experience with what I call "extra math." Special skills can be equipped, and whenever the random string brings up a yes, they come into effect. The same thing applies for the possibility of evading an attack or your attack missing, both of which are affected by the unit's rating in both. When put into effect though, it feels like some code was left uncorrected or just unwritten. Attacks with high accuracy ratings miss far too often or are evaded with the same frequency. Which might have just been an annoyance if the computer wasn't constantly more powerful, making each missed attack that much harder to recover from. Who cares about lopsided battles, idiot A.I., and broken code when we could just ignore them, not exceed our budget, and reap the currency benefits?

I think you catch my drift.

The only thing Square was looking to do with this game is make a quick buck. There is nothing in this game that showed me anything less than that. There is mediocre and there is pathetic; this is by far a pathetic piece of trash that isn't even worth the bargain bin price it fetches nowadays. Stay far, far, FAR away. Just like Hans Moleman, you can ask for wasted time back, but no one will listen.
Review Page Hits: 0 today (316 total)
mediahook