"Ah...Geetaru Man!"-- The first words you hear when you power up the game, and you'll never forget them. 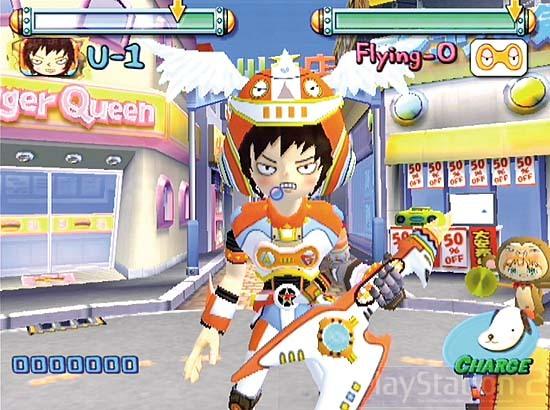 There isn't really much substance to Gitaroo Man story-wise, but there doesn't need to be. You're U-1, a young boy who never seems to have anything going his way. He's constantly bullied and put down by his arch-nemesis, Kazuya, and always manages to embarass himself in front of the girl of his dreams, Pico. When his talking dog Puma reveals to him that he's the last remaining relative of the legendary "Gitaroo Man", everything changes quickly. He's whisked off into space to save the Gitaroo Planet, which is being taken over by Gravillians, people who plan to collect all the remaining Gitaroos and use them to conquer the universe.

Multiplayer mode is made up of only a few songs, and up to 4 players can join in on the fun. It's just like playing single player, but each player's performace determines how many shots the other players need to guard against. Overall, it's a nice diversion, but you probably won't be entertained for very long.

Like iNiS's later game, Ouendan, this is where Gitaroo Man blows the competition (if there really was any to begin with) out of the water. It's a rhythm-based music game consisting of 10 levels, each with its own song. Each level has 4 basic stages; Charge, Battle, Guard, and Final. In Charge, you have to follow and hit the beats in order to fill up your life bar. In Battle, you need to be as accurate as you can, as the more beats you hit, the more damage you dish out. If you aren't careful enough, you'll end up hurting yourself. In Guard, you need to protect yourself from the enemy's Gitaroo riffs by hitting the 'X', 'O', 'Triangle', or 'Sqaure' buttons as they pass through the centre of the screen. Final basically wraps up the level, and plays exactly like the battle stage.

The game employs a unique method of following a line of beats with the left analog stick, and pushing/holding 'O' at the right time. You're required to master the controls and the system at a break-neck speed, but it's never frustrating. Like most music based games, Gitaroo Man uses a ranking system. After each stage, you're given a ranking based on how accurate you were with the beats. It's difficult to get above the B-rank, and pretty much impossible to S-rank every stage. Despite the difficulty, it's fun to try and master everything.

You can tell iNiS didn't have much of a budget, because the graphics aren't really of the highest quality. However, this game was quite early in the PS2's lifeline, so it's not right to expect much. The graphics, like the storyline, aren't really necessary to the game. Each level is preceeded and followed by a nice CG movie introducing new characters, or wrapping up the level. They're basically there just to lighten up the mood and give you a break from wildly mashing at the controller's buttons.

Each of the 10 levels has its own song, and they're all very well done. The songs don't feel extremely repetitive, no matter how many time you replay the levels. The voice acting isn't the greatest, and sometimes it's overpowered by the music or sounds going on in the background, but it can be forgiven. The game doesn't take itself seriously, so the voice overs don't need to be top-notch.

Playing through the single player mode isn't very long (under 2 hours, depending on how well you play), but it's the desire to master all the stages that will keep you coming back for more. There are 2 difficulty levels available, Normal & Hard, and there is an extra unlockable mode ('Master Mode') obtainable after finishing the game once. With an almost unlimited amount of replayability coupled with the fact that it never gets boring, Gitaroo Man will last you a long, long time.

A really great, unique game in the PS2's library that was missed by many due to its very limited print run. If you're lucky enough to find it anywhere (it received another, even more limited printing recently), and have an urge to play something fun and new, Gitaroo Man is a must buy.