Mythology at it's best... or easiest. 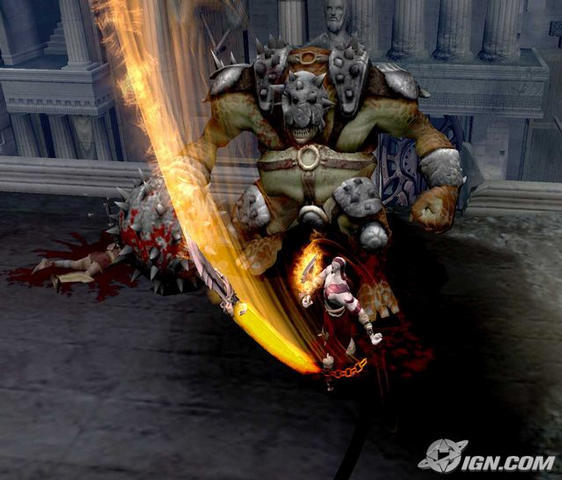 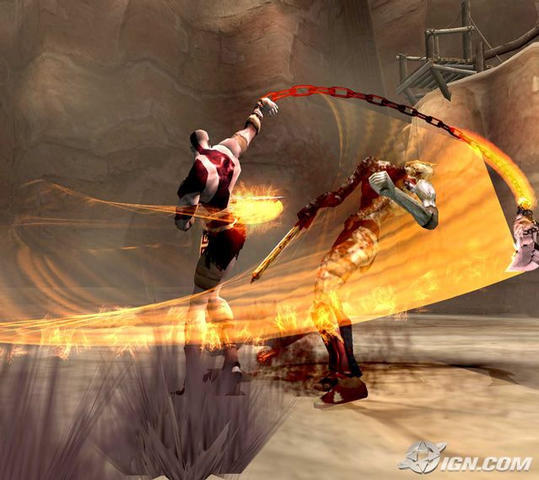 Ok this seems to be the King of all games... but is it?

Everyone has been raving about the new hack'n'slash game God of War. While rightfully so, this game is not all its cracked up to be. It looks great, plays great, and sounds great but after that it goes downhill.

You take the role of a man named Kratos, who was given power by Ares "the God of War" after selling his soul (kinda redundant huh?) and after all of your conquering has been finished you have done nothing but wander the Earth for years. After years of endless walking Kratos is summoned by the Gods of Olympus to stop Ares the son of Zeus who has gone basically drunk with power. And being filled with Ares' power himself, Kratos sees this as the perfect way to end his suffering and get revenge on Ares for the accursed life he has lived.

Ok now on to the particulars.

The game looks incredible! Excellent looking character design, as well as backgrounds, enemies, CG scenes, everything. The graphics are very smooth and very non-choppy with all the action that is constantly going on. When I first saw this game I was skeptical about the way it looked and thought the smoothness of the GFX would be in trouble when the action got kicked up as much as it does in this game. But never fear, there is a constant smoothness through all the fighting and motion and you never really get to see any choppiness, which is a good thing! With the violence in this game it is definitely not for the young or weak of heart, so old people and kids under 17 stay away!!!

Not only does it look great but the soundtrack and character voices were very well done. The music gives the game a Greek mythology feel to it (thankfully, since its a game based on Greek mythology!) the added sound effects of the enemies in each area is very well done, you can even hear the sounds of flesh ripping when you tear someone or somethings' arms off! This game doesn't have any bad sound effects in it, but sometimes if you're fighting too many things the sounds get kinda muffled since they're all going at the same time.

There isn't much to say about the gameplay other then SMOOTH AS SILK!!!!!

Ok this is where my opinion of the game gets really down to the nitty gritty, I learned how to master this game's fighting in a matter of 35 minutes! I can't believe the game can be beaten by mashing down 2 buttons!!! So it's a great pick up and go game, but not the thing you want to play if you like a challenge. I beat the game getting everything in it in a mere 12 and a half hours! There isn't much to behold once you learn how to do everything in the fighting it becomes another of your basic hack 'n' slash games that are the same thing over and over level after level.

This is the WORST feature in this game! After I beat the game I was expecting some really cool unlockables like you can get in Devil May Cry 3... not a chance! Each difficulty level you beat it on unlocks the exact same thing so if you want to beat it on easy to get the unlockable content (which I might let you know that it all unlocks after one go through!) then be my guest. The difficulty levels are not even all that different from each other. Honestly after playing Devil May Cry 3 and then playing this game I was INSULTED at the lack of difficulty this great looking game had.

The game is a great game to play if you like hookers - all it is good for is a "one night stand." I do have to say I was disappointed in the difficulty, and the repetitiveness in the fighting. It looks incredible but nothing I would waste $50 dollars on. This game should be down to about $30 bucks where it belongs by thanksgiving. And then maybe I will buy it, thank the Lord for game rentals! If you want to spend $50 dollars on a great game with replayability go BUY Devil May Cry 3 and rent God of War.
Review Page Hits: 0 today (286 total)
mediahook