Killing evil Gods is all in a day's work 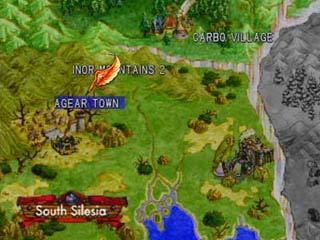 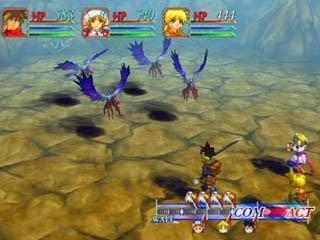 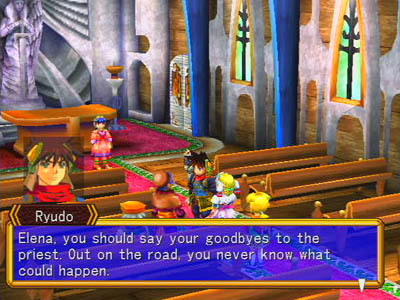 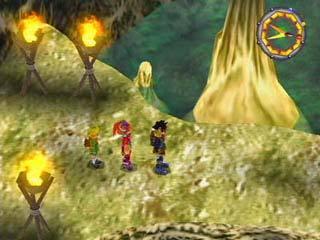 For a game originally released on the Sega Dreamcast console, in the year 2000, Grandia II is actually an impressive game. The backgrounds are bright and colorful. Fights are fast, varied, and really quite a joy. Plus it’s made by Game Arts, (original famed creators of Lunar: Silver Star Story & Eternal Blue Complete), so there is no surprise in mentioning the great humor, mainly displayed by the game’s lead role, Ryudo. One of the most truly bad ass leads of recent memory, Ryudo is silly and sinister enough to provide plenty of small laughs (a requirement for all Game Arts games). The least desirable aspect of this otherwise GRAND experience is in the premise of the story. Everyone knows the battle of light and darkness is a cliché one. Sure, Grandia II does feature a sexy, possessed Devil girl who happens to exist inside of another female character--but all the way through the ending, you’re still faced battling your way through a quest that just feels like something you’ve done a dozen times before. In all fairness, the game does a lot to break away from the norm. There is a non-human race which remains neutral to light or darkness, a huge split in the earth (kind of a visible metaphor), and a love triangle that is just as corny as it is confusing. Just do not expect anything too original in this fight to the death with the God of Darkness himself, Valmar.

Clearly the most cherished part of this game is the battle engine. Based off an Initiative Point system in which your characters’ Action ability will allow them to move faster through the dial. Once they’ve reached the command line, you then decide to have your party member use...
*Combo (2 attacks)
*Critical (1 attack, cancels enemy attack)
*Special Ability/Magic (costs SP/MP)
*Item (cure, heal, and even some offensive)
*Evade (can totally dodge enemy attacks)
*Defend (best when enemies use special skills)
*Set AI (if you needed to set down the controller for a moment)
*Escape (you wuss)

Although more complicated than your typical RPG, it is actually pretty simple when you get going. As you build more skills, and face more enemies, things get more complicated, but still remains a lot of fun and the battling is never tedious. Building up characters statistics relates a lot to the game play as well. In addition to the standard experience points, players also gain special and magic coins, which are used to gain and strengthen special moves and magic. Once you start to build up your party, that is when things get exciting. In fact, I’ll admit I had more fun just fighting enemies than I did actually advancing the story. Hell, you actually don’t have fun with the fights, the game does not actually have random encounters–so you could simply avoid several hours of meaningless fighting if you’re in a rush.

Besides a seemingly re-run of a story, my other main gripe with Grandia II is how rushed of a port they did. When navigating towns, sure they are very pretty to look at, but players will notice considerable slow down in the frames per second (or FPS for short). I have actually played through part of the original Dreamcast version of Grandia II, and I can assure you the FPS was much better on the DC. Other than in towns, the FPS is fine on the Playstation 2 part, but the towns have all the best looking backgrounds. Player models do not look nearly as good as the land they walk - incredibly bland faces mock the entire game, even for a year 2000 game. Fortunately the sound effects are pretty nice, and the music is always rocking in battle. Although the number of songs does seem a bit limited, the sweet rock n’ roll jams really helps bring out the best in the game, and fits in perfectly with the high intensity fighting.

In the end, Grandia II does not disappoint. Sure the story is a little rehashed, but there is enough comedy and drama to get players distracted. Oh, and did I mention how fun the battles can be? If you’re already of fan of Game Arts games, do yourself a favor and play this game. Even if not, it may still be worth a trade simply for the battle engine alone!
Review Page Hits: 0 today (149 total)
mediahook