This game is new breed for "PEEPING & RUN" adventures. 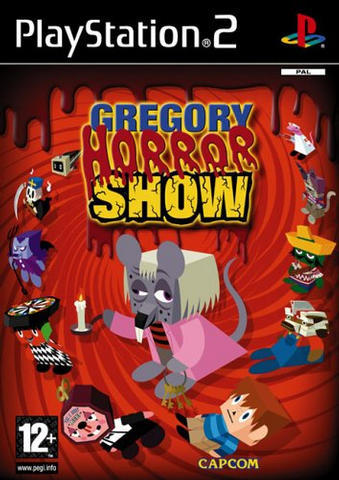 As far as I know, this game was released in Japan, Korea, and the UK, but not in the USA. Not sure about other territories.

When I heard about this game for the first time, it didn't sound good to me. A few months passed away, and I bought it accidentally, when I rummaged around some console game store. The early part of the game was too good to be missed, but by midway, it was exhausting after that. Anyway, I made it to the ending, so I'm writing this review.

The story's synopsis is simple. You, the player, enter the "Gregory Hotel", which is very weird place, and you must find your way out. How? By collecting 12 souls....souls of the various NPCs you encounter. Of course, they don't give you their souls freely, you must find the way to get them. The problem (or funny part) is this. After you steal their souls, they will try to catch you and do some "Horror Show" to you (as the name says). So you must hide, sneak, and run through the hotel to escape.

The interface is very easy and game area is not huge. You are confined to the Gregory Hotel only, even though it has multiple floors. After you get the map of each floor, you can easily see who is where. There's no fighting as in other Capcom games like Resident Evil or Devil May Cry, so you aren't involved in action as much. The game camera is good, working in almost every area, and you can do first person or third person view freely. It's very easy to move and act.

The most important and interesting act is "peeping" (sneaking and spying). You can (or must) do peeping all the way. Of course, you can talk with the NPCs, as you can in other adventure games, but this time peeping is more important. You can overhear them talking about some very important things. You might learn their activity habits through peeping, so it's an important part of the game throughout. You might get tired of peeping in the middle of game, because you must do this again and again and again.

"Limited Real Time" is another good part of this game. Time passes in this game, and every NPC does the same thing at the same time every day. If you investigate their habits, it will be written on your memo pad, so you can learn when to meet or avoid certain NPCs. Your health decreases automatically, so you must sleep or use certain items to refresh your health. You can find some item-spawning spots easily, so it's not very hard to survive.

However, the difficult part begins after the midpoint. It's not very hard to figure out how to capture a soul the first time, because you need only one action to do that. By midway, you must do two actions to do that, and sometimes there are time limits for acquiring souls. If you miss that time limit, you must spend one more day without doing anything. It can make a player exhausted, forcing him to go out to find some item meaninglessly. This is bad side of this game.

The bottom line is that the first part is amazing, the middle part is still cool, but the last part and ending doesn't keep you interested. However, the play time could be under ten hours, you don't have to fight, and it's very much like a pure adventure (I mean non-action), so it's still worth playing and peeping.

If you have a PS2, and your region released this one, I'd highly recommend you play it.
Review Page Hits: 0 today (367 total)
mediahook