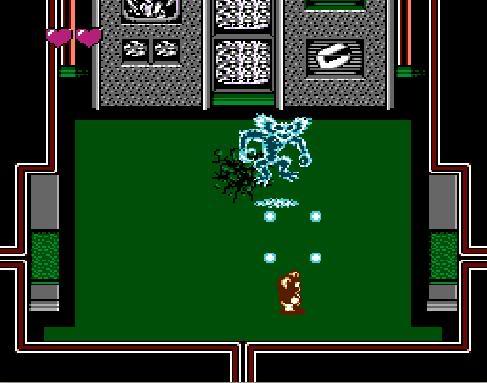 Gremlins 2: The New Batch from Sunsoft is an isometric action game based on the movie of the same name. Gameplay revolves around maneuvering Gizmo the Mogwai through the Clamp Enterprises office building as he tries to thwart the Gremlin infestation.

The first thing that impresses me about Gremlin's 2 is the great soundtrack. It's full of hard beats and up tempo notes that really push the NES hardware. It's a great pace setter for the game, and while reminiscent of Castlevania themes at times, it still manages to capture some of the silliness of the movie. The sound effects leave a little bit to desire and are the weakest part of the game. One example is the paper clip and bow weapons sound almost exactly the same, while the fireball sounds like a weak hiss.

The graphics are well imagined and animated. Gizmo looks and moves great. It can be endearing watching him waddle. The enemies are also appealing to the eye and the boss sprites are huge and intimidating. The environments are a little less impressive than the characters, but do a good job conveying the setting to the player. You're in an office building, so there are a lot of desk, columns, windows, ventilation ducts, and the awesome horror set from the weekly horror movie scene. The cutscenes do excellent representations of the actors from the film. Unfortunately, the color is a little muted, and I feel if Sunsoft had went for a brighter look, it would have really enhanced the overall visual appeal greatly.

The gameplay is tight and responsive, almost always making it a matter of player fault when Gizmo falls into a pit or is hit by a projectile. You run into a variety of gremlins with different abilities, as well as hopping mutant tomatoes, bouncing spikes, bats and spiders. There are skateboarding gremlins, leaping gremlins, walking gremlins and gremlins that turn into tornadoes. Combat is exciting as the player fires a shot and then usually has to make a quick move to avoid incoming damage from enemy contact or projectiles. Environmental hazards include pitfalls, spike floors, moving platforms, conveyor belts, arms reaching through the floors, electricity and fire. On occasion I ran into a few spots where enemy placement made some of the platforming a little cheap, but it wasn't anything a little planning and unlimited continues couldn't overcome. The boss fights are a little disappointing as they are typically very easy and brief. The machine gun gremlin is the most difficult battle as you have to avoid his gunfire and charges while leaping over spike hazards and trying to line up your shots. A key element that differentiates this game from other similar titles is the shop. Enemies drop crystal balls you can use as currency. In the shop you can spend them on health, extra lives or weapon upgrades. You can only make one purchase at a time, so there is some strategy as to what item you need most. The weapon upgrades further separates Gremlins 2 from other isometric games. You can fire multiple shots over a wide pattern, making combat much easier as well as increasing your damage.