One of the greatest adventure games of all time! 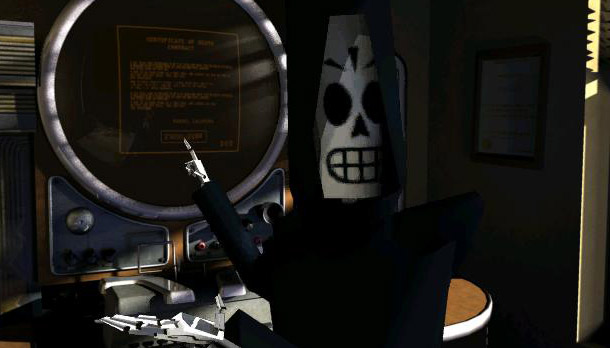 Prior to the release of Grim Fandango, Lucasarts adventure games were two-dimensional, point-and-click adventure games, focused primarily on storytelling, challenging puzzles, and hallmark soundtracks. Grim Fandango's design objective was not only to make another quality adventure game, but to revitalize the adventure game genre as a whole. This would be accomplished by creating an updated three-dimensional game engine called GrimE, which utilized 3D models and a new scripting language called Lua. Uniting elaborate 3D models, more interactive controls, and lifelike animations, it spawned a much more immersive experience.

The Grim Fandango is a pastiche of film noir, a theme which was executed upon quite well but deviated significantly from previous Lucasarts titles. The game's protagonist, Manuel Calavera, is a grim reaper-esque anti-hero working for the department of death as a travel agent to pay penance for his sins. Manny's four year journey through the land of the dead to dazzle the distressed damsel offers darker tongue-in-cheek variety of humor than most Lucasarts games. A brilliant soundtrack perfectly complements striking pre-rendered backgrounds to orchestrate a game world which is quite charming, and in some ways superior to its predecessors. The inventory, character control, and object interaction systems however, were all less intuitive, which I found to be downright frustrating at times.

Innovation is inherently risky, and in Grim Fandango's case the two most significant liabilities were implementation challenges with the new game engine, and alienating the existing adventure game fan base, the latter of which is the reason why I believe the game was not considered to be a commercial success.

Grim Fandango's greatest liabilities absolutely proved to be it's greatest assets. It is not a game that I was particularly interested in trying at first due to it's departure from the tried and true 2D point-and-click adventure game regimen. Despite its wavering commercial performance, even critics at the time of its release agreed that a comical and intriguing four year journey through the land of the dead with Manny was an ironically delightful and lifelike endeavor. I couldn't agree more and I anxiously await it's future re-release on the Playstation 4.

Residual VM allows you to play Grim Fandango on a modern PC. There is also an additional add-on recently released that allows you to play through the game using only point-and-click controls.
Review Page Hits: 0 today (323 total)
mediahook