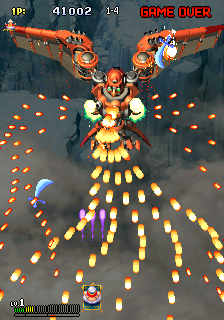 Gunbird 2 is a top down shooter from Capcom that features some interesting mechanics and a bullet hell style that rivals all but a few games in the genre..The bare bones story sees a group of loony characters seeking out three elements that are components of the Almighty Potion. The Queen Pirates are trying to find the elements also and will continually attack you throughout the game. One is immediately drawn into the quirky, over-the-top Capcom art style. During cutscenes, large, colorful, hand-drawn characters give us bits of story, exchange insults, and make threats. All of the characters in the game are vastly different from one another. You can choose from the robot Valpiro, nine-year-old witch Marion, Dracula's son Alucard, the jet pack equipped Tavia, and the flying carpet riding Hei-Cob, Two additional characters have been added to the Dreamcast port: succubus Morrigan of Darkstalkers fame and the half-blind samurai, Aine.

The shooting mechanics revolve around forcing you in close to larger enemies. While characters have powerful ranged weapons, they are also equipped with a powerful close range attack that is essential for reducing the number of bullets on screen. The catch is the range, which leaves you with very little reaction time to new shots. One effective strategy is to use the bombs, clearing the screen of bullets, and then quickly moving in and using the melee abilities to burn down enemies. Each character has unique animations for their abilities such as Morrigan's hair spikes or Aine's katana sword. Players can only store so many bombs, and melee attacks use a chunk of an energy meter to keep ability spam to a minimum. To compound this, you practically have to ignore the smaller enemies in order to effectively take out the larger ones. This is a nice change from many shooters where it is best to clear small enemies first.

There are seven levels in the game that take on a variety of well-drawn and animated environments ranging from forests to icecaps to the old west. The turrets throughout the game change according to the theme of the levels. In the old west, turrets hide under cacti, while in the snow levels they are covered in ice and rocks. Each level is also full of incredible robots and vehicles with a multitude of attacks. Submarines, hovercraft, airplanes, propeller drones, and mechs keep a constant stream of fire going at you. All of them spray fire in different patterns, but a lot of times smaller enemies intercept your own bullets intended for bigger enemies. Mini-bosses feature claw attacks, charge shots, spray fire, and targeted fire. Gargantuan bosses are made up of multiple stages and break apart as you damage them. Arms, claws, wings, and weapons can all be blown off, decreasing the threat on screen and lowering hit points alongside shots on the main body. Almost every mini-boss and boss has multiple transformations once enough damage is dealt, resulting in new patterns and changing the dynamic of each fight drastically as you frantically try to reprogram your timing and reflexes to new speeds and patterns.

The score is good overall, but can sometimes almost devolve into elevator music. The tempo stays high with a lot of deep bass percussion and when it is well done, it adds to the frenzy on screen. It sounds as if the composers were deeply inspired or very experienced with the 16-bit era of game music, which blends well with the graphic style. Some of the music reminds me heavily of tunes from the Sonic the Hedgehog games on the Sega Genesis. It's a little disappointing that we get many samples of good, quality music, only to be let down by phoned in performances. Sound effects are typical of the genre with some good explosion effects, but little else to stand out from the crowd.

The selectable difficulty ranges from a game that you can practically complete asleep to an intense, nigh impossible challenge. Limited means of deploying bombs and melee attacks require a high amount of skill and reflexes. The action becomes so thick you will lose all sight of the beautiful scenery as you zero in on your character and the incoming attacks. If you are capable of using your peripheral vision and can plot incoming trajectories, you will have an easier, but still hard journey. If you can't do either of those things, expect to become extremely frustrated. Two-player play relieves the challenge by allowing you to burn enemies down faster, but adds a little bit of visual confusion at times as you now have another sprite and double the number of shots on screen, but it is an extremely fun adventure to play with friends and family. Grab a friend, crank up the difficulty and enjoy the fast pace, variety, zaniness and intensity of Gunbird 2.