Quite possibly one of the greatest games of our time. Halo not only changed the face of the FPS genre, it also pushed the launch of Microsoft's first attempt at the console market. 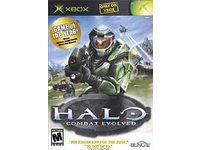 To tell you the truth, when I was waiting in line for over seven hours to get an Xbox when it was first released so long ago, I wasn't even planning on getting Halo. I had never heard of Halo and was chatting with a fellow gamer about the lack of multiplayer support in Airforce Delta Storm, when he mentioned "Well why don't you just get Halo, that's a good multiplayer game?" From then on, my life was changed. My eyes had been opened to the wondrous foreign world that Halo would provide me that would fuel my FPS rage for the next few years.

With that being said, let me proceed to introduce the game that needs no introduction. Halo has been acclaimed by more than one reputable gaming magazine to be one of the best shooters ever. Though we all know the story, I will use a few lines to explain it. You play the part of Master Chief, who wakes up from cryogenic storage to find that his starship is under attack from Covenant forces. The Covenant is a mixture of alien races that are bent on destroying mankind. As Master Chief, you are part a group of super human elite who have been trained since birth for military combat. Upon evacuation of the ship on a mysterious halo world, you proceed to kick Covenant butt as you try to find survivors and the secret of Halo.

Now with formality out of the way, I can explain to you the wonders of this game and why it is so great. To start out with, the graphics are absolutely wonderful. Normally when a system is launched you will find glitches and bugs in some of the earlier launch titles, but you find none in Halo. The plush environments almost come to life along with the spartan massive underground rooms you seem to find yourself in more than once. The sound is great, even though there is no custom soundtrack feature. You'll find that the background music fits the situation you're in, from upbeat combat to calm and cool sounds of nature.

The replay ability of this game is not much after you beat it on single player, however I gave it an "A" because of its superb multiplayer features. The game never ceases to be fun on multiplayer because you just have so many options to choose from. You can play straight out combat, capture the flag, etc. It's a wonderful experience. I only wish this could have been Xbox Live compatible, but since there was no Xbox Live when it was released, I guess I can't complain too much.

Last, but not least, the only minor complaint I had about the game was the learning curve. I gave it an "A-" because it takes you a bit to get used to the controls. I didn't give it lower because this could have been, for me at least, just because Xbox was a new console the day I played Halo for the first time and I could not have been used to the controls. Never the less, you eventually learn them by trial and error, and once you learn them, it is like riding a bike...it never goes away.

So to wrap things up, Halo is a MUST for almost everybody's collection. It is the pinnacle of the Xbox fleet and the second one is due out later this year. Plus, there was a price drop of Halo to $29.99 and also a Halo edition Xbox that came out for $169.99 which came with Halo, a nice green Xbox, and a controller w/special box. If you even wanted to get into more detail about the game, there is even a group of novels out about Halo as well as side story DVD's such as Red vs. Blue. I loved this game personally and it will always have a special place in my collection.
Review Page Hits: 0 today (473 total)
mediahook