A Heartbreaking Work of Staggering Genius is a raw memoir from an author who is sometimes too clever. 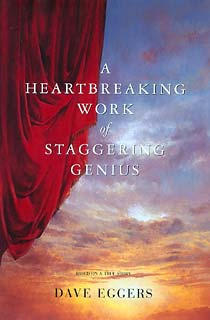 Dave Eggers is a busy fellow, with his opening of writing schools for children spanning the United States, his publishing company and online literary journal, McSweeney's, his recent work, 'The Unforbidden Is Compulsory or Optimism," which is currently being serialized on Salon.com, his advocacy for the underappreciated teacher, his newest magazine 'The Believer', and inspiring run-on sentences with his many accomplishments.

The previous run-on sentence illustrates, with emphasis, the sheer vast nature of Eggers' accomplishments, which occasionally induce vertigo in some faint-hearted individuals.

Let's break that down again in an easy-to-read, bulleted list of accomplishments:

- The publishing of A Heartbreaking Work of Staggering Genius, You Shall Know Our Velocity, How We Are Hungry, and The Best American Nonrequired Reading 2002-2004
- His recent political satire, "The Unforbidden is Compulsory or Optimism", which is currently being serialized on Salon.com
- The opening of 826 Valencia, 826LA and 826NYC; a set of schools designed for children writers in mind
- Advocacy for the underappreciated teachers around the United States, soon to be published in "Teachers Have It Easy": The Big Sacrifices and Small Salaries of America's Teachers
- His magazine, "The Believer," an irreverent look at contemporary literature

You can't help but feel inspired by Eggers' laundry list of accomplishments, especially after reading his memoir, A Heartbreaking Work of Staggering Genius, where Dave and his brother experience the death of both of their parents in the span of five months of unrelated cancers.

Dave suddenly becomes a "single mother" and is forced to raise his brother, Toph, though conflict usually arises as to how exactly he should raise his brother. As raw as stories come, it is a story of two individuals coping with death and the responsibility that comes with living on your own at a young age.

In the beginning of the memoir, Eggers constructs an elaborate preface spanning over fifty pages long, detailing the meaning of the symbolism included throughout the story, certain segments which were cut from the story, and in the very end, a picture of a stapler. This lays out the general theme of the memoir, the casual laid-backness of the author, and what is generally expected through the rest of the memoir.

The prose is excellent, offering a certain freshness one felt when reading books from Vonnegut or Tom Robbins. Though somewhat pretentious when telling his story, this is the conundrum which Eggers offers to the reader -- can confidence be endearing? Can his cleverness get the best of him?

Rest assured, though dealing with occasionally dark subject matter, A Heartbreaking Work of Staggering Genius is a refreshing read, offering a welcomed change of pace, and a fresh new voice in the literary world.

Here is a picture of a stapler:
__