House of the Dead (DVD)

HOLY CRAP! If it was possible to give this steaming pile of CRAP a rating of "Q", I would... 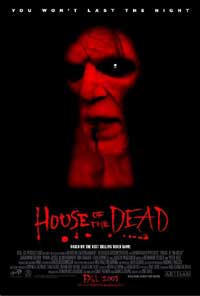 - This is the biggest pile of crap I have seen aside from Freddy Got Fingered, which was also dog crap!

Stay as far from this atrocity as possible!

The plot is about some teens going to the "biggest rave ever" (according to this movie, that means 15 people in the middle of nowhere island). Basically, what entails after an HOUR of slow, pointless, and boring dialogue about NOTHING worth while is when the movie's whole point takes place. The "House" of the Dead, which also is not a HOUSE so much as a small 3-room craptastic Castle. Top it off with about a million "zombies", which really aren't so much zombies as they are guys with bad masks and make-up that look like Wal-Mart bought Halloween costumes. Then, to combat the "zombies" a group os retarded people from all walks of life: a fisherman remnant of Papy (Popeye's dad from the Robin Williams movie), some "raver" teens, and among other stupid things an asian gymnist wearing an American Flag pattern spandex jump-suit. Give those people guns and knives, while every 10 seconds as they're blasting at zombies throw in some Matrix-style slow-mo rotating camera angles for EACH AND EVERY CHARACTER, add a splash of actual House of the Dead GAME shots flashing on the screen to accentuate the "Action", and round it all out with a rap/rock song spouting "I am Fury, bringer of the vengeance of the House of the Dead! I am Fury, bringer of the vengeance... will you hide, or will you bear witness!?" and you have the BIG fight scene of the movie.

Skip on through 15 minutes of that crap, and they make it into the castle where they meet the BIG BAD GUY (WOW!). Turns out he's not so big and/or bad as much as he's just a 14th century PIRATE who somehow found the secret to eternal life, but it caused him to become some sort of living-dead pirate. Did I mention that he found this eternal life thing out on his microscope that he had in the 14th century? Nice. Now, cut to the chase: The pirate guy spills his story to the remaining teens from the big zombie battle, and they try to stop him, blah blah blah. In turn, this all leads to the big FINALE' of a swashbuckling sword fight between a surviving teen girl who is trying to protect her only remaining guy friend from the pirate. It's fortunate that a raver-teen girl can hold her own in a sword fight with a seasoned 14th century PIRATE

All in all, this movie is a huge pile of crap. If you don't believe me, ask someone else who is unfortunate enough to have seen it, but for you own sake, I suggest you do NOT watch it with your own eyes...

You have been warned!
Review Page Hits: 0 today (458 total)
mediahook