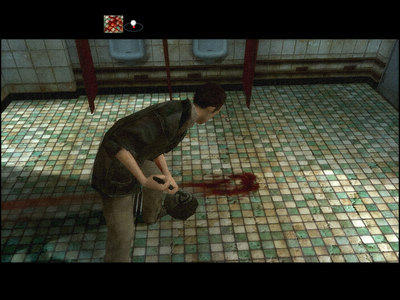 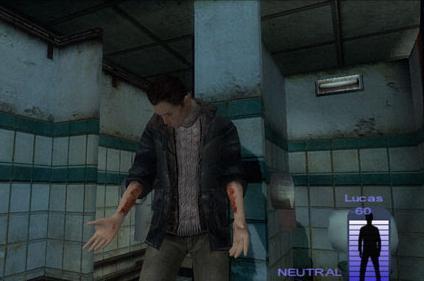 While browsing at Gamestop while on my way to work one day, my attention was caught on this game which, until that second, I had never known existed. I guess that's not much to say though, with video game magazines not yet robbing me of my money through a subscription. Sure I can probably get them free online but that'd be a wasted effort anyway. I blindly picked up the game from the shelf, brought it to the cashier, and purchased it with feelings of both apprehension and anxiousness.

What a surprise this was! Aside from the cheesy graphics that would make the PS1 proclaim a hearty "haw haw" paralleling The Simpsons' Nelson Muntz, Indigo Prophecy is absolutely spectacular. The story is original and fresh, characters are developed pretty well as the game progresses, and there's enough action to keep you on your toes as each chapter arrives.

Basically, without giving too much away, the story is played out with three different characters. First you have Lucas Kane. He witnesses a crime that the game's case describes as "unspeakable" and doesn't know what happened or why things have happened the way it did. He's got company, with two New York police officers named Carla Valenti and Tyler Miles on his tail. Carla is a knock off of Beyonce, possessing a serious and composed demeanor and Tyler is just your average goofy black man who always finds a way to piss his partner off. The action switches between these characters with each chapter. Before the chapters begin you are given the choice as to who you would like to start that part of the game with. The storyline is reminiscent of a Tarentino movie aside from the ending-to-beginning filming cliché we all love and hate him for.

All action during the game is either automated or is affected by various "Simon Says" kind of sequences. Hand-eye coordination plays a large factor in how successful you'll be over the course of the game. You must also be wary of your emotional state of mind throughout the story. You are affected by most of the variables throughout your quest. If your mental health drops too low, it's game over.

There are many choices to make with dialogue and character actions that it's no surprise with there being multiple endings to the game. Upon completion, you can revisit any chapter in the game to try your luck with a different route. The environment has many interactive elements to it so you'll be sure to find something to touch/look at/etc on another play through.

Completion for me took about ten hours. This was with thorough examination of objects around the game so it could take less time if you want to take a direct and straight-forward path to an ending.

If you do get the chance to play it, make sure to try to take a leak with Tyler while examining the first crime scene with Carla. Also, boobies are strewn in various parts of the game.
Review Page Hits: 1 today (176 total)
mediahook