What begins as an intriguing adventure ends a cliched mess. 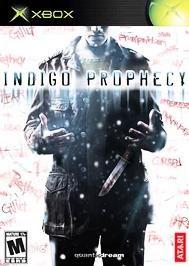 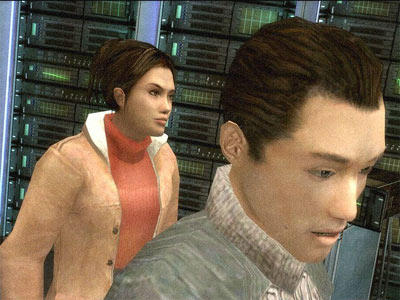 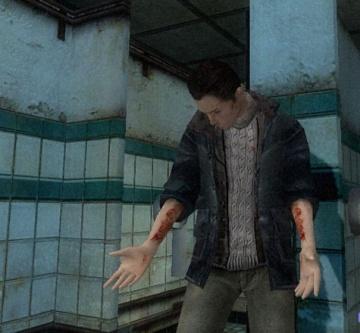 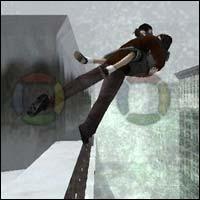 So why did it get a B-? I consider a B- to be a decent score, and there is a lot of good that this game tried to do. It offers a unique gaming experience and adds a fresh feeling to the somewhat stale point and click/adventure genre of games. The following scores are out of 10. Read on.

Story - 5.5
It really captivated me... 'til about halfway through. The game begins unfolds with a somewhat clichéd monologue by the narrator and main character Lucas Kane. Shortly thereafter, he kills a man in a public restroom. He had no idea what he was doing an he saw visions during the murder. Furthermore, he has carved some strange designs in his arm with a knife. This is where the story begins. It stays interesting until they try to make it too real. What I mean by this is there comes a point in the game where the story is tied into Mayan legend. Now, I might not be an expert in the field of Mayan mythology, but I'm thinking a lot of this was contrived for the game. I don't like it when a story (in this case, a game) tries to make something up a and tie it into an established myth, legend, fable, etc. For example, Davey Jones in Pirates of the Caribbean 2; he was not a squid-faced pirate. Why couldn't they have just given that character a different name? Anyway, before I get too off-topic, this is how the story feels. They invented an orange and a purple clan as well as an "Indigo Prophecy" which I am 99% sure has no basis in Mayan legend. I mentioned clichés earlier. Towards end of the game, everything becomes Matrix-like, with ridiculous fight scenes and crazy super powers. I found this unnecessary.

Gameplay - 7
There are some really cool things that they did here. As soon as the game starts, you'll notice that you've got to clean up the murder scene. This means mopping the floor, hiding the body, etc. The game's attention to detail can be astounding at times. Not only this, but the game features a sanity meter. After Lucas realizes that he's murdered someone, he's sanity meter plummets. As you clean up here and there, he slowly regains some sanity. Another nice feature is open-ended dialogue. In most cases, you control much the dialogue. You are left with a brief amount of time to pick where to lead the conversation sometimes leading to more information found, improved (or worsened) sanity, maybe even an extra life. Some instances will involve characters who are suspicious and will feature a suspicion meter that will increase or decrease with various conversational choices.

Also, the game is told through three characters viewpoints, and all three are playable at different points in the game. What makes things interesting is that the two other characters are detectives working to solve Lucas' case, meaning for a large part of the game, you are working against yourself.

The cons the gameplay are numerous, however. They tried to make things interactive, and they did, but there are many failures. There are action sequences (think Shenmue, but slightly different) where the player is required to input a sequence of directions with the analog sticks. Sometimes these sequences make sense, such as for boxing or dancing, but many times these sequences don't make sense, such as during conversation. Either way, these usually aren't fun. The player is also required to alternate hitting the left and right triggers repeatedly. This is clunky, tiring, and also not fun.

Graphics - 7
Decent. For an Xbox game, they are middle of the road. The characters move pretty nicely, and most of the textures are good.

Sound - 8
Pretty good. There is a nice selection of music for character themes, and orchestral score that sets the mood pretty well. Indigo Prophecy loses points here for two reasons. The music can get somewhat repetitive, especially when controlling Tyler. Don't get me wrong, I like 70's smooth R&B as much as the next guy, but there are only about three tracks that play for him, and one plays almost all the time. The other reason is that sometimes the voice-acting, while typically good, can be a bit off. Agatha is voiced poorly, as well as the Mayan oracle. There are also a few instances where, because of the open-ended dialogue, the tone of expression that characters have is not right. It's not a huge deal, though, and it rarely appears.

Replay Value - Fairly Low
Even though there are three different endings and open-ended dialogue, by the end of the game the clunky action sequences really took a toll on me. One nice feature is that you can resume gameplay at a large number of predesignated chapters. If there's a chapter or two where you wonder what would have happened if you had chosen a different dialogue, you are able to make the choice hassle-free.

Final Score - 7 (Not an average)
This game is a lot of fun to play at first, and offers some interesting additions to this genre. Its clunky action sequences can be easily overlooked. The story was the most disappointing aspect to me, but some people actually liked it. It depends on your taste. Anyone is a fan of the point-and-click genre of games may want to give it a try, if you think you can tolerate the story.
Review Page Hits: 0 today (305 total)
mediahook