Where to buy direct from label

New 7" series couldn't get off to a better start! 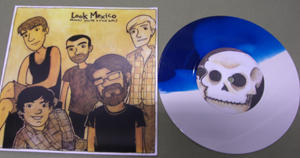 Not that I wasn't excited for this series of split 7"s which asks the bands involved to cover a song that has influenced their songwriting (and covers drawn by punk artist Mitch Clem) before I interviewed VC's head honcho Virgil for our first column, but once he spilled the beans on most of the artists involved, I was foaming at the mouth. That excitement finally received some payoff as the first split from the series, starring the indie rock sounds of Fake Problems and Look Mexico, recently showed up on my doorstep. I'll be honest and say that neither of these bands had entered my music hemisphere until today, but now that they have, I would have to be insane to let them leave.

Fake Problems cover of choice, I'm a Ramblin ' Man (taken from the extensive catalog of country legend Waylon Jennings), is about as perfect a way to start off not only this 7", but this series. The song starts off with a twang-filled jolt before Chris Farren's infectious voice tied me up with its jovial tones, transforming a rather somber song into something you couldn't sing without a crap-eating grin plastered all over your face. Just as I was letting the song fully grasp me, the chorus chimes jumps into mix with a slam-dancing drum beat, wonderfully sped up guitars and echoed vocals that completely remove any negative connotation one could have had towards a "ramblin ' man."

Look Mexico decided to take on the smooth, oh so smooth Looking Glass classic, Brandy (You're a Fine Girl), a choice that a certain deceased harpoon-wielding music industry mogul would have both applauded and despised. But enough about references to deceased Internet shows - Look Mexico's take on this song is both fresh yet safe, compelling yet familiar, and those musical choices couldn't be anymore welcome. With each listen, it feels as if they have taken this song underneath their wing as if they would an antique yacht, jagged and rough from harsh year after harsh year of neglect, and not only restored it to its original glory, but have added a modern sheen, thanks to their magnificent, varied and deeply layered arrangement, that would bring a tear to the eye of even the sternest of yacht rockers.

Hype has been blowing around this series like an ocean breeze, and with so much of it around, it is hard to not create expectations that are impossible to meet. But now that I've caught this breeze in my sails and let it sail me to its musical island, I'm not only happy with the trip but utterly enamored with the destination.
Review Page Hits: 0 today (240 total)
mediahook