You ARE Jet Li in this action packed martial arts game. 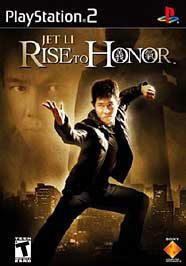 Finally a game that tries to evolve the Streets Of Rage type street fighting genre, and somewhat succeeds. In a joint venture with Sony Computer Entertainment © and Jet Li, comes a new take on the "one man against a whole army" type game. What we end up getting is just that, a new take on it. Complete with some nice new innovations and some unfortunately not so good ones.

You start off watching some events of the story unfold and play what I like to call the "Teach me how to play this game" level. Basically you can't really do much wrong in this level as the game is teaching you the moves you can do and it's basically a simply level. However, pulling off some moves might not be as fluid as you might think or want them to be. However it's a good introduction to give you an idea of how things work and you start to realize just how complex this "unique" control system could be. As well as how hard it could be to be accurate. After this level the game really begins.

The Game is similar to many other "beat em up" games. But the unique control system offers a fresh new take on it, allowing you to perform a multitude of different moves depending on how you tap the right analog stick. Yes... I said the right analog stick. See, in this game you do not press any of the Face buttons (X, Circle, Triangle, Square) but rather the right analog stick in the direction you want to attack. The result is a slap, punch, or kick, in that direction. This is very innovative and I congratulate the developers for taking a new approach like this. However, that's where the problem lies within the game to. Although innovative it can also be cumbersome. Since you have to time the taps and such with such precision and there are so many moves that can happen a lot of the time you end up with Jet Li wildly kicking or slapping around. Although this is still alright gameplay-wise as as long as you pressed in the right direction you'll most likely still hit your enemy, it would have been nice to have more direct control over the moves. If I want to kick I want to kick. Not just slap a stick around and HOPE Jet Li kicks instead of punches. In this case it seems more random then precise. A simple solution to this could have been merely make you hold down one of the L Buttons along with the tapping of the analog to perform a kick, and just the analog to perform a punch. Simply holding down a button to change between kicks and punches would have been a good idea in my opinion. Oh well... perhaps in the sequel.

The game also has some issues with difficulty. It starts off pretty easy but at some points seems to up the difficulty level pretty high, forcing you to often have to redo a part of the stage from the last save or checkpoint. It's frustrating enough when it's Jet Li versus 5 guys and they surround you and take jabs at you almost locking you in a "getting hit back and forth and unable to get out of it" kind of way, but even more so when those said guys have sticks or something and are able to keep hitting you, sometimes even preventing you from being able to get up and stand up without being knocked right back down. The Game also has some issues with the Camera in certain event scenes but this is most likely done on on purpose.

There is some gunplay in the game and the what now seems standard "Bullet Time" which is all cool and such. But honestly... you're Jet Li... Do you want this game so you can go around shooting the bad guys? Or kicking the crap out of them all Kung Fu style? Yeah, I thought so. So although there is gunplay in this game I wont really go into much detail about it because it's more of an afterthought gameplay wise.

Overall though this game is a fresh new take on a genre that hasn't seen to much new innovation. Being Jet Li and being able to lay the kick to the head or run and flip off walls to land behind your opponent to kick them in the back, or to leap of the wall and kick them in the face is great! The game overall is well done with its occasional frustrating moment. I recommend this game if you like this type of game, or want to try something innovative. And obviously if your a Jet Li Fan.