KoF on the NGPC is A-OK. 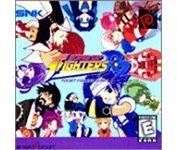 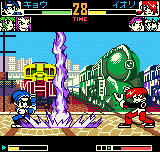 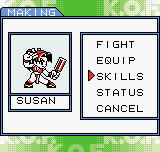 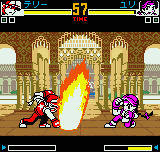 King of Fighter (KoF) R2 is the sequel to KoF: R1 on the original Neo Geo Pocket. This iteration is basically a portable version of KoF '98.


Gameplay & Control
Starting with control, it is very intuitive with the analog stick acting as a great, tiny arcade stick. You use A to punch and B to kick, pressing both to unleash more powerful moves when your power meter maxes out. From main menu, after Set Up, are records which keep track of all the matches you've played and how many you've won/loss.

Choosing Start sends you to the game mode Main menu. There are five modes available in R2. K.O.F. is story mode and has you playing through the King of Fighters Tournament. Making is where you can edit your custom player with items that increase abilities and skills, and see the status of your character. Sparring is your typical practice mode where you can refine your skills. Vs mode lets you connect two NGPCs together and battle against a friend via the link cable. And finally DC Mode, which is where you use the NGPC-to-DC link cable. With that you can exchange information and even characters with King of Fighters: Dream Match '99 on the Dreamcast.


Graphics & Sound
The graphics are some of the best for a first generation NGPC game. The animations are slick in combat and the backgrounds are nicely colored and detail. My only complaint, that I have with all NGPC fighters, is that once again all the characters are only restricted to one color. The sound does a commendable job of emulating the music and sound effects of its Dreamcast brother.


Replay Value
This game is fun to play and that in and of itself will have you coming back again and again. But what will really have you coming back is the custom character option. Building up your character to be the best he/she can be and then battling a friend; there's nothing like it. The options are great when creating a character and his/her attributes so it will keep you playing this game for a long time.


Though not as comprehensible as SNK vs Capcom, this is the other top game for the NGPC. There are plenty of options and fun, and this game is a great addition to any NGPC owners' library.
Review Page Hits: 0 today (542 total)
mediahook