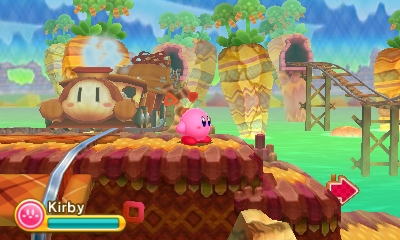 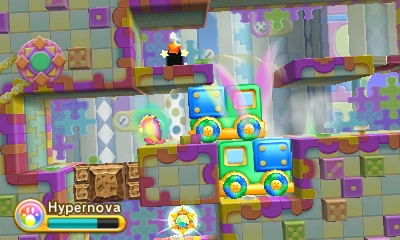 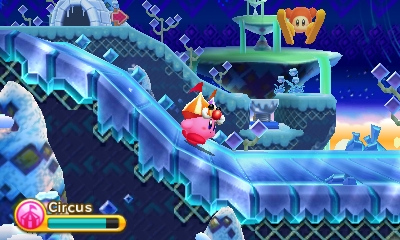 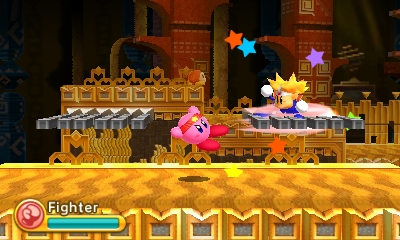 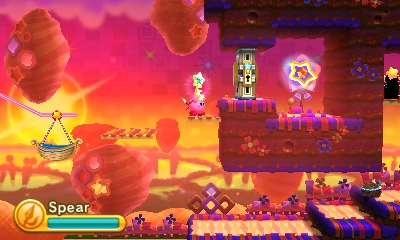 Other than Mario, Kirby is one of Nintendo's most versatile mascots. Whether he's using himself as a golf ball, entering pinball machines, or being a part of inventive games like Canvas Curse, Mass Attack, or Tilt 'N' Tumble, Kirby isn't shy to push himself to do extraordinary things. Kirby's newest title, and debut on the Nintendo 3DS, is Kirby: Triple Deluxe, and it's a much more traditional Kirby title a la Super Star. It's a game that very much feels like a return to the Wii's Return to Dream Land, save for the lack of multiplayer and Sphere Doomer areas. What it all adds up to is a platforming adventure that not only Kirby fans will love, but any supporter of 2D platformers.

Kirby's minding his own business when suddenly a beanstalk takes him for a ride into the sky. A shady figure quickly king-naps King Dedede, and Kirby quickly pursues to once again save the day. Little does he know that his quest will not only save Dedede but save a kingdom from a sinister evil as well. While Dream Land is not the setting for this 2D Kirby, a great many familiar level tropes and ideas permeate through Triple Deluxe, such as requiring the first boss of the game to be none other than a variant of Whispy Woods.

Kirby: Triple Deluxe plays out like an ordinary 2D Kirby. You move across numerous levels, sucking up foes with Kirby's vacuum-like mouth, using Kirby's copy ability to take the powers of certain enemies, all the while performing feats of platforming peril and prowess, as well as solving quick puzzles.

As the subtitle would suggest (after all, it is Triple Deluxe, aka 3D), the game's levels make fantastic use of the Nintendo 3DS' stereoscopic 3D hardware. While it's by no means mandatory to have on, it greatly enhances the experience. Various levels will have Kirby transporting from the foreground to the background, somewhat similar to the Virtual Boy's Wario Land, for the select number that have played that game. There's also plenty of obstacles and hazards that make use of this 3D concept, such as enemies that come from the background to the foreground, whether they be flying foes or Waddle Dees that swing back and forth, showcasing the depth of levels. Then there are hazards like hands, trains, and giant wooden balls that shoot out from the background and enter Kirby's dimensional plane.

One of the newest gameplay elements introduced in Triple Deluxe is Hypernova mode. When Kirby eats a specific fruit from a tree, his complexion brightens with a rainbow glow and his ability to suck things up, whether they be objects, items, or enemies, increases exponentially. This leads to some of the puzzle elements of the game, including using Kirby's now-godly inhaling abilities to move gigantic blocks around to reach new areas and collect hidden goodies.

Aside from Hypernova, Kirby: Triple Deluxe also contains some gyroscope-intensive parts to it. These are generally located in the many side areas of the game's levels, but they generally control well. You can tilt the 3DS while Kirby wades in a jar of water in order to influence the direction the water inside spills, tilt the system to aim a missile, or tilt to move a hanging weight over to its desired position.

These areas of the game usually contain the game's most important hidden trinkets, Sun Stones. These appear in every non-boss level, and are required to progress through the game. While nowhere near having to find all of them is required to access the boss of each of Triple Deluxe's six islands, a fair amount is needed to move on. Unless you're just trying to breeze through every level as fast as you possibly can, it's really difficult to not have enough Sun Stones to progress through the game without being forced to return to levels.

Along with Sun Stones, there are numerous keychains to acquire. Unlike said Sun Stones, these keychains are purely optional, coming in two varieties, a small silver collectible that is very common and a larger rainbow collectible that only appears once in nearly every level. Collecting these unlock character sprites from a number of past Kirby titles. It's really a celebration of Kirby's remarkable and illustrious past.

Outside of the story mode, which sadly doesn't last all that long, Kirby: Triple Deluxe features two distinct modes, a Super Smash Bros.-like fighting game in Kirby Fighters and a rhythm action game called Dedede's Drum Dash. The former features all of the abilities in the game, and you choose from one of them and fight through various stages against AI opponents. There's multiplayer included, but this is limited to local play, unfortunately. Another bummer is that every fighter is simply a differently colored Kirby. It would have been nice to see the actual enemies that each Kirby's abilities are based off of. For instance, Cutter Kirby could have easily been replaced with Sir Kibble, an enemy who Kirby uses his copy ability to gain Cutter in the first place.

Kirby: Triple Deluxe runs well on the Nintendo 3DS hardware. The visuals appropriately colorful as well as rather whimsical, too. The music is cheery and mostly original, although there are pieces taken directly from Kirby's Return to Dream Land. Can't really complain about that, as that Wii game's music was exceptional and darned catchy, much like the new musical content in Triple Deluxe.

If you're looking for an abundance of prevalent innovations in this Kirby game like you saw with Canvas Curse or Mass Attack, you are going to sorely disappointed. Kirby: Triple Deluxe stays close to the formula of games like Kirby's Adventure, Dream Land, and their subsequent sequels without straying too far outside the gameplay of those titles. What it's lacking in amazing originality, Kirby: Triple Deluxe makes up for this with its clever level design, 3D implementation, colorful and crisp graphics, engaging and novice-friendly gameplay, and varied amount of modes. Kirby: Triple Deluxe won't "blow" you away, but it certainly doesn't "suck" at all. It's a fun game, and that's really all you want in a Kirby title.
Review Page Hits: 1 today (187 total)
mediahook