Flawed, but definitely worth playing. 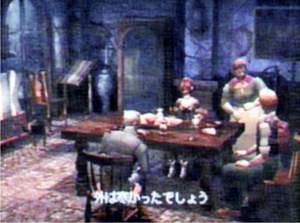 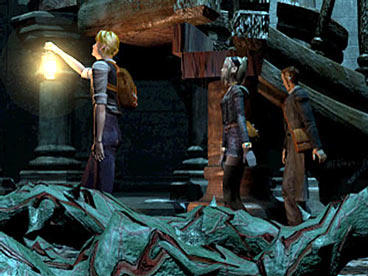 Let me start by saying I had a lot of fun playing this game. It's not overly difficult, but it does have the extremely difficult secret boss battle which I was unable to beat. Let me tell you, the FAQs on GameFAQs lie! One FAQ stated that this boss had about 100,000-120,000 life. I did at least 200,000 damage to the boss but he wouldn't die. Anyways...

Graphics: 7
For the Playstation, these graphics are alright. It's not Chrono Cross, but they are good. The major downer in the graphics is the solid black background when battling. On the other hand, Koudelka sports some pretty impressive FMV sequences.

Story: 8
The story in Koudelka can be summed up as follows: A girl named koudleka hears a voice that calls her to an abandoned (and extremely gothic) monastery. A strange looking vampire attacks her upon entry, she kills the vampire with the help of a newly acquired friend, Edward. After that, they wander around and meet a depressed priest, James. The trio then fights hordes of evil things and discovers why all the monsters are there, and what the previous owner planned on doing. Okay, now you're thinking ''Why'd you give the story an 8?'' Let me answer that by saying that the story is actually quite deep but I don't want to spoil it. Also, each character is not what he/she seems. Each of the three characters is well developed over the course of the game including, heaven forbid, the main character. How many times have you played a game like Suikoden where the main character never says a word other than yes or no? This, my friends, is not Suikoden.

Sound: 8
I'll be honest, the only songs I remember from this game are the battle music and the boss music. Those songs, though, are very different than the average RPG song. I personally liked the battle music, but not everyone might. The voice acting in this game is generally top notch. Almost all the dialogue is presented through speech and this adds to the game's overall feel.

Gameplay: 7
The worst thing about the gameplay is the occasionally hard to find item because it doesn't ''stick out'' enough. Also there is one part in the game when you change from one of the discs to the next that if you haven't found a journal or something, you cannot proceed. If you do this you have to load your last save unless you did what I did... save over my save file as soon as I get to the new room! Changing topics, the battle system is kinda cool. It's reminiscent to me of the Shining Force games (except with three people instead of 12). Battle occurs on a board not too different from a chess board. Your characters are on one side, the enemy on the other. Turns are gotten similar to Final Fantasy Tactics or Final Fantasy X, In which the fastest people get turns more frequently than the slower people. There are numerous weapon classes and spells, each with three levels. With weapons, each level adds another hit in a combo and makes them slightly more powerful I think. Spells, when leveled up, become more powerful, quicker to cast, and generally consume less mp (if I remember correctly). The only complaint I have is that most weapons break eventually, so having some weapons have the same type in reserve is not a bad idea.

Overall: 7
A pretty solid game overall. If you like gothic things (like the real, Mary Shelly's Frankenstein? or you just want to take a break from Squaresoft, give Koudelka a shot.
Review Page Hits: 1 today (707 total)
mediahook