It doesn't have a lot to offer, but Left 4 Dead is a thrilling shooter, particularly with friends. 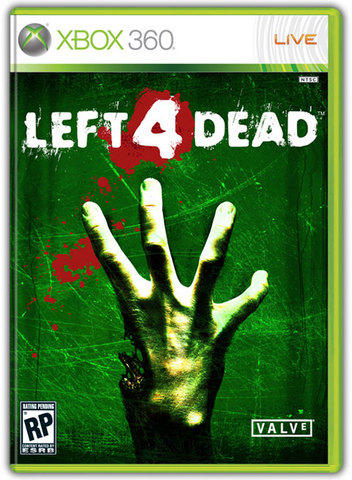 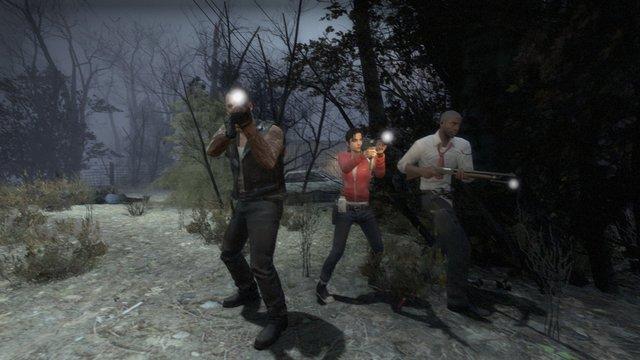 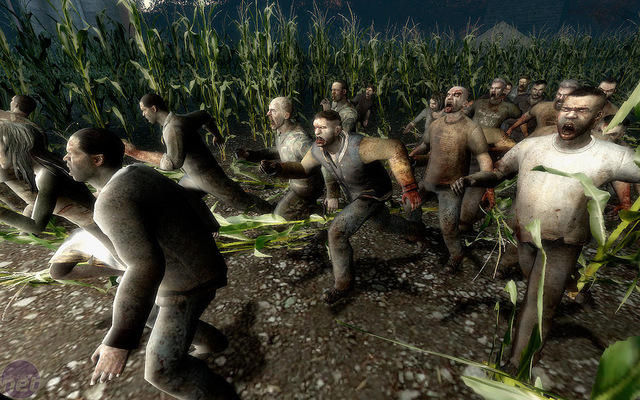 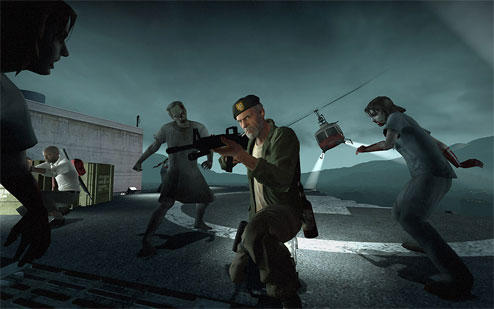 In Left 4 Dead, you shoot zombies, and if you love doing that, then this game will not disappoint. The game's objective is simple - get from one safe house to another - but the legion of undead that lie between you and your goal presents a hefty challenge for you and your three allies. You do little else in this game and unfortunately, the cooperative gameplay that this title potentially offers never fully materializes, leaving you with a rather simple shooter that can quickly become stale. Still, Left 4 Dead is an intense, enjoyable offering while it lasts.

There isn't much story to follow here, but that's not a complaint, just an observation. Narrative isn't important in a game like this, and Valve chose not to let it get in the way of the action. The game is divided into four different parts, all of which are unlocked from the beginning. The locales are various: hospitals, subways, cornfields, and even churches are infested with undead. Most of those zombies are run of the mill - groaning and mindless, but quick and tough to take out - but special, boss-type zombies with unique abilities add an appreciated variety to the action. These zombies are particularly good at sending a mob your way or separating you from your teammates.

Getting separated from your party is particularly bad, as the horde of zombies that come your way are not designed for one person to take on. Valve provides adequate AI teammates for when you go it alone, but getting online with three friends is the best way to play. Zombies are plentiful and relentless; they come at you from all angles, breaking down barriers and circumventing obstacles to get to you and your friends. Often times, it seems like too much, but that's where the fun is. No other game replicates the overwhelming sense of desperation, hopelessness, and anarchy found in zombie films quite like Left 4 Dead.

Another big reason why is the game's presentation. Though Left 4 Dead doesn't sport the visual prowess of the likes of Gears of War, the overall design is clean and crisp, with simple designs, models, and details. It's more akin to a B-film than an over-produced Hollywood blockbuster, and there's a certain charm in that. Instead of pouring on the gore and gruesome beasts, Valve chose a more minimalistic approach in creating a horrific atmosphere. The lighting is especially nice: neon bulbs flicker in rooms, flashing hidden dangers and heightening the sense of dilapidation wrought in the disorder of overturned furniture, busted walls, and scattered garbage. Other times, street lights illuminate entire crossroads, but keep the deepest, darkest corners of alleyways a secret; you never quite know where the deluge of zombies will pour from as you enter a new area, but you know they are there - not just because this is a game filled with zombies, but because you can often hear them waiting for you.

The zombies growl and moan as you would expect - one specific boss zombie cries and wails, like a lost little girl in the dark - and while it's not an astounding measure on its own, these sounds along with the blasting of the guns and shouts of the survivors make for an explosive game. Like other aspects of Left 4 Dead, the audio is chaotic because, despite a surprising lack of music, there's so much going on. Along with the zombies and gunfire, the playable characters add to the auditory menagerie, each with a unique voice and a believable sense of panic and urgency in their deliveries. Sound is also used as a way to trigger some zombie attacks, as explosions, gunfire, and car alarms will alert otherwise unaware zombies in the area. It's a nice trick: you might want to spray and pray every chance you get, but that might end up doing more harm than good. The weapons at your disposal aren't anything special - a collection of uzis, handguns, shotguns, rifles, and a few explosives, all easy to aim and fire - but in a game where you're supposed to feel underpowered, anything more than that would probably make the game less effective. Amongst other things, it makes you that much more reliant on your teammates, which is sort of the point.

But "reliant" might be too strong of a word: all the game asks of you is that you and your squad stick together. There is a lost opportunity for a richer experience here; as it is, the game is all running and shooting and there really isn't much strategy needed. Of course, Left 4 Dead doesn't set out to be a strategic, squad-based shooter, and people shouldn't expect anything like that going in. But the campaign and the gameplay in general is too thin to hold up to multiple playthroughs - shooting kamikaze zombies as they run toward you without any depth or variety in the action gets stale pretty quickly. The versus mode (in which opposing players control boss zombies) doesn't suffer from this as greatly, so if you can get online, the game's replayability gets a much needed boost.

Perhaps this is where allies are most useful. While the AI certainly doesn't hinder your progress, Left 4 Dead is much more thrilling and fun when playing with friends. Valve has crafted a surprisingly tense atmosphere for an action game, and it's a lot of fun and a worthwhile experience. But in the end, all this gives way to gameplay that gets old too quickly. Play it, but unless you love shooting zombies, don't expect it to keep you entertained for very long.
Review Page Hits: 0 today (79 total)
mediahook