One of the landmark titles in video game history 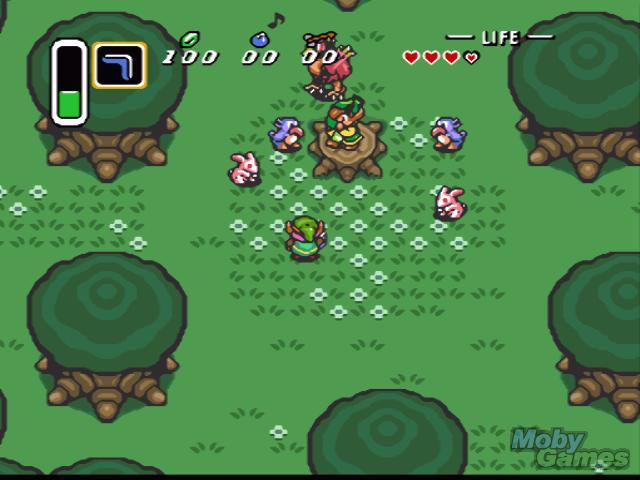 The Legend of Zelda made a big impact on the adventure genre when it was originally released on the NES in 1987, but the series truly defined exploration and action when A Link to the Past was released on the SNES in 1991. The rich world found in the game was filled with memorable characters, dungeons, and secrets.

From the opening moments when Link awakens to a telepathic message from Princess Zelda, all the way through her rescue in the dungeon of Hyrule Castle, you know that you've picked up a special game. As the world unfolds and you begin to discover its secrets, the gameplay possibilities become evident and are something to look forward to throughout the entire experience. Hearing whispers of a magical weapon that can defeat the evil wizard, Agahnim, you set out on a journey to acquire the Master Sword and save Hyrule.

Combat is simple and effective. Link swings his sword in a horizontal arc in front of his body. Approaching enemies at angles is effective in getting around their defense and avoiding damage to yourself. You can also charge the sword and unleash a powerful spin attack. With the Pegasus shoes equipped, Line can charge through enemies, either knocking them aside or outright destroying them. Once you have found the Master Sword, Link can hurl a powerful magic projectile with each swing as long as he has full health.

The items in A Link to the Past rival anything in a game that has come since. Link can speed run with the Pegasus Boots, grapple across chasms with the Hookshot, and pepper enemies with deadly arrows using the Bow. Bombs open secret rooms and can be devastating to enemies and bosses. You can even turn invisible using the Magic Cape, adding a subtle stealth element to the gameplay. With a little extra work and exploration some items can also be upgraded, rewarding players for turning the vast world of Hyrule inside out in search of everything the game has to offer.

The dungeons offer a variety of locales and interesting bosses. The strength of the boss battles is each one needs not only good reflexes, but entirely different strategies. One set of three boss enemies requires you to attack them as they leap from underneath the sand, each one shooting four projectiles in multiple directions. Another boss rushes around a platform, trying to knock you into a pit as you try to swipe at its tail. Bosses may also only be vulnerable to certain weapons, such as bombs or arrows. The designs are well done and some of them offer huge, detailed sprites.

The sound and music in A Link to the Past create an atmosphere that is easy to immerse yourself in. The score is one of the most impressive pieces not only on the SNES, but in video game history. It's sweeping and effective, and evokes a range of emotions including sorrow, anger, and fear, while also managing to be uplifting and exciting as well. When enemies are vanquished, they seem to vaporize with a loud and intense whooshing sound that only adds to the satisfaction. As the Master Sword cuts through the air and lands a blow, it sounds like it has weight and delivers an effective sounding impact. Swords make a wonderful, piercing, high-pitched clang as they strike against other blades, armor, and shields. An arrow striking a wooden post almost makes you feel the depth it penetrates to, as the hollow-sounding thud rings out, followed by quick, sharp note.

Once you open up the Dark World, you discover an oppressive, morose doppelganger of the Light World. The inhabitants are mutated animals, and the amber tones in the artwork convey a sense of dread, loss, and perhaps a little weakness. The game only gets better as you traverse this haunted land, and you will need to switch from Light to Dark in order to solve some of the series' best puzzles. You will fight enemies more fearsome than you could imagine, but with courage, perseverance, and ability, you will save the day. Enjoy the experience, because this is one of the best games ever made. Oh, and one last piece of advice: beware the chickens.
Review Page Hits: 1 today (739 total)
mediahook