Based on the awesome movie, it was delivered amazingly well to the Genesis in the 90's. 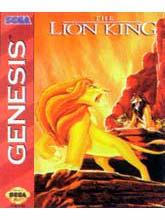 Lion King is one of those classics that millions of kids and adults loved and still love. The game is no exception.
This is one of the first games that I ever played on the Genesis, and I wouldn't have it any other way.

The game follows the movie, with each level being based on part of the movie. You play as Simba in the game, and watch and play as he grows from a cub to a full-grown lion. The game hits all the major points of the movie, and for a Genesis game, captures the movie's look, feel, and did a great job with the gameplay. I know most of you know how the movie goes and ends, and if you play this game, I think that you would really like the ending, even though its not much compared to the games nowadays.

You go from fighting hyenas and leaping over porcupines, to riding hippos to getting thrown around by tree-dwelling monkeys, all in the same game. You have a "roar" attack, which as a young Simba, doesn't do much to enemies, and it takes longer for young Simba to regain his voice. But as you mature into a full-grown Simba, you get the full-strength roar, and it scares and intimidates smaller enemies and makes them back off. This feature is used more in the beginning part of the game, than in the latter part. You also have the basic jump and the attack moves, in this case scratching or clawing.

The sound is pretty much on par with other Genesis games, while the graphics and gameplay are both above the majority of Genesis games. The gameplay is easy to handle and get the hang of. The graphics mimics the movie's style and puts it onto the Genesis in a well-done matter. It's a blast to replay and try to beat it in certain ways, like under a certain number of lives or something along those lines.

For the low price is it now (less than 5 bucks at most places, and cheaper at garage sales), it's a great deal to add to your collection if you are a fan of Lion King.
Review Page Hits: 0 today (801 total)
mediahook