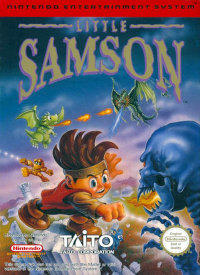 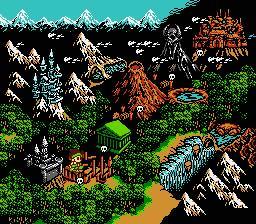 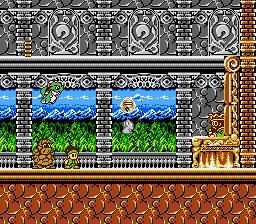 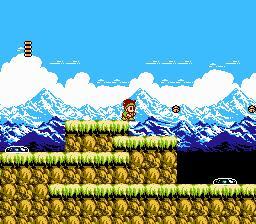 Little Samson was released in North America for the Nintendo about two years after the release of Super Mario Bros. 3 for the same system, and about a year after the North American release of the Super Nintendo. Therefore, not many gamers own, have played, or have heard about Little Samson. Considering the age of the game and the limitation of an 8-bit system, you must compare this game to other carts for the Nintendo and rate it accordingly. With that being said, if you do not appreciate classic games, do not bother picking up this game. Instead, spend the hundreds of dollars that a complete copy of this game will cost you on a Next-Gen system. However, if you are a collector or classic game enthusiast, please read on.

The story of the game is simple enough and is printed on the back of the box. "The Imperial Forgy has been invaded by Ta-Keed the Prince of Darkness! Only the owners of the Magic Bells can stop his forces from destroying the realm. Led by the mountaineering youth, Samson, a force of unlikely heroes sets out to banish evil forever! Become a fire-breathing dragon, a living statue of solid stone or a nimble crafty mouse! Soar the skies and belch fire balls as Kikira the Dragon Lord! Crush enemy troops with fists of granite as Gamm the Rock Lord. Scurry past dangerous monsters while setting time bombs as K.O. the mouse. These creatures join Little Samson to form a unique and powerful alliance as the last hope for the Imperial Forgy!"

You start the game with the ability to choose from four different characters. The human of the game is a little green guy named Lickle. He can climb walls, kick off of them, hang from the ceiling, duck, obtain the 2nd most HP out of the four characters (each character can only obtain a set amount of HP after finding Power-ups throughout the levels), and attack by using his bell that sends waves out to either the left or right depending upon the direction he is looking. The second character is a green baby dragon named Kikira. He attacks with fire balls that curve up when uncharged and, when charged, become large flaming balls of death. Also, he can duck, jump, hover for a short period of time, obtain the 3rd most HP out of the four characters, and not slip on ice. The third character is a mouse named K.O. He attacks using small bombs that explode after a few seconds. These are the most powerful weapons in the game, but are difficult to time. He is very fast, jumps high, can cling to walls and ceilings. Also, due to his size he can go into small caves and avoid some enemy fire, however, he has the lowest amount of health out of the four characters. The fourth character is a rock Golem named Gamm. He is slow, can not jump high, can not duck, and he attacks by stretching out his arm. However, he has the highest HP in the game and he is not damaged by walking on spikes.

Once you have beaten each of the four characters mini-levels you set out on a very linear side scrolling game that is very similar to the game play of Mega Man. After each level, you fight a mini-boss. Usually, it is a wizard that has two forms and each of them must be defeated to advance. In between each level, you view a map of the realm. However, you are not allowed to choose where you go on the map.

Overall Impressions:
The graphics are great. Each of the four characters are unique and can be clearly identified. The backgrounds are different and very detailed.

Overall, the sound is not that impressive. The sound effects are adequate, but nothing to get excited about. The music is what hurts this game the most. You will not find the memorable soundtracks that are found in games like Super Mario Bros. or the Legend of Zelda.

The Gameplay is fun. The best aspect of the game is that you can choose from four characters. The controls for each character will take some time to get accustomed to, but they are not that difficult to master.

Replay value is low. Once you have beaten the game on Easy and Normal, there is not much else to do except go back and try beating levels with different characters. For example, try beating the game only using Gamm. Just a note, you must play the game on Normal to see the final boss. You have the ability to use a password to save your progress. However, I was able to beat the game in less than an hour, so I did not bother writing the passwords down.

Even though I enjoyed playing this game, I would only recommend that hardcore collectors purchase it due to its rarity and cost. However, it is much better than most games in its price and rarity range/category.
Review Page Hits: 0 today (724 total)
mediahook