So Long, Astoria (Ataris, The) 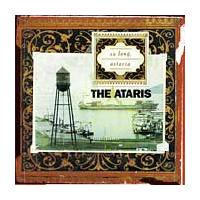 The Ataris aren't ones to disappoint. There is just something about this band that everytime you listen, you feel refreshed. They sound so full and powerful, such a real band. Along with Less Than Jake, The Ataris have an uncanny ability to make every album they release worthwhile, and have achieved massive success selling over 100,000 records on independent labels. First came 'Anywhere But Here...', an immature pop-punk album that hinted at what Kris Roe and company were capable of. Next came 'Look Forward to Failure', an EP released on Fat Wreck Chords. This record was an enormous leap from their previous full length, this time with a brand new lineup. Roe's songwriting improved tremendously and contained the bands first true hit, "San Dimas High School Football Rules".

'Blue Skies, Broken Hearts, Next 12 Exits..." followed a year later in 1999, returning on Kung Fu Records. This was the record that set the band apart proving them to be one of the best bands in this sector of music. Produced by the infamous Joey Cape, Blue Skies went on to influence a barrage of emotional pop-punk bands. After a split release with friends (and label mates) Useless I.D., The Ataris released their third full-length 'End is Forever'. Once again, a complete style change for the band, but yet again, another great album. Border lining on emo, 'End is Forever' showcased Kris Roe's amazing songwriting talents with heart-tugging lyrics and sobbing melodies. 'So Long, Astoria' is the bands fourth full-length album, and first for newfound major label home of Columbia Records. It mixes the straightforward attack of Blue Skies-style music, with the heartfelt emotional lyrics of 'End is Forever', and in the process doesn't disappoint at all.

Kris Roe said that the band took a back-to-the-basic songwriting approach for this album, and it shows, with straight up radio hits such as the first single "In This Diary", which bears more than a similarity to recent Jimmy Eat World releases. The lyrics as in all the tracks on the record are very personal and heartfelt, full of very deep meanings and messages. Kris Roe's goal was to write lyrics that a listener can't take at face value, and he achieves, which will please many fans. An example would be the title track, which shows how a persons memories resemble a buried treasure: "Life is only as good as the memories we make/and I'm taking back what belongs to me/Polaroids of classrooms unattended/These relics of remembrance are just like shipwrecks/only they're gone faster than the smell after it rains..../And when this hourglass has filtered out its final grain of sand/I'll raise my glass to the memories we had/This is my wish and I'm taking it back, I'm taking 'em all back."

Things get even more personal on the hit "The Saddest Song", a song about his daughter. It deals with why he can't spend much time with her because of his work. In "Unopened Letter to the World", Roe exposes empathy to great poet Emily Dickinson, yet his most emotionally powerful songs on the record is another hit called "My Reply". It's a song for a young girl with a life-threatening illness that wrote the band a fan letter. Part of the actual letter can be seen a read in the disc's booklet. Kris said in an interview that he knows what its like to be the kids who's left out and doesn't have many friends in that lonely town, so he wants to be a positive influence on kids, something that shines through in the song.

Other hits include the second single "Takeoffs and Landings" (listen for the cell phone) and the love-filled pop-punk anthem "Looking Back on Today". "Radio #2" features mxpx's Mike Herrera on back up vocals and if anything brings the album down. Probably the only true dud on the album featuring generic lyrics, generic music, just a flat-out generic song. The best track on 'So Long, Astoria' however is not an original, but rather a cover of Don Henley's 1984 hit "Boys of Summer". Kudos to The Ataris for bringing back a great song and making it kick so much @$$, almost as much as the original. The lyrics were even updated ("deadhead sticker" to "Black Flag sticker"). In my opinion "Boys of Summer" is worth the cost of this album alone. The song can even be heard now on modern rock radio (blarg!).

'So Long, Astoria', shows the influence and promise of the Ataris' early indie roots with some of the most provocative and emotionally powerful rock songs this group has ever written. Sure this isn't for everyone, but if you are a true fan of the band, you can accept the group's matured songwriting and musical style. If you are biased towards major label pseudo-emo, 'So Long, Astoria' isn't for you; this is a record for music lovers.