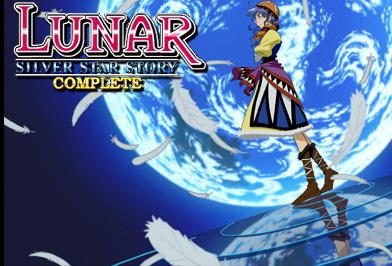 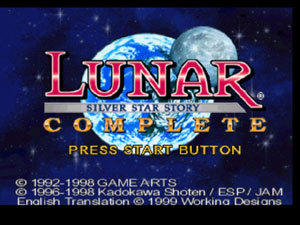 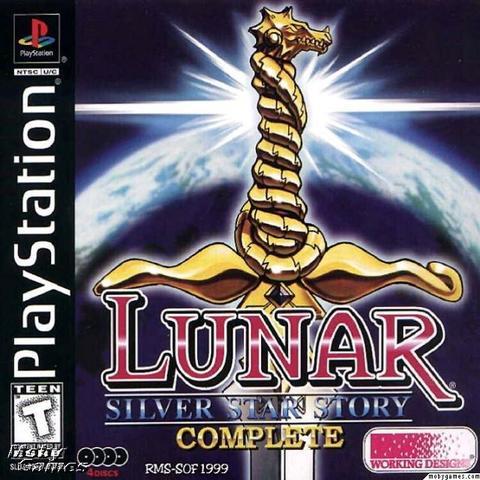 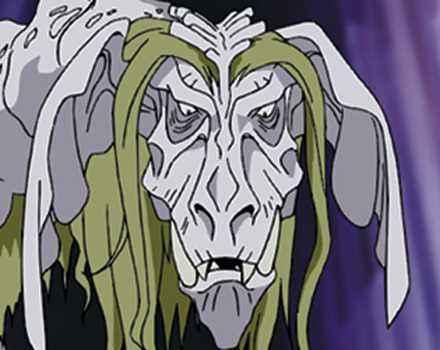 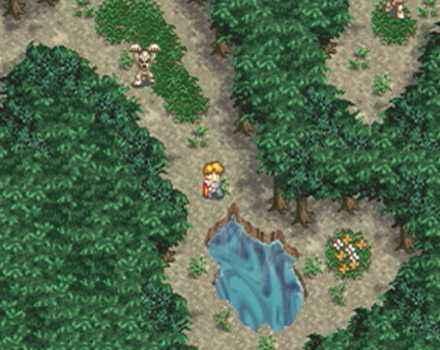 That's right, you heard me, MORE. We'll start off with graphics. On the graphical front, it's a quasi 3D/2D system going on here. The graphics aren't bland like Super Nintendo 2D, but rather they pop out and show more depth, which is useful to show off the games great environments and spacious levels that you get thrown into along your journey with Alex and his friends. Keep in mind that this is one of the places that you may have to check yourself at the door, because not many people like the flat 2D look. But if you give the flat graphics a chance, there's more of a compelling story to unfold.

Which brings us to the story. This is where Lunar REALLY outshines the others. This is the story of a young boy named Alex, who goes on a quest to become the world's newest dragonmaster, but to do this, he has to venture past his home, past his best friend Luna and other things he's grown accustomed to all of his life. Not only that, but he ends up biting off more than he can chew. Alex ends up going from the ends of the world just to try to ensure that everything he cares about stays intact. Alex meets up with a large variety of allies along his quest as well. Kyle, the manly swordsman, Jessica, the tomboy who has a heart of gold, Mia, who has trouble always being the center of attention, and Nash, the egotistical magician; so good times are certain to unfold. The group faces off against the ruthless Vile Tribe to save the world of Lunar and hopefully bring peace to its people once again.

Another area that Lunar shines is its exceptional soundtrack. If you've played an RPG that has only a few reusable songs for every situation, whether its in a sorrowful death of a character, joyful village, or a dark forest, you realize that music plays a big part in the development of a story. Lunar shines though. Every song has a special meaning and helps add to all those times in the story that drive forward and add more to the overall package. Overall, I thought the music was wide and sweeping, and it really helped to convey the overall emotion that was supposed to be felt by the player and the characters in the story. The developers also included a soundtrack CD with the game, so that you can listen to the music whenever you want. If that isn't a testament to the greatness of the soundtrack, then nothing is.

Replay value is one area that may be a slight drag on Lunar's greatness. Not that there is a lot of stuff you can miss on your first play through, but if you happen to play with a guide, or if you are a player who is a perfectionist, then you won't have very much to do the second play through. There is only one ending, and sadly you cannot make any decisions to affect the outcome of the story. The story is a gem for sure, but small things like this only serve to hinder a great game.

Well, other than the story and the graphics, gameplay sinks all the others. Not only does it offer powerful battles against a variety of creatures, but you do it without getting bogged down and tired of doing the same old thing, battle after battle. The game manages to expand on the traditional turn-based combat engine, and this makes everything flow more smoothly than the whole "your turn.... my turn" problem. Besides battle mechanics, you have the ability to not only quickly battle enemies in fluid combat, but also avoid the battles all together, which is a plus for many players who think random encounters are rigid or break up the flow of gameplay. Many gamers, including myself, find that the optional battles are easier and make things more user friendly. The optional fights do indeed come in handy, much like Final Fantasy VIII's level up system. With every level that Alex obtains, the boss levels are affected, so it's wise to think strategy when going into each and every battle.

Other than that, I give Lunar: SSSC a pretty good score. I mean, it isn't as pretty as the newfangled RPGs, but it has a heart of gold, and it surely will not disappoint. So if you're looking for an older RPG or just a game that has a great story and merit behind it, try Lunar: Silver Star Story Complete.
Review Page Hits: 1 today (359 total)
mediahook