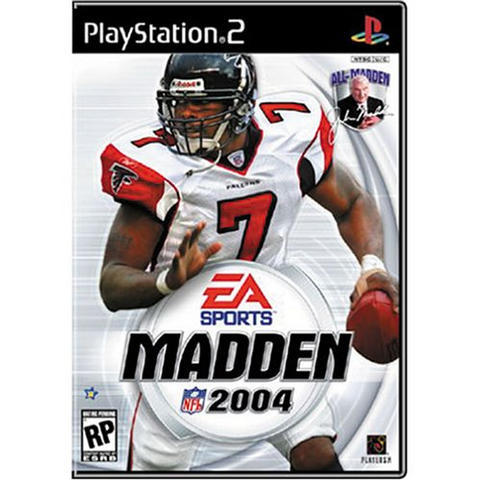 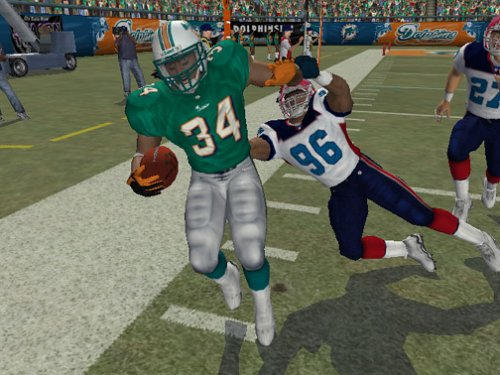 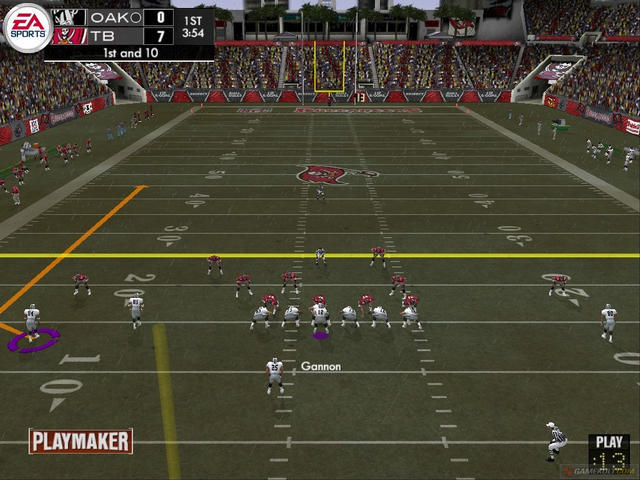 The eternal battle of the premier football simulators rages on. Some people prefer Sega's ESPN NFL Football, a few (and I mean a few!) enjoy the Xbox exclusive NFL Fever, and even Sony's 989 Sports has contributed with the annual NFL Gameday series. But there is still one football title that outsells all of the previous titles combined and then some. I'm talking about Madden NFL 2004! Specifically, the PlayStation 2 version which is different than the Xbox, GameCube and PC versions. If you ever wanted to lead your favorite NFL team to the Super Bowl, this is the game to do it with.

First things first. Let's talk about the on-field A.I. improvement this year which is critical to Madden's success as a football simulator. One common complaint in last year's version was poor play by the secondary. Too often someone could send a scrub receiver down the field and catch the ball in heavy traffic. EA Sports promised to fix this problem last year and kept its promise. Defensive back A.I. is vastly improved and defenders are much better at covering receivers. Now this doesn't mean that putting one defender on a star such as Randy Moss will keep you safe from the bomb but it does mean that effective playcalling will go a long way in stopping the vertical game. Another nifty improvement this year is tackling. I call this the "Roy Williams Feature." No longer do receivers fumble the ball at the same rate regardless of how they were tackled. EA Sports has reduced the rate of fumbles from receivers dragged down from behind and boosted the rate of fumbles from receivers who are hit head-on by a defender. This further enhances the game's A.I. and provides for a more realistic football game.

Another common complaint in last year's edition was that running was too difficult. In fact, some players have defected to Sega's ESPN NFL Football because they claim running is too hard in the Madden series. This is a matter of opinion because most Madden die-hards will tell you that running is realistic in the game and they are probably right. Tailbacks shouldn't be able to run for 100 yards every game, good blocking should be rewarded, and defenses should be able to quickly swarm to runners. The running game in Madden is not newbie-friendly. In other words, it takes practice and an appreciation of blocking fundamentals. More than any football game out there, Madden rewards players who wait for their blocks to happen and good field vision is an essential trait of any player who wishes to succeed with their running game. While it can be difficult to master, as long as you're playing the CPU, you can always decrease the difficulty level to make it easier and adjust it back up as you get better.

This year's version of Madden saw a dramatic change as, for the first time ever, an in-depth owner mode was inserted into the game. Owner mode allows a player to more fully participate in the annual general manager proceedings of their favorite team. In owner mode, you can hire coaches and offensive/defensive coordinators, set ticket prices, build and design a new stadium and also give your current stadium exclusive naming rights. Owner mode options don't take too long to manage and are a fun and creative way to enhance franchise mode which can sometimes drag on because of the sixteen-game schedule.

Let's face it, playing against the computer can be boring. Nothing beats a human opponent! And now that consoles are entering the online world, Madden NFL 2004 comes equipped with an online mode that allows a player to find a game 24/7 as long as they have the network adapter on their PlayStation 2. This is a free service and a quick user-created name and password along with an e-mail address will get you signed up for EA Sports online match-ups. Once online, you can download updated rosters, enter chat rooms to find a game, and even enter online tournaments. It sounds great, but there are a few negatives about online play. Unless you talk to an opponent first, chances are you'll end up with an opponent who doesn't play "str8 football" which is the term in Madden for realistic football. There are always plenty of goofs who will try to get away with unrealistic substitutions, going for it on 4th and 10, or running the same play over and over. Those types of players are hard to avoid and they're too rampant in the PS2 Madden lobbies. The best way to avoid these types of players is to browse Madden community sites and join a PS2 league with rules on how players can manage their team in a game. You can find links for some of those leagues in this review.

The graphics in this year's Madden are on par with previous games in the series. The graphics won't set any records compared to some of the more artistic games in the PS2's lineup, but they're good enough for a football game. The sounds of the game are good but not spectacular. Tackles have a bone-crunching noise, the home crowd goes wild after touchdowns, and the Monday Night Football team of Madden and Michaels provide commentary on the game. EA Sports didn't do much to fix the in-game commentary and it can be annoying at times. It still doesn't compare to the ESPN NFL Football series which takes game analysis to a whole new level with Chris Berman's Halftime Show. Also, keep in mind that Madden NFL 2004 is available on all consoles, but only the PS2 version comes with online play. The GameCube and Xbox don't even allow online updated rosters. The PC version is the only version that is also equipped with online play, not to mention it also allows greater customizing and league management. It's up to you as to which version you prefer.

I've played all of the popular football simulators in today's market and I always come back to Madden. I find that no game has yet to match Madden's gameplay. If you're a football fan and a competitive person, you'll love Madden. I live and die by my team's success in the video game world as much as I do the real pro team that I watch. No game has a community of more fiery and cutthroat competition than the Madden series. Because football season is over until the fall, Madden NFL 2004 on the PS2 is easier to find compared to only a few months ago, and there are several copies available at the Game Trading Zone. Do yourself a favor and pick one up. You won't regret it.
Review Page Hits: 1 today (232 total)
mediahook