The title of Atlus' latest localization gets straight to the point -- you WILL be crying tears of blood. 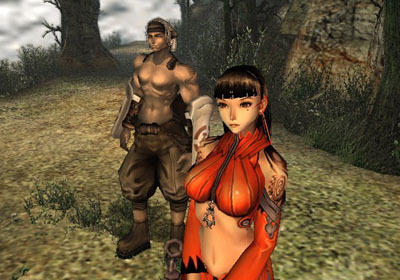 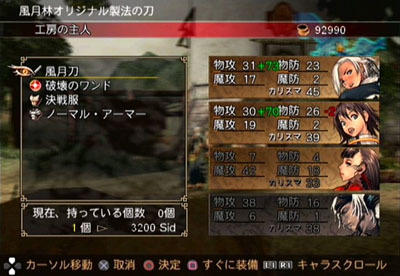 The story is one of the only semi-high points of the game. It's a very basic and predictable RPG storyline, but it's done well. Atlus did a very good job translating all the text in the game, and it shows.

You play as Calintz, lead mercenary of the Tears of Blood, who all have a strong hate for the Yason, a new race of human-like creatures. The Yason and humans have been unable to co-exist peacefully for many years, and war between the two rages across the land. The Alliance army (human side) discovers a way they may be able to end the war for good -- using the 'forbidden magic' to destroy the Yason race. When this backfires, it is discovered that the ruler of Yason-Roven (the region of the land where the Yason live), Queen Amila, used the Magna Carta to stop it. The Magna Carta is a legendary form of magic that nobody was supposed to be able to employ. The Tears of Blood (who are pretty much lackeys of the Alliance army) are sent on a mission to investigate what happened, and to help put an end to the war between Humans and Yason. Shortly afterward, Calintz discovers an amnesiac girl named Reith hidden away in a cave, and the story progresses from there. I don't want to give too much away. Otherwise, you'd have absolutely no reason to torture yourself playing this game

. Then again, nearly every plot twist and development is blatantly obvious, so maybe I wouldn't be spoiling anything.

The lowest point of the game is that nearly every aspect of the gameplay is absolutely pitiful. It's like Softmax took everything RPGers hate about the genre and mashed it all together into one big disc of crap.

First, we'll start with the battle system. It's an active-turn based system akin to Grandia in some ways, but don't get your hopes up. It uses a new concept called Chi (which Atlus decided to change from 'Khan'). There are 8 different forms of elemental energy that directly affect your ability to attack and do damage. Each zone has its distinct elemental properties, but they are changeable through the manipulations of Chi Lanterns. This concept was a good idea, but it should have been used in a better game. Three characters participate in battle, but you're only able to control one character at a time...and there is no option for an AI partner. In a more active than turn-based system, this does not work well. In order to deal damage, you need to properly and accurately complete a 3-button combination (or a much longer one if you decide to use a special move). This may sound like a refreshing change from the general menu selection, but it forces battle to move extremely slowly, and gets very repetitive. Even the simplest of battles can take what seems like forever to complete. Even worse, the escape feature works maybe 5% of the time, and enemies are nearly impossible to dodge on the field. That leads me nicely into my next object of discussion: the field system.

Magna Carta is one of those games where you can see enemies on the field, and avoid them if you don't feel like going through another battle. However, Softmax pretty much negated the positive aspect of this by making the areas so enclosed and linear that it's nearly impossible to avoid any battle. There are 2 ways of moving about fields -- detect mode (the absurdly slow method you'll be using for most of the game), and dash mode (the speedy mode you wish you could be using for most of the game). In detect mode, you have a wide range of view, but move very slowly. This enables you to see enemies before they see you, giving you the opportunity to surprise attack them, or attempt to avoid them. In dash mode, you're running quickly, but can't see any enemies or treasure chests. If you run into a baddie while in dash mode, they will surprise attack you, preventing you from moving while they dish out a few attacks. When you're already in a pissy mood from battling so much, moving slowly and being unable to avoid enemies are not good things.

Another negative point of the gameplay is the monotony of everything. Zones are re-used so much, it's unbelievable. If you think backtracking in Metroid or Castlevania is annoying, you've got another thing coming with Magna Carta. You're required to fully complete each dungeon (there are a few of them) twice, and trudge though most other zones (full of enemies) an average of about 5 times or more. What adds on most of that backtracking, is that Reith and Calintz's parties eventually split up, and you take turns playing both of them. Calintz's party will be overly powerful, and will make mincemeat of any bad guys that may get in its way. Comparatively, Reith's party vs. bad guys is like taking candy from a baby. You will have your ass handed to you an innumerable amount of times. The unskippable cut-scenes can be frustrating too if you've died and are re-doing sections.

The last thing I'll say in the gameplay section is more of a warning -- level all your characters evenly. If you don't, you'll regret it when it comes to last boss time. When your patience for the game --especially the battle system-- has risen feet above your head, having to go back and power level your weaklings will not be fun, and there's almost no motivation to do so. The gameplay is so horrendous, it's unforgivable. I seriously only finished this game for two reasons:

A) I didn't want the $65 I spent on it to be wasted
B) I feel you need to finish a game before you can fairly review it.

I'll say it right now, Hyung-Tae Kim's art is absolutely beautiful, even if it is difficult to separate the men from the women

. The game's character models don't do his artwork justice (they actually look kinda creepy), but Magna Carta is, overall, one of the best looking games on the system. The environments look great, no matter how small and linear they are, and all the effects are wonderful too. The CG cut-scenes are breathtaking, but you see less than five in the entire game, and they're all quite short. Even better, the game supports progressive scan.

Another very low point for this game. I don't know how they managed to do it, but Atlus has officially discovered the worst voice actors in all of North America and brought them together for this game. Yes, this is the worst voiced RPG (and possibly console game) of all time. After producing the highest-quality dub in RPG history (DDS), Magna Carta is a huge letdown. All the characters are completely devoid of all emotion, their dialogue has improper use of inflection, and they have absurd pauses between sentences. Why they decided to put in these massive pauses between lines...


baffles........me. Atlus, never give these people work ever again. Please. My ears are begging you.

That being said, the soundtrack consists mainly of generic RPG fanfare, but there are some nice tracks that stand out (boss battles, for example). There's clearly a reason Atlus didn't include an OST disc with the deluxe package.

At a play time of 45 hours, and no features after finishing, you will never go near this game ever again. 'Nuff said.

A really lackluster title that Atlus, for some reason, decided to bring us. Shame goes out to Softmax too, for creating such a craptacular masterpiece. Thanks for the torture guys. Thanks.

In case you didn't catch it, this game is a pass. If you see it in the game store, don't even enter. STAY CLEAR! TOXIC MATERIAL PRESENT!