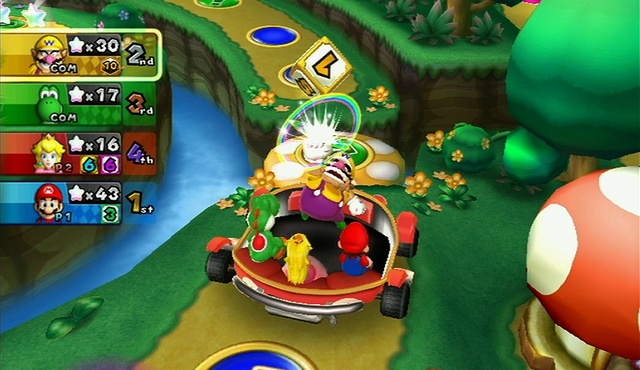 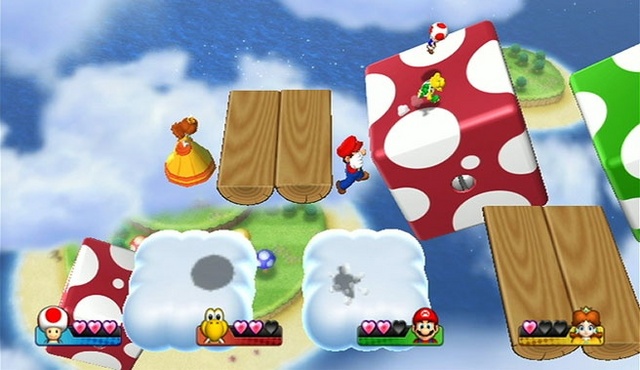 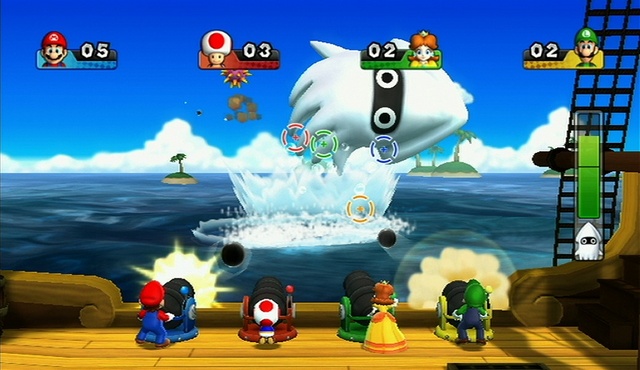 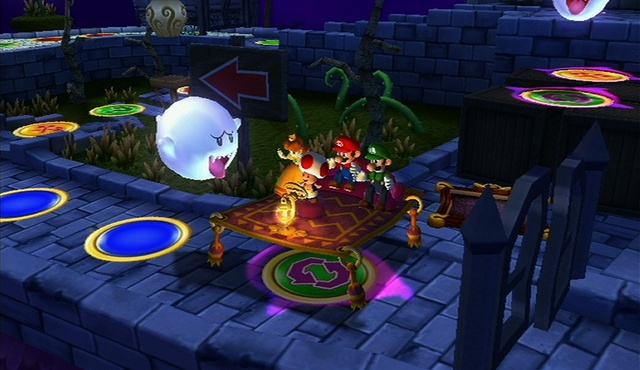 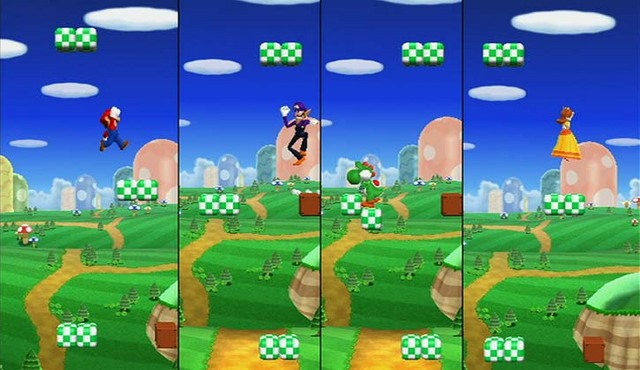 Nintendo is one of those companies whose fans are almost impossible to please. Make a change with one of Nintendo's franchises and the game sucks. Make no changes with one of Nintendo's franchises and the game is a rehash. Therefore, Nintendo must constantly walk a tightrope between tradition and progress, and it is almost a fool's errand. A good portion of their fan base is simply insatiable. Mario Party is one of Nintendo's biggest properties, and it is also one of the franchises that is most stagnant. Finally, Nintendo and developer ND Cube are mixing up the formula. While the execution is clearly off, it is a welcomed change.

Mario Party 9 introduces a brand-new mechanic to the tried and true formula of the series. This time around, four players ride around in the same vehicle across mostly linear boards. Each player takes turns being the captain with the goal of collecting Mini Stars during their turn while avoiding the dreaded purple Mini Ztars. This creates a fair bit of strategy. As a captain lands on a blue space, they earn a special dice block. These can be dies that grant the captain a guaranteed roll of a 4, 5, or 6, a die that rolls a 1-10, a die that gives the captain a 0 or 1 roll, or a die that rolls a 1-3. Using dice blocks smartly is key to screwing over your opponents. Perhaps there is a batch of five Mini Ztars four spaces ahead of you and you have a 1-3 dice block. If you use the block, you might force the next player in line to get those Mini Ztars which take away Mini Stars from the unlucky victim's total. Be careful, though, as your fellow passengers can mess you out of Mini Stars as well.

Mario Party 9's boards are set up as an adventure for players. Some have you driving through a flower-covered field in Toad Road while others have you riding on conveyor belts in Bob-omb Factory. There are seldom opportunities for split paths. The game's boards are incredibly linear. The main objective is to get from Point A to Point B while attempting to mess over your traveling companions through making them pick up Mini Ztars and performing well in Captain Events. More on those later. The game doesn't end when you reach a set amount of turns. It ends when you reach the boss at the conclusion of the board.

There are two Boss mini-games that occur on each of Mario Party 9's seven boards. The first happens about halfway through a given board while the second takes place at the very end. Boss mini-games are essentially battles against one of Bowser's many minions including Lakitu, Whomp, King Bob-omb, King Boo, Blooper, Chain Chomp, among others. While you do work cooperatively with other players, the goal is to score the most hits/get the most points to win the most Mini Stars. For instance, in Cheep Cheep Shot, the aim of this game is to tilt the Wii remote to swim around, grabbing green shells to chuck at a giant Cheep Cheep fish while dodging its advances. Meanwhile in Wiggler Bounce, you ground pound on the individual sections of the titular boss to score points. Getting the final attack on a boss nets you extra points.

Unlike past Mario Party games, you don't participate in non-Boss mini-games after all four players have taken their roll of the dice block. Instead, mini-games are either played by landing on a marked mini-game space or by landing on a blue space, picking up the present with special dice block, and finding a mini-game inside said present. Mini-games also are scored differently. First place gets the most Mini Stars, second place gets the second best amount of Mini Stars, third with the third most, and last place gets table scraps. There are three types of non-Boss mini-games in Mario Party 9: Free-for-All, 1-vs.-Rivals, and Bowser Jr. games which pits two players against Bowser Jr. Win and you get five Mini Stars. Lose and you part with five Mini Stars.

There are eighty or so mini-games in Mario Party 9, and for the most part they control really well and are fun to play. Speeding Bullets puts you on a swift Bullet Bill with the object to tilt the horizontal Wii remote to move left and right across dash panels while dodging Piranha Plants and the pipes they come out of. Skyjinks harks back to New Super Mario Bros. Wii and Platform Peril from Mario Party 1 and 2 as you jump on moving platforms, trying to stick with the scrolling screen and make it to the goal intact. Other enjoyable mini-games include the snowmobile-riding race Snow Go, the new sport that is sweeping the Mushroom Kingdom, Goomba Bowling, the ride-the-dolphin Ring Leader, and football-inspired Tackle Takedown. Some games just do not work well at all, however, like Don't Look. The premise is that your character must look a direction that the on-screen arrows do not point to. This is easier said than done as you have to jerk the Wii remote in the desired direction. When I moved the Wii remote up, my character looked left. The Wii remote just cannot read movements like this apparently. Then there's the flurry of luck-based mini-games like Pier Pressure, Pinball Fall, and even some Boss mini-games that involved chance and not skill.

Speaking of chance and not skill, Mario Party 9 is the textbook example of this concept. Captain Events fill every board. These are great chances to pick up a sizable amount of Mini Stars, but unless you are filled with luck, you probably won't get them. Then there's Lucky and Unlucky Spaces. By far the most despicable turn of luck comes from board events and Bowser spaces. The latter happens on the last leg of each board. Bowser fills up to five spaces (sometimes having three spaces in a row full of them) with his sinister spots. You can lose half of your precious amount of Mini Stars from one unfortunate roll of the die. What is the point of playing the first 3/4ths of each board when the last 1/4th is what usually determines the game? Don't even get me started on in-board hazards like rising lava in Magma Mine that if you are the one who doesn't roll a high enough number to escape it, you lose half your collection of Mini Stars. Well, technically I did get started on it...

Point being is that luck is a bigger factor than ever in Mario Party 9. This makes the game's Solo mode an effort in frustration. This mode is one you have to play and complete if you want to unlock the two secret characters, Magikoopa and Shy Guy. In Solo mode, it is not so much that you must win each board, but it is that you must not let Magikoopa or Shy Guy win. Given how each board's winner is determined in the last stretch, this is infuriatingly stupid. Buy Mario Party 9 if you have wins, and stay far away from the Solo mode unless you love having bulging veins come out of your forehead and severe migraines when the AI "somehow" gets yet another lucky roll.

Mario Party 9 is a much better looker than its previous Wii installment. Character models looks sharp, boards are colorful and full of life, detail, and impressive effects, and when the action intensifies, there is no framerate hiccups to speak of. The world of the Mushroom Kingdom definitely comes alive. This is a nice visual experience definitely. As for the sound side of the spectrum, Mario Party 9 boasts catchy and cheerful tunes. Toad Road remains close to my heart as does several of the boss themes. Character quips aren't grating either. Overall, the ninth installment of Mario Party is a decent showing of the Wii's ever-aging hardware.

The change to the stale structure of past Mario Party games is a very fortunate one. It adds a layer of strategy and a much obliged new feeling to the stale formula. That said, Mario Party 9 is best played with friends as alone the game is maddening. Most of the time each game is reliant on the last few rolls, and the best player almost assuredly will not. If you can accept this caveat, Mario Party 9 has mostly marvelous mini-games, a great supply of unlockables that are purchased via Party Points earned through playing the game's boards, and a quite capable presentation, so bring your noisemakers, bright, pointy hats, and get ready to party hearty with Mario and his pals.
Review Page Hits: 0 today (570 total)
mediahook